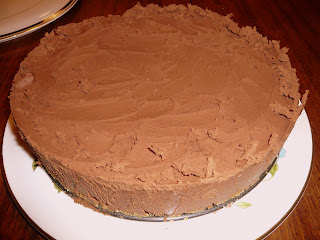 It was my Grandfather's 'official' birthday yesterday (ie the day he chose for his party!), and I volunteered to help out by making a couple of desserts (watch this space for the other in a couple of days!). The first one I chose was this chocolate truffle torte using a recipe by Delia Smith. You can see the recipe here on her website.

I modified the recipe slightly - I decided to make a more conventional cheesecake type base with hobnob biscuits rather than Amaretti (allergy issues) and because I felt that a second texture to contrast with the rich chocolate would be good. I didn't have brandy so substituted Kirsch. I think theoretically this was a great idea, but nobody could really taste the kirsch. I think if you really like kirsch you should perhaps forget putting it in the cake and just drink it at the same time! (Or as Delia suggests, add some of the kirsch to the cream you are going to serve with the torte).

Method
- Line the base of a 9" (23cm) springform cake tin with baking parchment and grease the sides of the tin.
- Crush the biscuits and mix with the melted butter. Press this mixture into the tin and leave to set for around 30 minutes in the fridge.
- Melt the chocolate with the glucose syrup and alcohol and leave to cool for 5 minutes or so. (I think next time, I might melt the chocolate in two batches - it took quite a long time to melt and I think some of the chocolate may have overheated).
- In a separate bowl, whip the double cream until it is barely thickened. Fold half of the cream into the chocolate mixture and then fold that into the remaining cream. (I did follow this instruction, but found that my cream was perhaps too cold as the whole lot attempted to set almost immediately, which made it very difficult to smooth into the baking tin. I can't really see how to make this easier though - the only thing I can think is to allow the cream to warm up a little, but I'm not sure how well it would whip at room temperature).
- Put in the fridge and allow to chill overnight.
- Just before serving run a knife carefully around the edges of the tin and release the cake. Another pair of hands (or a can to put under the base while you deal with the sides) is helpful!
- Dust with cocoa powder and serve with extra single or double pouring cream. 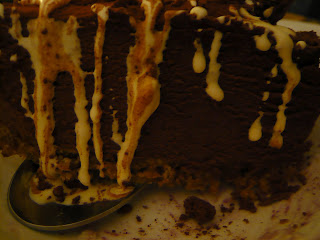 This was T's portion of truffle cake - liberally doused in double cream, the only way to go! The cake is very rich and quite bitter so the double cream is a necessity I suppose! The birthday boy enjoyed it very much, and many others told me how much they'd enjoyed it too. Good job really because it's quite a big cake and there was about half left at the end of the evening, so it looks like chocolate truffle cake for breakfast - what a delicious and decadent way to start the day.
Posted by Caroline at 16:45

this cake is so yummy !! And I love your lemon cake too !!