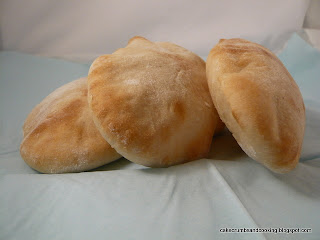 It's been ages since I've made anything for Short and Tweet, the twitter challenge (#shortandtweet) for baking from Dan Lepard's Short and Sweet organised by @EvidenceMatters. Not because I haven't wanted to, just because I'm disorganised! And seeing all of the excellent pictures other bloggers and twitter folk have taken of the various items that I haven't managed to bake yet is making me want to make them even more. 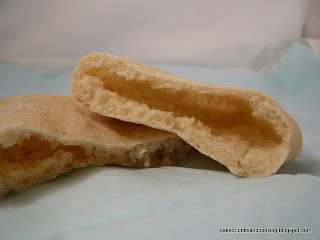 Lovely soft crumb
One of the challenge recipes for this week was perfect plain pitas, but because I've always known them as pittas, that's how I'm going to carry on spelling them. I very first made these years ago, pre blogging. In fact, I think they were one of the first baked items I ever took photos of, and this is simply because pittas are magic. (It was a fairly short step to both taking pictures of food and blogging it...) You place a fairly thinly rolled out dough into the oven, and then as if by magic you remove a puffed up football of a bread. Aside from the scorching heat needed for these they would be loved by small children for the visual spectacle! 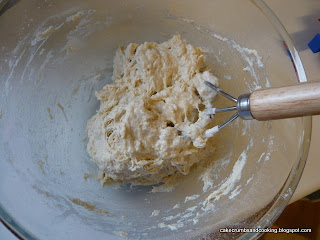 Sticky, sticky dough
Since I have far too much bread in my freezer at the moment (Dill potato, rye sourdough, malted grain amongst them) I opted to make half of the recipe. When I originally made these I used the recipe here, which was originally published by the Guardian in their little 'Guide to Baking' booklet that came out in November 2007. This is a case where the book recipe is identical to the online version. In my half recipe I used 1tsp sugar and miscalculated my water, using 190ml instead of 165ml. Perhaps this is why my dough was wet and sticky. It wasn't too hard to work though. I also missed one of the kneading steps, again with no worries. I remember the pittas as being quite big, so as well as making a half batch I decided I would still make eight. This makes them a more manageable size for my lunch. 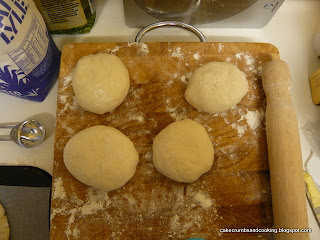 Rolled out and resting
Because the pittas need such a high heat I preheated my oven to Gas 8 (nearly as high as it will go) and placed a baking tray in it to warm up. I then shaped my pitta and placed them on a piece of baking parchment on a second tray, to use as a makeshift peel. I only baked two pittas at a time, and this method of transfering them from their unbaked state to the preheated tray was really successful, and I'll do it again. 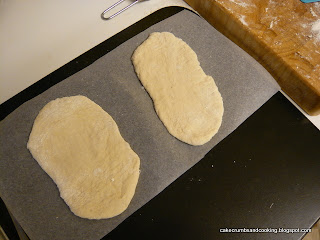 Rolled out on a piece of parchment, ready to slide onto the waiting hot tray in the oven
When they were puffed up and baked through (6-7 minutes in my oven) I took them out and tipped them onto a napkin, covering them with a second napkin to keep soft and moist. 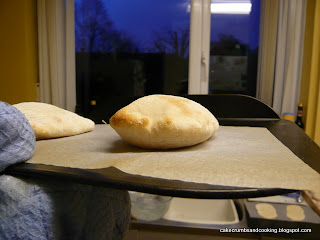 Puffed and golden, set against the gathering darkness, ow, ow, hot!!
Tender and chewy, these are a million miles from the long-life excuse for pitta bread that you find in the supermarkets.  They were just as successful as I remember them, and I had forgotten that they are relatively quick to make - you don't have to bother waiting for the second prove stage, and once you have a little production line going it's quite fun to keep seeing them pop out all puffed up! My one regret is that my oven has a solid door so I can't see the magic happening! 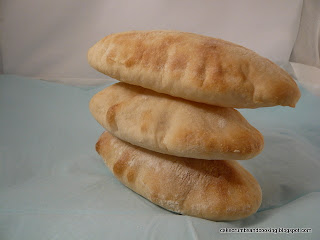 Your pita/pitta look delectable - such a light crumb.

It's easy to overlook how simple these are, even after making them isn't it? It's probably advisable to schedule them in to a baking schedule for a few weeks or so until it's become 2nd nature to recall that they're so straightforward :)

I was enslaved by Dan with this recipe too.... just Perfect! Practical and Magical. Love your photos and the post :)

i've seen a lot of Pitta's (yes, I always spel them like that too) around at the moment and i've never made them but I think now is the moment!

Sigh. Everyone, it seems, gets this recipe right except me. :)

I really like this recipe too! I'm not very good at bread but Dan Lepard has somehow made the process foolproof. We usually eat them with potato and olive stew... yum.

i totally agree, there is no comparison between shop bought and home made. Yours look absolutely delicious!

I want to make these - and you make it sound so easy - though I recently found out that our gas supply isn't great which explains our oven never getting really hot - sigh!

EMatters - I sort of wish I could see the puff, but they're still pretty magical anyway. Yes, ought to remind myself regularly how easy and tasty they are!

Dom - give them whirl - your superhot oven should be just the ticket here.

Nic - they're good fun to try and not too time consuming either.

Celia - I'm sure you're just being hard on yourself! Thank you for the compliment, and I'm sure if I can do them so can you :-)

Dipika - with a potato and olive stew sounds delicious!

Gabi - they're so different to shop bought aren't they!

Johanna - what a pity about your oven. Perhaps you could try griddling them on a superhot frying pan?