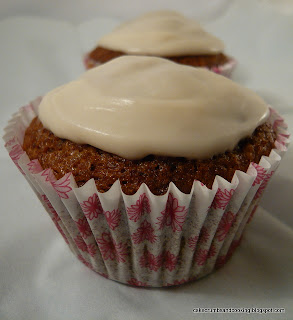 This is the latest installment in the twitter challenge Short and Tweet - baking from Dan Lepard's book Short and Sweet. You can find the blog here, and the whole thing is organised by @EvidenceMatters who spends ages doing the wonderful round ups you can see on the blog each week.
This weeks choices were tailored towards providing a treat for Mothering Sunday (this Sunday 18th March in the UK, although I know that in Australia and the US, Mother's Day isn't until May). They included Saffron Peach Cake, Orange Cassata Cake or Butterscotch Banana Cake. You can find the schedule for March's challenges here. 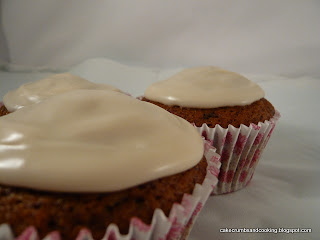 I love my mum dearly, but we've never done much in the way of celebrating Mothering Sunday, and indeed, this year she is jetting off on holiday on the day, so no need for me to provide a cake to celebrate. With other constraints taken into account I chose the Butterscotch Banana Cake. I have made this before (blog post here) and wasn't really very sure of it then (I found it a little oily), but since it seems to take a couple of attempts for me to really like some recipes I thought I'd give it another whirl.
You can find the recipe online here on the Guardian website. The published recipe is very similar. When I weighed my banana flesh I found I had 2/3 of the required amount and it was easy to scale everything else back to 2/3 of the original too. For the wholegrain part of the recipe I used wholemeal spelt flour. I didn't have the specified yogurt, but used a splash of milk instead. Not really the correct substitution at all, but never mind. I also decided to make cupcakes rather than a full size cake as Dan mentions that the recipe works well as cupcakes and gives a time for them to bake. This saved me having to work out what size tin I'd need for 2/3 of the recipe and wondering how long to bake for. 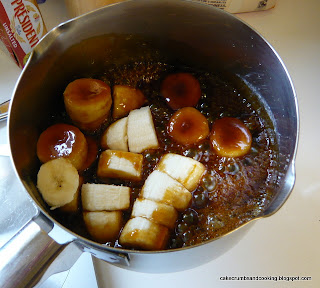 The first step is to caramelise the bananas in a sugar syrup. I was a little wary of the wet sugar syrup splitting and crystallising horribly as has happened in the past, but I was in luck and it didn't. It did seem to take ages of boiling for it to get to the required dark reddish caramel, but patience eventually allowed it to happen. There is always something really satisfying when you start to see the sugar start to change colour into caramel and then the whole pan quickly follows. I cooked the banana for quite a while - not that I was distracted whilst doing it.... Actually, it just meant that the banana broke down really easily. 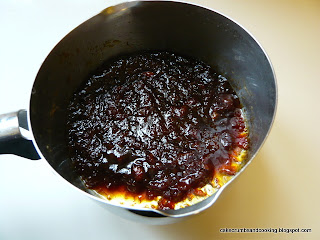 I cannot begin to describe how delicious bananas cooking in hot caramel is. I remember how I almost stopped at this stage last time too - so tempting to just pour this into a bowl and eat with a big scoop of icecream. Instead I scooped it into the cake batter and mixed well: 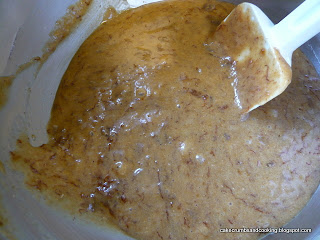 This was then spooned into the waiting muffin cases. I filled them about 2/3 full and really wasn't expecting much of a rise - I think because last time, when I made this as a full cake the middle was a little sunken. 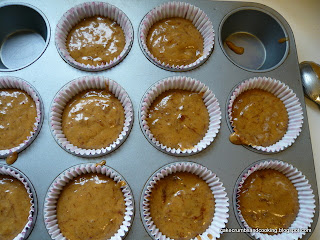 As you can see my 2/3 batter mixture made 10 muffins. And I think I could possibly have squeezed 11 out of the mixture had I been a little meaner when dividing them up. But who wants a mean cake? And I was pleasantly surprised to see a lovely soft little peak on the cakes: 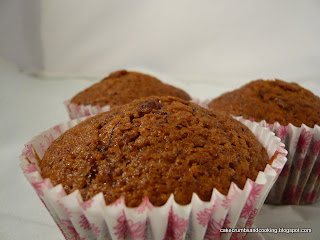 I struggled to know how to decorate these little cakes. When I made the large cake I just left it plain, but small cakes are somehow more demanding of a decoration of sorts. I briefly considered buttercream, but dismissed the idea as too sweet and sickly on top of an already sweet cake. I then decided to make a simple glace icing, but with unrefined icing sugar to give a complementary toffee flavour to that found in the cakes. Sadly, my unrefined icing sugar was clumped and hardened beyond hope of redemption. (And I'm not prepared to whizz it bit by bit in my mini food processor to get it to a useable state again - I don't much enjoy breathing icing sugar!). Back to the drawing board. Then it occured to me that I could use normal icing sugar with a little golden syrup to bring that toffee-ish flavour to the icing. Yum!

So my icing for these buns consisted of about 150g icing sugar, a tbsp of golden syrup and enough water to make a thick icing. It was a tasty icing, and one I'll have to bear in mind for future recipes too.
Verdict? Great recipe - quite time consuming in terms of making the caramel, cooking the banana in it and then leaving to cool but once that bit is done, it's plain sailing. You can see from the picture below just how rich and moist the interior of the cake is - the reddish brown of the caramel definitely comes through. They are light, very banana-ry and very moist and I didn't find them oily at all this time. Sadly I just didn't like them all that much. The cooked strands of banana in the cake were a little offputting and gave a texture I just wasn't keen on. However, this is entirely a personal thing because one of my colleagues said that she thought these were possibly the best cakes I have ever taken to work! I'm glad I gave them another go because I've changed my mind on a couple of things after giving them a second chance, but I'll stick to a more standard banana cake recipe from now on. 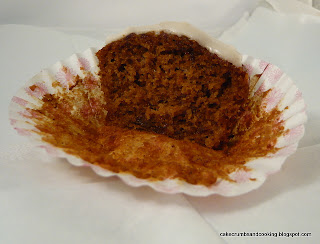 Personally I would have take the pouring-it-on-icecream option! That caramel banana goo looks absolutely divine.

Wow that banana caramel mixture looks fabulous. Never seen a method like that before. Shame you weren't keen on them, but as you say its personal preference

They sound lovely! Bananas & caramel is one of my fav things :) x

The bananas in caramel sauce sounded v interesting - maybe you just need a plain sponge cake and serve it with the sauce poured over it. Though the actual cake sounds lovely to me too.

That banana caramel really does look wonderful. I must try this recipe or maybe just the caramel with the ice-cream.

I'v made this a few times too C- and I still can't make my mind up on it. Don't get me wrong, it is a very nice and tasty banana recipe, but as you say it isn't the quickest of bakes and is a little faffy really... But I absolutely agree the hot, caramelizing bananas are a thing of beauty...

I love banana and caramel. Genius idea with the golden syrup icing. Your cake looks delicious! I'll have to give this a go one day.

They look very appealing, C, even to a non-banana lover like me!

I can almost smell that caramel from here, the cakes look fabulous!

I thoroughly enjoyed looking at your illustrated account of this bake. Your suggestion for a topping for the small cakes is very helpful because I dislike over-rich buttercream icings and typically find a glace icing to be too sweet. You're right however that these cakes needed something to 'finish' them.

Thank you for allowing me to include your photograph and write up in Short and Tweet 20 compilation.

I made these at Christmas, also as cupcakes for our next door neighbours. I've got a picture on my Chirstmas Hampers post, but that's about all as they don't contain chocolate. There was so much batter, I got to make quite a few so I did try one and even though banana cake is not my favourite, I really liked this. I'm cross with myself now for not keeping up with shortandtweet as I've made these and the cassata cake - hey ho, just so much to do!