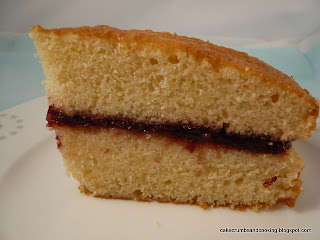 I recently bought 'Bake!' by Nick Malgieri, after it was recommended by Celia. I have had a flick through it and there are a number of the recipes that I'd like to try. One of them was 'kyra's hot milk sponge cake' in the chapter on Sponge and Meringue Layers. I was interested to know how the process and texture of the cake would compare to the ones that I make as my standby recipe (Victoria sponge proportions: 2 eggs/120g fat, flour, sugar). 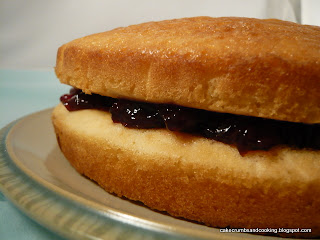 It is described as 'the easiest and best-tasting sponge layer you can imagine' and I was interested to see if it lived up to this claim! However, I didn't actually make the recipe from the book. By complete coincidence (and I actually can't remember how it happened - I imagine I was either reading someone elses blog, an online forum or it was something to do with Twitter) I ended up reading an article Nigella Lawson wrote in September last year about this exact recipe (here, scroll down to see the article, the page appears to be blank at first). Since she says that she had simplified the method somewhat and had also baked in two 8"(20cm) tins rather than the 9" (23cm) tins specified in the book, I decided to go mostly with Nigella on this one. 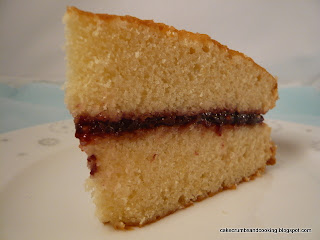 I think that next time I will perhaps allow the butter/milk mixture to cool a little more - there seemed to be a few tiny flecks of bright orange that I am assuming were cooked bits of egg in the final sponge and I would also sift my flour (I followed Nigella and didn't bother) and fold it in by hand rather than just leaving the KitchenAid running with the whisk attachment on. There weren't very many flour pockets I don't think, but any is too many really when making cakes like this. 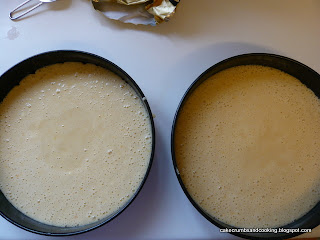 You can see just how runny and bubbly the batter was when I poured it into my tins above.


I found my cakes took 27 minutes to bake and I was mostly pleased with the way they turned out. I filled the cakes with morello cherry jam, but didn't dust the top with icing sugar, because it has a tendency to dissolve into the cake on the way to work and is therefore a bit of a waste of time!
I don't think it was the easiest cake in the world, although it was by no stretch of the imagination difficult to make. I enjoyed it and would probably make it again. I think the texture was closer and more fine grained than the usual sponge I make, and it was interesting to try out a different way of making a sponge cake. There are plenty more recipes in 'Bake!' that I'm looking forward to making. 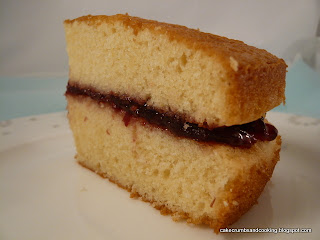 look, just put the rest of it in a tin,get in the car and drive down to Belleau... 2 hours max... the kettle's on!

I don't think I've heard of that book C, I'll definitely keep an eye out for it though and look forward to reading how you get on with the other recipes featured.

I've never heard of that book either, but it looks like a nice sponge.

Looks like it turned out well! Don't suppose you want to enter it in Alphabakes? Our letter for this month is M!
http://www.carolinemakes.blogspot.com/2012/02/alphabakes-challenge-march-2012.html