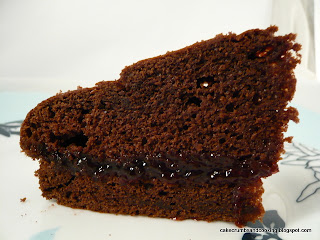 I'm looking for a fudgy chocolate cake recipe that I can fall back on for special occasions. There are already lots and lots of chocolate cake recipes on this blog (see the index at the side - not yet completed for chocolate but getting there), but thankfully, this doesn't stop me wanting to try new ones! There are just so many delicious looking recipes out there for me to try and this is just one of them.
The recipe is published in Pam Corbin's book 'Cakes'. This is one of the River Cottage series of cookery handbooks, and is full of seriously enticing recipes. It has also got some lovely tips in the getting started chapter on ingredients and then a chapter on filling, topping and decorating too, and is generally a good book to read. Well, if you like reading about cake as much as I do that is. 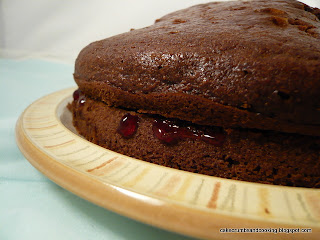 This cake is entitled simply 'Chocolate Cake' but the delicious looking photo makes the cake rather more enticing that the title would have you believe. I made a couple of small changes and a couple of minor errors in the method too, so this is an adapted version of the cake in the book. I decided to make a half recipe as suggested in the variations at the end of the recipe and bake in the suggested 7"/18cm deep tin (this is another lovely feature of the book - there are often ways you can change the recipe slightly to give a recipe another flavour combo, or serve it in a different way - can you tell I'm a fan?!) 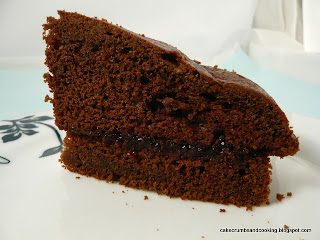 
The original recipe calls for a proportion of ground almonds in the cake, along with either buttermilk or a mixture of milk and yogurt instead of the half fat creme fraiche - guess what I had in the fridge! I made a slight mistake with the method too. I started by creaming the butter and sugar, all well and good, and then added the other ingredients as instructed. When I was pretty much finished I looked at the batter, which was a lovely golden colour and remembered I was supposed to be making chocolate cake. Hmmm! The cocoa powder is mixed with boiling water to a paste and then set aside to cool. Guess who forgot to add it until the last minute? It was supposed to go in after the butter and sugar. Ooops, but no harm done. My cake, in an 18cm tin (I used my new pushpan) was baked in around 40-45 minutes.
I sort of wish I hadn't added the milk, as it curdled the mixture slightly, with being so cold from the fridge and being added at the last minute. Thankfully this didn't seem to matter when it came to eating the cake. 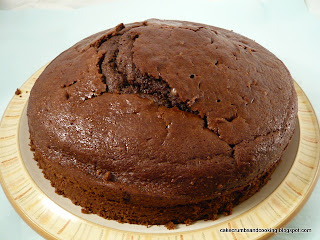 There is a suggested chocolate fudge icing for the cake, but as I ran out of time to make this, I decided to go the simple route and simply split and fill my cake with black cherry jam. As a slight aside, I'm glad it's not just me that has problems with fruity jams with bits in them. Many recipes tell you to allow the jam to cool for a period of time before jarring, to allow the fruit to remain evenly distributed through the whole jar. The makers of Waitrose's Black Cherry conserve hadn't heard this trick and pretty much all of the cherry pieces were in the top third, used for these jammy muffins. So it was effectively cherry jelly that I spread in the middle of my cake. No less delicious for that though! 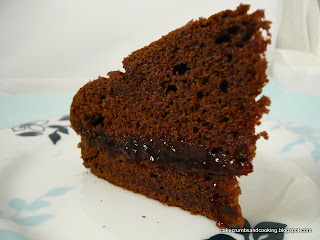 It was a lovely, soft moist cake. Nice and chocolate-y but not overwhelmingly so. I wonder if adding melted chocolate to the recipe would improve the depth of chocolate flavour. I think I would describe this as an excellent afternoon tea chocolate cake - not too rich and not particularly fudgy or gooey but a good light, moist cake. It was lovely with jam, but would be equally delicious with a more decadent gooey icing.
Posted by Caroline at 20:35

This looks great! Your version reminds me of one of Dan Lepard's recipes: http://www.guardian.co.uk/lifeandstyle/2010/may/29/chocolate-berry-cake-recipe-lepard

This does look like a really good chocolate cake! :-)

Love the thick layer of cherry jam in there. All you need for such a richly chocolaty looking cake. Yum! I love her recipes too. Have you seen the one for compost jelly - its a fab idea

It is hard finding the perfect rich chocolate cake isn't it? You'll just have to keep trying, however hard sampling all that cake is!

I still haven't found the perfect recipe, but I do think it needs both cocoa and melted chocolate, plus some yogurt or buttermilk.

Oooh, C, I haven't tried this recipe yet. Thanks for testing it out! It looks glorious with the layer of jam..

Oh I love this cake. I made it with the choccie fudge icing and it was delish. For some reason I haven't made many cakes from this great little book but my favourite is Gill's Honey Cake. Because it contains wholemeal flour, almonds and honey it (almost) feels good for you too!

I can't remember now if I tried this one when I was hovering about chocolate cake, no I think I sent it to my sister who was attempting black forest gateau and wanted a more substantial cake to fill. Not sure if she made it in the end either. When you find the perfect chocolate cake please please let me know. Having said that I will be more than delighted to eat a slice of this one while waiting xx Joanna

When I made this, I was a little disappointed. I've been so pleased with everything else I've made so far from Pam's book, I was expecting a particularly good chocolate cake. It was good, but as you say, not overwhelmingly so.

Dipika - thank you! I actually made the Dan Lepard recipe you mention, but from memory wasn't that impressed with it.

Laura - it was. Emphasis on was!

Dom - not quite perfection. Otherwise I'd have to stop looking ;-)

Katie - I keep meaning to make some of the recipes from the preserves book - as you say the compost jelly is a great idea.

Suelle - it's a hard life isn't it, eating all this chocolate cake! I absolutely agree that cocoa plus chocolate plus dairy is the way forward for the best tasting chocolate cake. More experimentation needed!

Johanna - chocolate cake is one of those things that you think should be straightforward, but the perfect version isn't. Jam in the middle is what my mum often did when we were younger, so is my default filling for a cake!

Celia - thanks! I don't think it would beat your food processor chocolate cake though!

Underthebluegumtree - I think perhaps the choccie icing could be the making of this cake - it would add more richness and chocolatey flavour - yum! It's a lovely book isn't it!

Jo - I wish I could share a slice of this with you. I don't think I'll ever find the perfect chocolate cake - not least because then I'd have to stop looking!

Choclette - yes, good but not overwhelmingly so is just what I thought. Really, really nice, but not spectacular. A good everyday cake I guess.