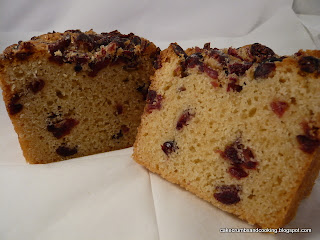 I was searching through various recipe books this weekend, looking for inspiration to bake for a cake sale being held at work today. One of the books in my pile for inspiration was Dan Lepard's Short and Sweet. My criteria for baking were that the item needed to be (relatively) cheap to make, not too time consuming to mix and bake, be sturdy enough to transport without falling apart (getting the bus to work is a pain when it comes  to transporting delicate items or anything involving buttercream!) and have an interesting twist. After all, although I wanted it to sell well I wanted to make something new and different too! 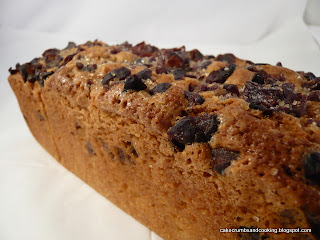 After much flicking of pages, I eventually decided on the Sherry and Cherry cake. I had always skipped past this recipe in the past, assuming (wrongly) that it was a cherry cake using glace cherries. I already have a recipe for a cherry cake that I'm very happy with and didn't see the need for a new one. But when I looked more closely, this was made using dried cherries and as I happened to have (a little) sherry in the house this recipe looked very appealing.
I didn't use cherries though - I used sweetened dried cranberries, sometimes known as Craisins. Simply because I appear to have bulk bought them at some point in the past when they were on special offer, and they now need using up. My sherry (of which I used a touch less than specified because I'm running out!) is a fairly standard supermarket amontillado (the same one as I used for my sherry raisin cheesecake). This is labelled medium dry, rather than the sweet specified in the recipe. Ah well! 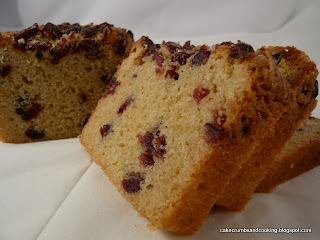 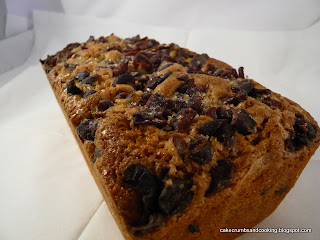 A quick note on tin sizes. I have 2lb loaf tins that have internal measurements of 11x22x7cm at the top of the tin, and two sizes of loaf tin that I regard as 1lb loaf tins. These are a squat tin (traditional style) with measurements 15x9x7.5cm and finally, a broader tin with measurements of 19x9x6cm. It was this final size of tin that I used, with the recommendation being a 'deep, 17cm long loaf tin or similar'. I was pleased with this choice - the cake mix would have been dwarfed in the big tin, and the little tin would have taken ages to cook through. I left my cake longer than specified (about 10-15 mins) but it would have taken longer still in the smaller tin. 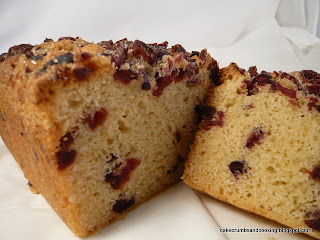 What a lovely cake! The crumb was quite sturdy - making it idea to transport into work for the cake sale and perfect to accompany a cup of tea or coffee. I found the flavour here really intriguing - I didn't really think that the cake tasted obviously of sherry (and wasn't expecting it to - there isn't that much sherry in the recipe!) but there was a lovely, lovely background note of something I couldn't quite identify but which blended really well with the sweet crumb of the cake and the slight sharpness of the cranberries. Overall very successful indeed.
Posted by Caroline at 19:25

It looks really good, I like the idea of the sherry too..

That looks like exactly the sort of cake I can't resist at cake stalls! I am particularly impressed by your technique for keeping the cranberries suspended.

That does look delicious. A nice big chunk of cake to bite into with a cup of tea or coffee.

What a lovely looking cake C. It looks really good with the fruit studded throughout. I'm starting to think of cakes I can make for an event I'm meant to be making the cakes for and was wondering what sort of fruity loaf cake I might make. You had the dry sherry for your cake and needed sweet, mine was the other way around - we should have swapped!

Dan has made quite a few changes to the recipe since it was first in the Guardian, hasn't he? I assume the newer recipe has a technique which works better to stop the fruit sinking. It certainly sounds an interesting cake!

Anna - the sherry was a subtle addition to the overall flavour - recommended!

Foodycat - yes, I love it when the fruit doesn't sink!

Janice - this cake has a particularly rewarding bite too!

Choclette - thank you! I guess we could have swapped sherries, but I don't fancy sweet sherry in my stir fries, which is why I had the sherry in the first place!!!

Suelle - yes, reading through the method on the Guardian website there are a few changes. Plus a couple of ingredient changes too. I guess Dan has had time to revisit and perfect it - first published in 2005!!

That looks a lovely cake. I love the idea of soaking the fruit in sherry first. Sometimes a cake like this is just whats needed. Yum

wow, it does look bejewelled... I love the texture and the weird method obviously worked... and nicely boozy too... you know my address...

Looks like a lovely cake with the addition of the sherry.

What a lovely cake. This is my kind of cake!