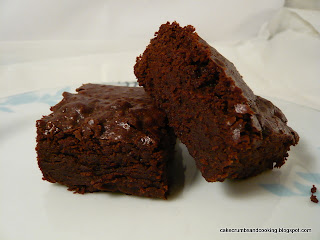 I think that these are the best brownies I have made yet - the name says it all really, fudgy, chocolatey and delicious. I can see lots of tweaks being made to these - imagining peanut butter brownies and mint chocolate brownies - yum!
I came across these brownies on the rather delicious looking blog Maple Spice, and Deb in turn got them from the (now gone) blog Not a Rabbit, but they have been reposted at Cooking Vegan Food Up North too. As the recipe has already been converted into grams and mls for those of us who prefer metric, it was an absolute doddle to make them. 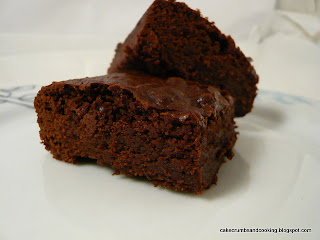 This is the recipe, reproduced with permission from Deb at Maple Spice. The only alteration I made is to substitute light olive oil for the specified veg oil.
Super fudgy brownies
Ingredients
150g granulated sugar - must be this type, not caster
60ml light olive oil
125ml chocolate soya milk
160g dark chocolate -I used a 150g bar of Green and Black's Cooking Chocolate
80g plain flour
2 Tbsp cocoa powder
1/2 tsp vanilla extract
Method
-Line a 7 or 8 inch square baking tin with baking paper (I used a 7" tin) and preheat the oven to 180C/Gas 4.
- Place the sugar in a blender and whizz until it's a fine powder and tip into a large bowl (I did this in a small handheld whizzer in two batches). As the original poster states, do not omit this part, it's what gives the brownies their crackly topping. Having read Deb's comments on Maple Spice I knew this step, although sounding odd, was important. Granulated sugar blended comes out somewhat in between caster and icing sugar - wierd!
- Mix together the flour and sifted cocoa powder and set aside.
- Pour the oil, chocolate soya milk and vanilla into the sugar and mix well.
- Melt the chocolate in the microwave and quickly whisk into the oil/sugar mixture.
- Quickly stir in the flour/cocoa mixture and mix well with a wooden spoon until it all comes together.
- Pour/scrape into the prepared tin and bake for 15 - 20 minutes or until a toothpick inserted in the middle comes out clean. Mine took much longer than I was expecting. At 20 minutes the centre was still liquid and in total I ended up giving it 40 minutes, although it was probably done a bit sooner. I will try and take it out earlier next time.
- Leave to fully cool then refrigerate for a couple of hours before cutting. It wasn't explained why this is. I followed the example of Maple Spice and refrigerated before cutting and they were great. I also stored mine at room temperature. Oh yum. Fudgy deliciousness! And just look at that crackly top too... mmmm! I will make these again (and again, and again) and I will try taking them out of the oven a little sooner too for even more fudgy goodness. I cut them into 12 pieces, which I thought was a good size. My only note would be that these are best eaten on the day of making - after that the cut edges go a little drier (but I think this is true of many brownies) but they are still utterly, utterly delicious! 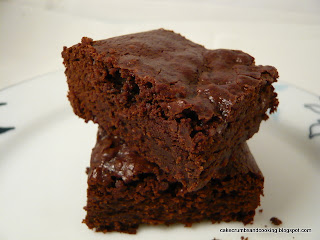 Yummy! I always freeze brownies if I can't manage to eat them all when fresh (which isn't often!).

They do look super delicious!!

These look chocolicious ,I am going to book Mark and try.

I am amazed that you got that lovely fudgey consistency without eggs! Is chocolate soy milk easy to find?

Like Foodycat, I'm amazed these look so good without using eggs. I may have to try them!

I've read that refrigerating brownies helps you to get a sharp edge when cutting.

Claire - I didn't need to freeze them - colleagues helped polish them off :-)

Mr Pineapple Man - thanks, they were!

Foodycat - I was pretty pleased too! Yes, chocolate soya milk is easily available in my local supermarkets - either chilled or longlife. I used Alpro soya chocolate longlife - it comes in a three pack of 250ml.

Suelle - I wonder how these compare to your mayonnaise brownies re sat fat content? I guess they might be similar, but this recipe uses more chocolate than the recipe you use.
I guess that makes sense, to get sharper edges. If they're too fudgy at room temp they'd be difficult to cut.

Oh vegan brownies - it's hard to believe they can be that good without eggs. But I believe you. I've just made some with black beans which were good too, but they did have eggs in them.

Wow they look divine. They use the most unusal range of ingredients I have ever seen in a brownie. Results look fab though

The title says it all - super fudgy brownies, just how I like them! They look delicious!

Just wanted to say they look smashing and I will be trying this - wondering if I can use ordinary soya milk and add extra chocolate /cocoa ... what do you reckon?

Katie - it does seem a bit random, but the result is excellent, and that's what really counts!

Johanna - I think you'd like these, I certainly do :-)

Joanna - I can't see why you couldn't make your own chocolate soya milk for this - try just dissolving some cocoa powder in the soya milk - great idea!!! I wouldn't add more melted chocolate - might change the texture/composition of the recipe too much, but I think adding cocoa powder to the milk would help with depth of flavour.

Cool! It's good to have a tested vegan recipe like this on hand, thanks C! :)

They look awesome - I love the thin crunchy looking topping and, for me, these are the perfect texture

Celia - glad to have been of service!

CC - I really like the fudgy texture too, I think they live up to their name!