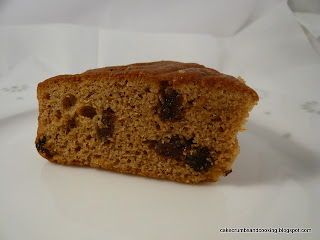 After seeing the Caked Crusader's recent sultana and cinnamon sandwich cake (looks amazing!) I was inspired to make something with similar flavours myself. It's quite scary how easily I can be influenced by seeing something delicious on someone else's blog.
I only wanted a small cake so decided that making up my own recipe was the way to go here. So, inspired by the Caked Crusader here is my raisin and cinnamon cake: 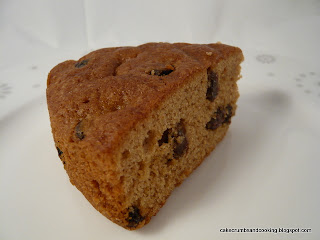 Method
- Preheat the oven to Gas 4. Grease and line the base of a 6" round tin.
- Cream together the butter and sugar until light and fluffy.
- Add the egg, flour, cinnamon and vanilla and beat to combine.
- Stir in the raisins and spread into the cake tin.
- Bake for 20-25 minutes until golden brown and springy. 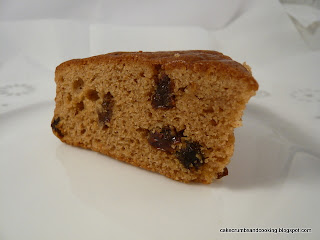 Well, the cinnamon and raisin combo was as good as ever, and this was a yummy, quick to mix and make cake. Quick to eat too!
I think partly what attracted me to the Caked Crusader's cake was the generous amount of buttercream filling in the middle. I found my cake lovely to eat on its own, but very slightly on the dry side - I think I left it in the oven a little too long, I find it hard to judge with smaller cakes when they're done. So to combat this I decided to serve it with some custard. Except I was too lazy to make custard so just spooned one of those caramel desserts you can buy over the top. It may not look the best, but it tasted good. Custard would have been better though! And custard combined with cinnamon and raisins is perfect comfort food for cold weather. 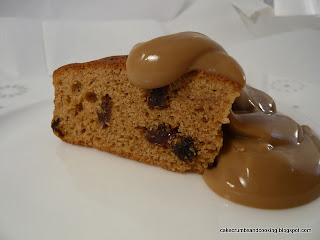 It looks delicous. I would have been tempted to "moisten" the finished cake with maybe a drizzle of honey, or brandy......but custard sounds good !!
Thanks for the recipe, I will give it a try. As you say, it's scary how reading another baking blog can make you feel compelled to put your pinny on !!

I love cinnamon cake. Must try it with the raisins. Looks moist and delicious.

That looks so good!

The crumb and colour on this cake look really good. Perhaps soaking the raisins first, so they didn't draw moisture from the batter, would have stopped the cake from becoming too dry.

I always struggle to determine the end point of cakes, especially when the batter has colour too! I am always inspired by blogs I absolutely love this blogging world! Good choice with the caramel dessert, I bet the caramel flavours go brilliantly!

great idea to use the caramel dessert instead of custard!

Lovely idea to add the sauce. I was drooling at your photos before I read that I was the inspiration...I am flattered, nay honoured!