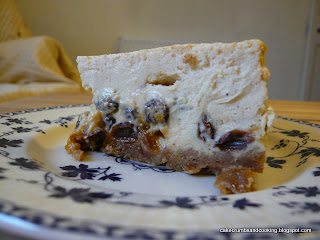 I'm not very keen on traditional Christmas pudding, and my very kind family gave me free rein to create this year's Christmas dessert. I honestly have no idea how I decided to make this particular thing, because I don't like sherry either!
J mentioned to me that she really likes baked cheesecakes, and had previously mentioned that she likes the kind of cheesecake with dried fruit baked in it, so I went with that as an idea. 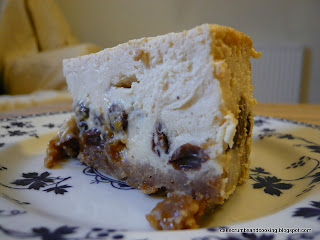 I searched a few sites for a cheesecake recipe, and eventually decided to adapt this recipe on the BBC Good Food website. It seems to have pretty much universally positive reviews and as a relative cheesecake novice, especially with baked ones, I wanted a pretty foolproof recipe. My adaptations were to add the flavours I wanted and to change the tin size - there weren't going to be many of us, and an 8" cake would have been too big. I wanted to halve the recipe and bake in a 6" round, but although being convinced I had one somewhere, couldn't find it and ended up with a 7" springform tin. Calculations told me that I should do 3/4 of the recipe, but I actually ended up with nearer 2/3 of the recipe, which gave a deep enough cheesecake for us.
I made this on Christmas Eve, to allow it to sit overnight in the fridge for Christmas day. I was travelling to family during the day, and so put the raisins and apricots to soak in the morning, making the cheesecake in the early evening. 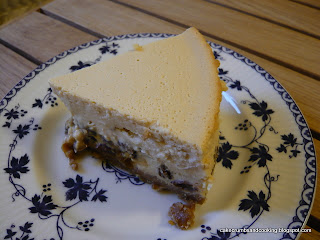 Sherry raisin and apricot cheesecake
Ingredients
For pre-soaking
100g raisins
70g dried apricots, chopped to be about the same size as the raisins

- In the morning, put the raisins and chopped apricots in a small tub and cover with the sherry. Leave to soak. The liquid will not all be soaked up.
When ready to make the cheesecake
- Preheat the oven to 180C/Gas 4.
- Melt the butter over a gentle heat and crush the ginger biscuits.
- Combine the two and press onto the base of a 7" (18cm) springform tin.
- Bake for 5 minutes.
- In the meantime put the cream cheese, flour, soured cream, sugar, vanilla extract, egg and egg yolk in a large bowl. Beat well until combined. Mine did not go fluffy as the website recipe suggests. I just mixed until it was smooth.
- Tip the soaked fruit into the creamy mixture and mix to combine, but don't tip in the remaining liquid sherry - this is cook's perk - drink it if you want!
- Pour over the ginger biscuit base, trying to ensure the fruit is fairly evenly spread.
- Wrap the tin in foil to contain any leaks, unless you're very sure of your baking tins. I'm glad I wrapped mine because it leaked just a little.
- Bake for 40-50 minutes - see notes below. I think I probably left mine in for about an hour.
- Remove from the oven and allow to cool in the tin.
- Refrigerate overnight before serving.


Notes
- I completely forgot to grease the tin, but it didn't seem to matter too much. I ran a knife around the edge to release the cheesecake.
- I overbaked my cheesecake - it cracked fairly deeply, but I'm never sure how much 'wobble' to leave and I would rather over than underbake it. None of us minded the texture (and in fact, I'm not sure how the texture should have been!) 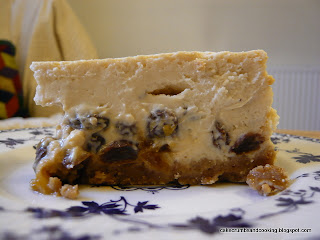 Well, I'm not sure it would pass muster with cheesecake experts but I thoroughly enjoyed this dessert! Which is saying something really, because I really am not keen on sherry or alcohol much in general. Both T and J enjoyed this too, and there were leftovers for a couple of days too, which were very welcome. I will definitely have to experiment further with baked cheesecakes, I had forgotten just how much I love the taste and texture and this was utterly gorgeous. Yum, yum, yum!
Posted by Caroline at 17:15

Honestly, the texture looks absolutely superb - and I am a baked cheesecake devotee!

It looks totally delicious C and a lovely dessert for Christmas dinner. I've never made a baked cheesecake and keep telling myself I must remedy this. One day I will!

Glad you enjoyed it! I love the idea of sherry-soaked fruit. This is definitely an xmas pud alternative that I'd like to try!

This sounds really delicious, and the texture looks fine to me. I've grown fond of rum in baking over the last year, so would probably use that instead of sherry.

Sounds, and looks, very delicious! And what a perfect treat for Christmas. I like plum pudding, but I also love love love cheesecake especially cheesecake with dried fruit in it. What a wonderful idea!

That sounds delicious, I love raisins soaked in alcohol, they are so yummy.

Such a unique and festive cheesecake! Really awesome idea, this.

And now I have dessert sorted for when the family comes around next ;0)

Foodycat - thanks! I'm glad an expert thinks it looks good too!

Choclette - thank you. I ought to make baked cheesecakes more often - so delicious!

Hazel - I'd thoroughly recommend it.

Suelle - I bet rum would be great instead of sherry.

Brittany - Thank you. I really enjoyed this as an alternative to sticky Christmas pudding!

Janice - anything soaked in alcohol seems right at Christmas!

Chele - I hope they enjoy it!

fantastic christmas dessert - just the thing for an aussie christmas - though I do love christmas pudding!