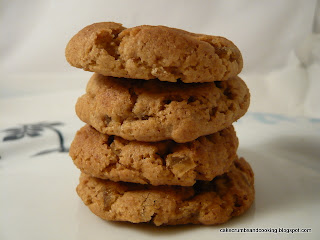 This weeks Short and Tweet challenge (#shortandtweet) organised by @EvidenceMatters (blog here) was either Spelt Ginger Cookies (page 245) or Rye and Raisin Cookies (page 247). Or both, if you're greedy and fancy both recipes like me! 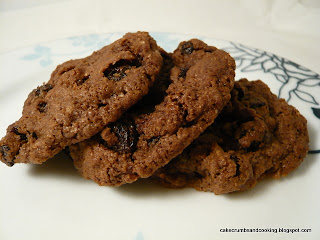 I had seen the rye and raisin cookies before, but for some reason they hadn't really appealed to me. However, this time round the recipe looked like just the ticket. I think that the use of an egg white had put me off in the past - I'm not very good at using up the components of eggs separately - I don't go for recipes where they need to be separated (having had a few failures with cakes needing whisked egg whites in the past) and hence have no repertoire of recipes to use up excesses of either yolks or whites. Happily though (and I presume deliberately) the recipes chosen complimented each other perfectly - the spelt ginger cookies requiring the yolk! Very satisfying. 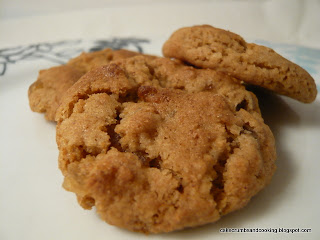 Both of these recipes came together very quickly and easily - I baked them on Sunday morning and was done well before lunch, including the need to bake trays of cookies separately - I think I had about six trays worth of cookies! The spelt ginger ones especially so as they didn't require softened butter or any creaming in the technique. I have to confess that I did actually weigh out the dough into the specified size, so I got almost exactly the number of biscuits given in the recipe. I found that they took seven minutes to bake and achieve the required slightly golden colour. 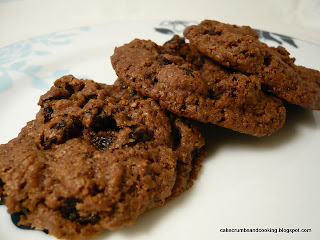 For the rye and raisin cookies I wanted smaller cookies than specified, I made some with 35g of mixture and some with 25g of mixture, spacing them fairly far apart for the first batch. I didn't have any problems with these running together. I then realised that I had forgotten the bicarbonate of soda specified in the recipe and added it to the remainder of the mixed dough. I don't know whether it was for this reason, or perhaps just that the mixed dough was waiting around for a while, but the next couple of batches seemed to spread quite a bit more - with the result that the second tray had quite a few cookies making friends with each other. I preferred them less spread out, so if this was the effect of adding the bicarb, I'd give it a miss next time - I shall have to peruse other people's blogs to find if their cookies also spread out or not! I also found that inspite of making my rye and raisin cookies smaller than the specified size, they took longer to cook. Hmm, don't know why! I baked mine for about 20 minutes - at the specified 12-15 mins they looked very soft indeed. 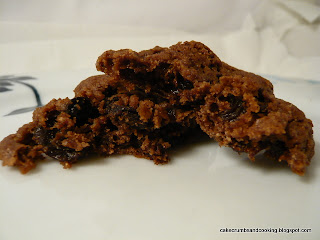 I was prepared not to like the rye and raisin cookies. I don't really know why. Perhaps it's the slight nubbliness of the rye flour (which didn't really come through in these cookies), or my sort-of-indifference to raisins in some situations. Dan notes that if you don't have a very sweet tooth you can reduce the sugar slightly. I reduced the quantities of both types of sugar by about 15g and thought the cookies were still lovely and sweet. Well, I was pleasantly surprised because these were delicious. The rye, raisin and chocolate blended really well flavourwise, and the texture of slightly crispy and sugary and then chewy raisin was great. 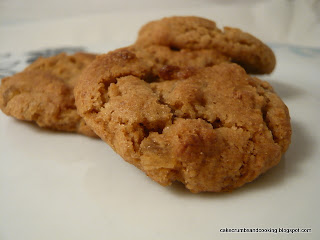 I hadn't seen the recipe for the spelt ginger cookies before (I don't think it's a recipe from Dan's Guardian column) but a little googling will find it without too much trouble. I have to say that of the two recipes, this is the one that really, really appealed to me. And I wasn't let down. I love ginger flavoured cakes and biscuits and these were really good. I had a couple almost straight out of the oven and they were utterly delicious - slightly crispy edges and a great chewy centre, gently spiced with ginger and lovely little nubbles of stem ginger to add a bit of bite. My only regret was that after only a couple of days they had softened significantly and were just chewy without the delicious contrast of crispness round the edge that I had so enjoyed the first day. I wonder if they could be re-crisped in the oven? It seems a shame because the recipe makes quite a large batch and it would be nice to keep them for a week or so. Aside from this they were superb. 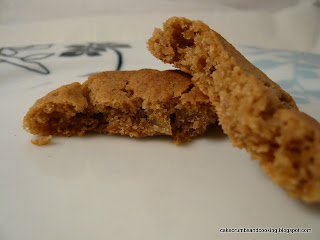 The use of wholemeal flour (rye or spelt) in these biscuits doesn't make them health food by any stretch of the imagination, but the knowledge that you are taking on a little more fibre than might be expected from a sweet treat does no harm, and without being told that these recipes were made with wholemeal flour you certainly wouldn't have guessed. I fear that I am beginning to sound like a scratched record, but both of these recipes were excellent and I wouldn't hesitate to recommend them (oh, and recommend buying the book too!).
Thanks to EvidenceMatters for excellent choices for this week, which again, I probably wouldn't have made on my own. 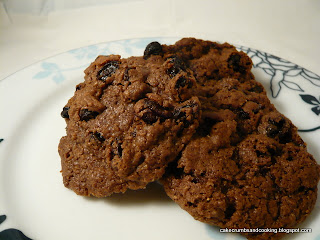 The ginger cookies look good. The rye and raisin look maybe a bit too healthy!

That's what I thought, but they honestly don't taste healthy or worthy. They're sweet and deliciously chewy!

The rye and raisin could almost be passed off as chocolate couldn't they ... I never said that ;0)

Chele - they are chocolate! The dough contains cocoa powder!!!

I've made the spelt and ginger cookies before - they are good aren't they?

They look very rustic! In a good way, of course.

These look great. I love the crispy yet chewy texture you've got. The rye ones sound very wholesome and tasty

I have Dan's book but would NEVER have made the rye and raisin cookies - but now I will!

I'm tickled that so many people's reaction to this recipe (like mine) was, "Hm, interesting but I would never have made them".

I added cardamom to both recipes and don't regret it. I don't keep back any of the spelt and ginger cookies (an omission) but I can report that after the rye and raisin cookies mature for 2 days, they have a delightful, fruity flavour and the sweetness is no longer overwhelming to those of us who don't have a sweet tooth.

My ginger and spelt cookies had become 'just chewy' after a few days too. I think they kept the crispness for at least 2 days but after that pretty chewy, but still very tasty.

I'm a big fan of spelt so am going to give these a go. The look great.

Suelle - yes, those ginger and spelt ones are truly delicious, but the rye and raisin are great too!

Janice - yes, they're pretty dollop-y as cookies go, especially the raisin ones, because it's impossible to roll them!

Katie - they were definitely best just baked, when there was crispness as well as chewiness. The rye and raisin ones tasted lovely, and not healthy at all!

Claire - they're definitely worth the time!

EM - good to know the rye and raisin mature well. I bet cardamom was a great addition, wish I'd thought of that :-)

MissCakeBaker - I bet you'll love them :-)

This is a really informative post C and both of your cookies look utterly delicious. I'd have had a hard time choosing which one to try if you offered them both. I hadn't realised there was any chocolate involved in last week's #shortandtweet or I would have made the rye and raisin ones. I always have problems with biscuits going soft quite quickly, but usually find they crisp up quickly if put back in the oven for a couple of minutes.