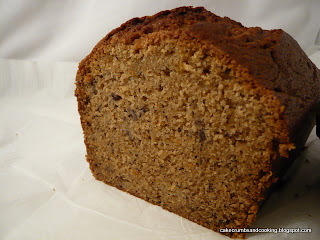 And following on from the spectacular fail that was my attempt at Chelsea Buns, we'll move onto something altogether more successful.
I spotted this recipe a while back in the February 2012 issue of BBC Olive magazine in a feature on cooking with oranges and lemons, and really fancied making it as an alternative to the other banana bread recipes I've tried in the past. The recipe can be found here, and I made a few small changes to it. I somehow thought that I had run out of light muscovado sugar, with only about 80g left in the packet. I was sure I had some more, somewhere, but in the disorganisation of my kitchen I couldn't find it and so decided to substitute the remaining amount of sugar with equal quantities of dark muscovado and normal caster sugar (so that the treacly dark muscovado didn't take over the flavour of the cake). This worked fine, and added a treacly depth of flavour to the finished cake. I found the other packet of light muscovado sugar as soon as the cake was in the oven.... 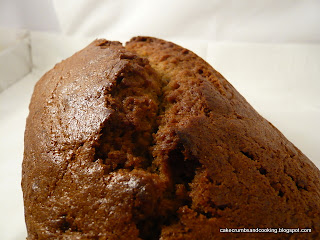 I didn't bother with the candied orange to sit atop the cake - I'm not all that bothered by decoration of that sort and worry that the decoration will sink into the cake. I wanted a success, not a failure! Besides, I love a loaf cake with a beautiful crack down the centre. Instead of using cardamom pods and crushing the seeds, I used a scant 1/4 tsp of ground cardamom, only had two ripe bananas rather than the specified three, and missed out the walnuts altogether. Hmm, perhaps these weren't only minor changes! Never mind, they didn't affect the outcome of the adventure, and the resulting cake was excellent. 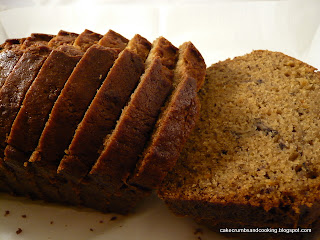 I really liked the combination of flavours - the orange, cardamom and the dark sugar all blended together really successfully. The cake wasn't too moist or heavy, as can sometimes be the case with banana loaves (possibly because I didn't put as much banana in it!) but it was still lovely and moist and a great cake to take to work, being perfect for a break with tea. It rose well, and was quite tender - the slices were apt to break if handled too roughly, but since the cake didn't last long, this wasn't a problem! Might try adding a bit of chocolate next time. I think chocolate and cardamom are supposed to be a good flavour combo....
Posted by Caroline at 18:25

Looks lovely. I really dont use cardomom enough, its such a unique delicious flavour.

god, what an amazing combination of flavours... I too love a loaf cake, so simple yet SOOOOO satisfying!... divine x

Those flavours together sound delicious and the loaf looks fab too!

I love cardamon but have never used it in baking. This bread sounds wonderful!

Thanks C! I've just discovered loaf tin liners, so now am trying to get my hands on as many loaf cake recipes as I can. This one sounds like a winner! :)

This looks great! Lovely flavour combination and such a lovely bake. Definitely a success :)