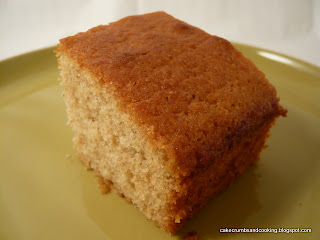 This is another of the type of cakes I regard as everyday 'snacking' type cakes. The ones that you keep in the cake tin to grab a piece of as you pass by. Not a posh dessert, but something simpler, just to keep you going. But this cake was no less delicious for that.
I would almost call it frugal - it felt that way to me because I was using up lots of bits of ingredients that I had lying around the place, as you will be able to tell from the ingredients list! However, I don't think it was a particularly cheap cake to make - it still contains butter and eggs and the spelt flour isn't exactly a routine ingredient for many people. Frugal in spirit I think (and the pictures are certainly frugal - please excuse them!). 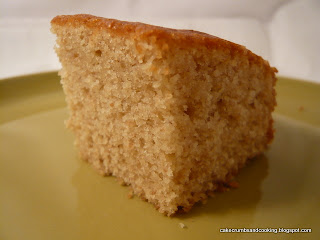 The spelt flour was a new product that I had seen in the supermarket and wanted to try. I have enjoyed cakes and breads made with spelt flour in the past and wondered what the Dove's Farm flour would be like. Although I have only used it for this cake, I'm pleased with it. One of the brands I have bought in the past is full of bits of husk, which pretty much necessitates sieving it, and then picking through the bran to get the husks out and then adding the bran back in so as not to lose the weight of flour, or the nutritional benefits of that part of the flour. It's a pain! But the Dove's Farm flour doesn't seem to have husks in as far as I can tell. 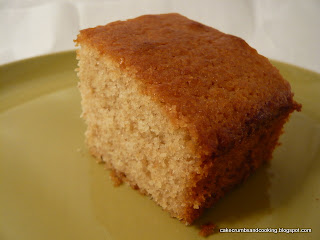 
* I used a runny honey, but it had crystallised and wouldn't squeeze out of the squeezy nozzle (I'm going to stop buying squeezy honey - I never get it all out before it crystallises), so I chopped the top off the bottle, spooned it into a pan and melted it very gently over a low heat, just to get rid of the crystals.
Method
- Preheat the oven to Gas 4/180C. Grease and line an 8"/20cm square tin. Mine was a shallow rather than deep tin.
- Cream the butter and sugar until slightly lighter in colour.
- Add the flours, baking powder, honey (which was warmish), eggs and buttermilk and continue to beat until well combined.
- Spoon into the prepared tin and level. Bake for 40-50 minutes (ish, I can't quite remember!) until well risen and golden and springy to the touch.
- Allow to cool on a wire rack. 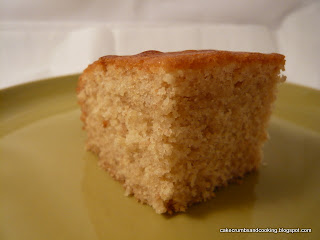 As I said above, I hadn't intended this to be a decorated cake, and was more interested in the flavour that the honey and spelt flour gave the cake. To this end I should really have used a more interestingly flavoured honey! It was  a lovely, moist tasty cake. There was a slightly wholemeal flavour, which was good, and the honey was discernable but subtle. I  think I'd definitely make this again, but would use a better honey to get a more obvious flavour. I think mine was just a fairly generic runny honey.
Nice cake, went down well at work!
Posted by Caroline at 18:55

Great timing, C! I've just bought a 10kg bag of wholemeal spelt! This cake looks very wholesome - I reckon I'd love a slice with a cup of tea!

Snackable cakes? Brilliant! That is a concept I'm most definitely adopting for the New Year! I've seen a few recipes recently containing spelt flour and was going to try and pick up a bag next time I'm out and about - this recipe will come in very useful, thanks C!

Looks good C. I am imagining it with custard, Mmmmmmmm :P

You should add it to this month's Frugal Food Fridays. I have a linky at the bottom of my current post.

Definitely a January vibe cake. I know what you mean about the squeezy honey, but he jar stuff is just the same.

I just bought a bag of spelt flour for another recipe but I'm definitely making this too as I love honey and snacking :)

I like the sound of this. I've just bought some spelt flour too, although I forget what for, at the moment.

I have the same problem with honey, and stopped buying the squeezy bottles after trying to microwave one to remelt the honey! At least the last crystallised bits are easier to get out of a jar!

This is my perfect cake - love honey in any cake

I still have some splet flour hanging about from my 'spelt baking' phase! Will need to give this recipe a try, it looks delicious.

Your photographs are great - they certainly make me want to tuck into a slice. There is something about the words honey cake that has be craving a slice. The crumb looks really good on this. I made some honey cakes recently and oh isn't honey expensive?

Glad to see so many people now experimenting with spelt flour - may all time favourite flour to bake cakes with. That way I can eat my cake and feel it's doing me good!!!

Celia - you definitely beat me - I only bought 1kg! Would love to know how you're going to use all yours. A slice with a cup of tea would be perfect!

Kate - I quite like spelt flour from the times I've used it. And snackable cakes are the way to go!

Jac - I guess it would be good with custard (what isn't!), I hadn't thought of that. I don't think it is a frugal cake really - it probably cost as much as any of my others to make, I think it was a frame of mind induced by using bits of things up!

Janice - yes, but at least with honey jars the crystallised stuff can still be got out with a spoon!

Baking Addict - you'll love this cake then! Look forward to seeing what else you make with the spelt flour.

Suelle - I'm sure it was for something interesting! Yes, I'm going to stop getting honey in squeezy bottles for exactly those reasons!

CC - honey in cakes is lovely isn't it - smells gorgeous baking and tastes good too. I ought to have used more interesting honey though!

Chele - it's a good use for spare flour!

Choclette - Thank you! It was a lovely crumb - very soft and tender. Yes, honey is very expensive, I just hope that it carries on being available at all, with all the worries about bees and disease.
Yes, spelt flour does seem to be getting more popular, I'm surprised at the number of people commenting here who have said they've got some to use! I started using it a while ago, but don't use nearly as much wholemeal flour in baking as you do. I do find that a 50/50 mix of wholemeal and white gives a better texture and so forth than 100% wholemeal.

Mmmmm...this looks like an awesome snack. Cake is my weakness!

Sunshine - thanks for commenting! Cake is always a good snack!

I've been very impressed with everything I've made with spelt and this sounds divine. Exactly the kind of texture I like in a cake!

Hello again. I made this last week and it was delicious!! I've just posted on my blog with a link back to yours. thanks again!

i have never baked with spelt before so was a bit nervous...turned out amazing though. could barely tell the difference. thanks for this awesome recipe...