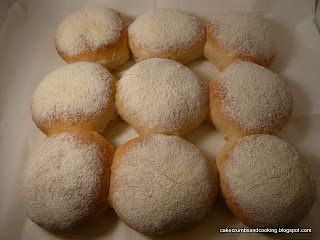 These were one of the choices for this week's Short and Tweet challenge (organised by @EvidenceMatters, you can find the blog here) baking from Dan Lepard's book Short and Sweet. The other choices were Superwraps and Cider Vinegar Muffins, both of which I also want to make, but ran out of time (and freezer space for storage!).
I have made these before from the recipe published on the Guardian website here, and you can see what I thought of them then here.
Some more thoughts on the dough and the process this time. I used my danish dough whisk to mix the sponge ingredients and rather lazily left it in the dough so I could use it to mix in the remaining ingredients. It amused me greatly to see it gradually disappear until only the imprint of the whisk was left as the sponge rose! 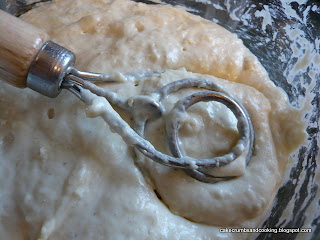 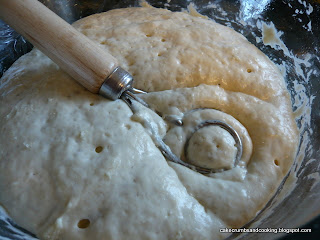 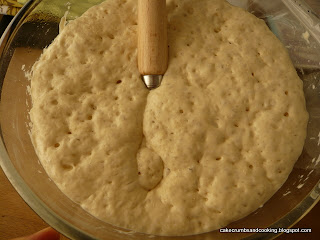 Gone!!!
I followed the recipe ingredients fairly closely, but my timings were all over the place. I left the sponge for far longer than it should have had (closer to 5 hours!), the intervals for mixing the dough were rather stretched, but the final proove of the buns was much shorter - they just seemed to grow quickly and although I was aiming for the batched effect I didn't want them to become one ginormous bun! 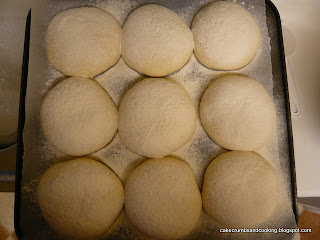 Just before baking, dusted with lots of flour
I found that the dough was incredibly sticky to work with - I really needed my dough scraper to have  a hope of kneading it that first time, but after the first time the dough was much better behaved and less sticky, but still very soft and floppy. Looking back at the notes I made last time, I also found this to be the case then. 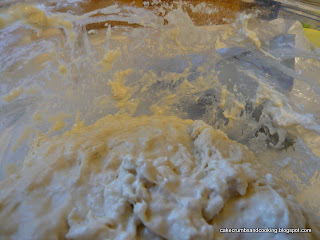 Sticky bowl - very soft dough
The changes I made to the ingredients are that I halved them - I made nine buns out of my half, each ball of dough weighing around 85g, which will be a good lunch size - the original nine would be massive and I'd need to snooze after lunch, which I'm not entirely sure would go down well with my colleagues! I used 30g butter rather than 37g, and reckoned on a tbsp of cornflour being 15g (this is probably incorrect, but I used the weights rather than measuring). I also cut the sugar and used 15g rather than 25g. 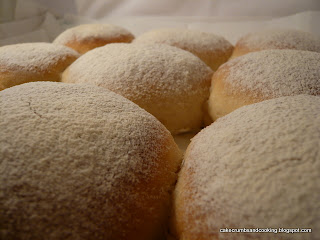 I baked at 200C/Gas 6 for 20 minutes, after dusting the buns heavily with flour to protect the tops from burning. When I'm having soft white bread I don't really like a dark crust. These tactics worked well and I have ended up with beautifully soft white bread with a close crumb, delicious for sandwiches. 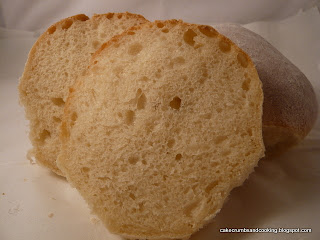 Since I'm a little late getting this post up I will have to add further notes about taste and texture when I've actually had a chance to eat them, but they do feel just as soft as I remember them - i.e. the softest buns I've ever made! I think it might be interesting to try this recipe as half wholemeal or half spelt and see if the cornflour has the same softening effect when combined with a partly wholemeal flour - healthier too!
Update 16/01: Well, these are delicious and my lunch today was very enjoyable. A truly soft squashy bun, but springy too, in the sense that once you've squashed them they don't disintegrate to a disgusting dough texture (supermarket buns I'm looking at you) but spring back to be soft and squashy again. Win! These would be perfect rolls for a child's lunchbox if you have a fussy wholemeal hating child who wants shop bought bread and to be identical to their friends. The only difference is that these taste homemade - i.e. delicious. They are unashamedly a white yeasted roll though - there is none of the complexity of flavour that you get from the incorporation of other flours or any seeds or using sourdough rather than yeast and so forth, but they certainly deliver what they promise. They'll certainly be welcome in my lunchbox this week. 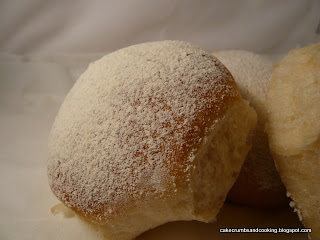 Well, with a dough that wet at least you know you are going to get a fluffy bread! Looks more frustrating to work with than I am prepared for though.

Absolutely gorgeous baps. Look forward to hearing your thoughts on flavour. I think these are reallymdelicious. We've already eaten ours so I'll make another batch this week. :)

Another Dan Lepard recipe comes up trumps! These look so soft and delicious - think I have to face my "bread baking fear", roll up my sleeves and just do it!

Anna - I've updated the post now with tasting notes. I ought to be more organised but this needed to be posted to meet the deadline and I didn't get a chance to eat them!

Foodycat - It was a little wet, but it wasn't that much hassle to work - a liberal coating of olive oil on the work surface and it was fine. And the second and third kneadings were much less sticky. Only one sticky step to overcome!

Maria - thank you! I was pretty pleased with how they came out.

Bella - thanks for stopping by.

Misk - they're great aren't they. I've updated and added tasting notes too. Yes, I can imagine these going quickly!

Claire - give one of Dan's recipes a go, yeast isn't that bad. It took me a while to get the hang of it, but so worth it. And Dan's recipes are a great place to start :-)

Victoria - you can easily participate in Short and Tweet - check out the links to the blog I've given, or if you're on twitter you can participate that way too.

They look perfect! The dough does look a bit tricky to work with though, without a dough scraper would it be a bit of a nightmare/

Haven't they worked out brilliantly. Love it when a plan comes together ;0)

C, they look perfect. Dredging them with lots of flour seems to have done the trick. I agree, you don't want a burnt crust on soft white buns. These sticky doughs are quite hard to work with. I made Dan's muffins for the challenge but used about 1/2 wholemeal flour. They still turned out perfectly soft inside and rose amazingly well.

These buns are well-risen! And, they look very soft and yummy.

Your blog is fantastic and I would love to follow you for more of your delicious baking.

Chele - so do I, and this was a plan that most certainly worked!

Choclette - your muffins looked great. I'm enjoying seeing what other people make for the challenges.

Zoe - they are indeed soft and delicious, and the more I eat them, the more they grow on me! I'd love you to follow the blog for more recipes, I'm glad you like it!

Brydie - thank you! They're soft tasting too :-)

Johanna - thank you! They are indeed very soft, I think you'd like them, I guess they're a little like the buttermilk bread? I'm going to make them again soon!