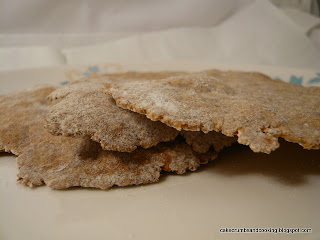 A rather puritan start to 2012 you may think. This week I have chosen to make Dan Lepard's extra-thin rye crispbreads from Short and Sweet for the Short and Tweet challenge hosted by Evidence Matters (@EvidenceMatters). I made them as a pre dinner nibble for New Year's Eve and when I mentioned to my dining companion, J, that I had made rye crispbreads she seemed rather underwhelmed. "What, like Ryvita?" Well, no, not really like ryvita at all as it happens! 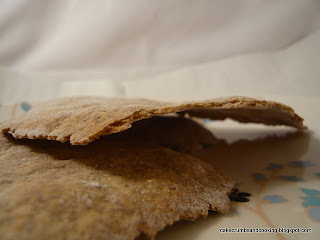 They are made from wholemeal rye flour but with a dab of butter, a little salt and sugar and rolled paper thin with the aid of plenty more flour (I used normal plain white flour to roll with) but they bear no resemblance either in taste or texture to the cardboard known as Ryvita. 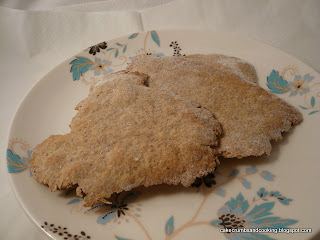 I didn't find the dough difficult to work with at all, and made them whilst making the rest of our NYE dinner, not too much brainpower or effort required for a very tasty result. I would recommend being pretty generous with the flour for rolling out though, as otherwise the dough tended to stick. One of my favourite parts of this recipe was the instruction to leave the edges ragged - I'm rubbish at rolling out proper shapes and so this made it so much easier! 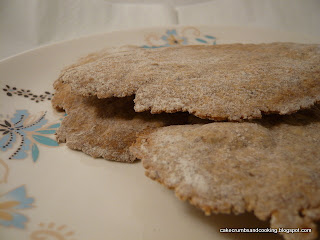 All was well though, since after tasting, J described her thoughts on them thusly.... "Well, if Ryvita is like eating cardboard, these are like a very fine writing paper..... though obviously I wouldn't eat writing paper either..." Funny thing is though, I know what she meant. And if you make these I think you'll know too. Irresistably moreish, we had them before dinner with a little unsalted butter (how pretentious does that sound?!) but then for breakfast the next day they were enjoyed smeared with homemade lemon curd. A great start to the new year! Thanks to Evidence Matters for picking these, I would never have tried them otherwise!
Posted by Caroline at 19:25

I'm so pleased because I do try to pick recipes that might catch people's attention but that they wouldn't necessarily make.

We enjoyed these - so far with cheese, honey or bacon relish.

I'm looking forward to writing up everyone's attempts at this recipe.

That is a great idea for nibbles. And they look like they have worked a treat too. So pleased Santa managed to fit this book on his sleigh for me ;0)

Oh bet they would be good with cheese too.

The thing is, I love ryvita! I want to try these too though.

I'd happily eat your fine writing paper any day C! :-)
...especially with some lemon curd slapped on there.

They're so good! I love them too. The dough really wasn't difficult to handle was it compared to other things made with rye.

Home made lemon curd too? Oh yum I would have loved to try that... reading your post makes me want to make another batch right now. :)

I had to make two batches before I got it right. The first time they were too thick. The second try was perfection, and I did sieve the bits out of the wholegrain rye flour the second time round. Not sure if that made any difference but I suspect that it did. :)

They look good. I made the ones from the nordic book in the summer. I rolled and then cut them, which worked well for the shapes!