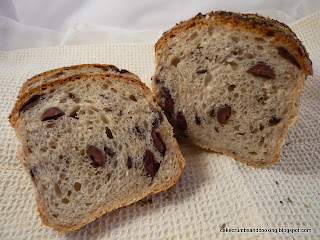 A couple of sweet things followed by a savoury. I do try and mix it up a bit so that those of you who aren't so interested in the cakes don't lose interest entirely, and those who don't want to see just bread aren't bombarded by yeasted entities. Me, I love them both.... hence why they all feature here! Do you prefer posts about bread, or do cakes rock your world more? 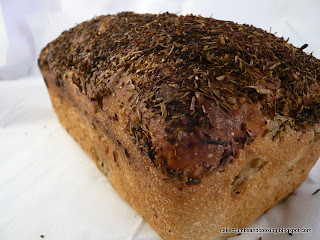 I found sumac in the supermarket a few months ago, and bought it. I'm pretty sure I'd seen a couple of recipes calling for it, and even though I couldn't remember where they were I knew I'd find them again at some point. I still haven't. And after I'd bought my rather expensive sumac, it started appearing everywhere in my sights, most notably at a much more reasonable price in the local vegetarian co-op. Sigh!!! Anyway, I was intruiged by my purchase and immediately opened it up to have a sniff, it smells utterly lovely, sort of citrussy but not. That's not a great desciption I grant you, but then I'm not great at describing things! So I couldn't wait to use it. Luckily for me, Dan Lepard published a recipe for black olive sesame loaf, requiring sumac! 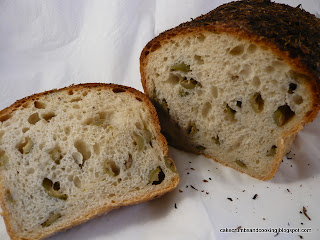 The first time I made it I followed the recipe (which can be found here on the Guardian website) very closely (aside from halving it, ongoing storage problems), with kalamata olives and sesame seeds. You can see the result in the top picture. Very successful. However, I'm not entirely sure about sesame seeds and so the loaf languished and I thought I'd better make it again without the sesame.... I only had green olives available this time round, and again intended to make a half recipe. I carefully measured out half of the olives, yeast, sugar and proceeded to add the warm water. I added half the flour and looked at the resulting slop and wondered whether it had been this wet last time. I guess you're a step ahead of me and I realised the full amount of water would obviously require the full amount of flour.... I added more olives once I'd realised my watery error. Aside from that, the baking went to plan and produced a lovely light loaf. 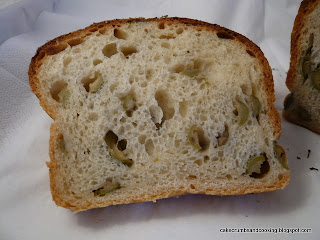 It's defnitely one for the olive lovers (that'd be me then) you can see just how many olives are in each mouthful. It's a great partner for my cheese sandwiches (sometimes it's good to be satisfied with the same filling - I can't quite see this bread working so well with say, egg mayonnaise or salmon, but thinking about it, I bet it'd be great if you like ham (I don't) or cured meats (ditto) or maybe even tuna.... I need to branch out a bit) and I love the salty olives. Mmmm, salty (in the style of Homer Simpson). Having said this, I was disappointed with the topping. Because the loaf is baked at a high temperature (although I didn't bake mine as hot as specified, choosing to give it longer at a lower temperature instead) the topping seems to catch a little, and although I'm now used to the flavour of the topping on the loaf I actually think it would probably be better without. Sorry Dan! I also can't really distinguish any flavour added by the sumac or lemon, it just tastes of thyme and oregano to me. Anyway you live and learn and to end on a positive note, this is a great loaf for olive lovers and a little out of the ordinary. 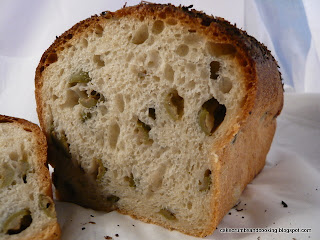 Mmm I love olive bread but hate making my own bread! That does look really delicious so I may have to change my mind.

This looks fabulous. My dad adores olive bread so I'l have to show this to him. Wonder if I could adapt it to being GF?

That is a great looking loaf of bread and uses flavours I probably wouldn't try at home myself. I love both bread and cakes so I guess I have a foot in both camps lol

Oh wow - that crumb is absolutely the perfect texture! Gorgeous.

I am more into savoury than sweet for eating, but you make such pretty sweet things I am happy to read about them too.

I adore olive bread and this looks a corker!

Bread and cake, bread and cake...is there ever really any need for anything else?
Loaves look mighty fine.

Bakingteacher - give it a go. Dan's method for making bread is very easy, and very hands off!

Katie - I'm sure you're skilled enough to adapt this!

Chele - thanks! A foot in both camps sounds good to me!

Celia - thank you, that means a lot coming from you!

Foodycat - thank you! Glad to hear you don't mind reading about the sweet stuff even if it isn't your cup of tea.

Brydie - thank you! Bread and cake is definitely all I want...veggies.... what are they?!