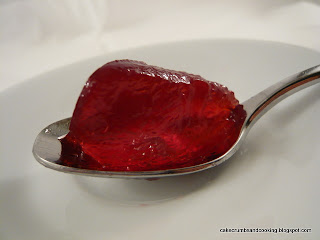 I originally wrote this post last October but then never got round to inserting the pictures, recipe, finishing it off and posting it. However, I hope you'll forgive me, because now seems a pretty good time to post it, since redcurrants are actually in season and you'll be able to use fresh ones, preferably from the pick-your-own rather than the frozen ones I used to create some freezer space. I would have pretended that it was jelly from this year, but most of the pictures feature jars labelled 'October 2010' so I think you would have guessed....... so here is the post I wrote last October, modified only slightly!
Regular readers of this blog will know that I seem to have a perpetual freezer problem - there's never any space in there at all. In fact I would go so far to say that my freezer is like a reverse tardis - the freezer looks big enough on the outside but actually seems to hold very little. So, fed up of trying to shoehorn more stuff into it, I decided to have a go at actually using some of the things in there. When redcurrants were in season during the summer I stashed quite a few of them in the freezer with no particular plans in mind - summer fruit pudding perhaps. But months pass and summer fruit pudding no longer seems desirable. So I hunted through and found I had quite a few. 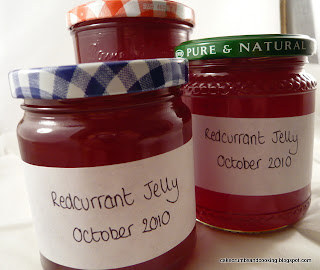 Now for my birthday (some months ago) my darling brother T was kind enough to give me two of the River Cottage Handbooks (he probably won't remember this as I actually bought them ;-)), one of which was No. 2 Preserves by Pam Corbin. I only looked in it recently and am sorry I didn't do so sooner as it's stuffed full of delicious things that I really, really want to make. I've made my own jam for a number of years and enjoy it, and J used to make redcurrant jelly when I still lived at home, so I wasn't too daunted by the prospect of a jelly bag and all the associated sterilising jars palaver that goes with preserving. Hmmm, perhaps I should have thought harder about it before I started.
I went to buy my jelly bag and stand, but discovered that the stands were really expensive, so I thought I'd save myself some money by just getting the replacement jelly bag that was sold separately. Having followed the recipe through to the stage of soft fruit hot in the pan ready to be dripped through the jelly bag I realised the error of my ways. How was I going to hold the jelly bag (complete with clever elasticated neck for holding it securely onto the jelly drip frame) open to add my (very hot) fruit and then stand and hold it while it dripped. Hmmm. So don't follow my example - if you want to make jelly, fork out for the stand too! In the end I had a bit of an elaborate palaver involving various contortionist positions to reach hot fruit on the stovetop whilst holding a bag of dripping hot fruit and pouring aforementioned hot fruit with only one hand from a large pan..... I'm sure you get the picture. Luckily I'm not all that bothered about a crystal clear jelly (which is why you let it drip through under its own weight rather than squeezing) so I cut short the dripping stage by squeezing the bag (did I already mention how hot that fruit was - I really don't recommend this stage!) - I think this also increased the yield. There are no photos of the in-process stages, for reasons outlined above - I could already have done with spare hands; there was no way a camera was being involved too. 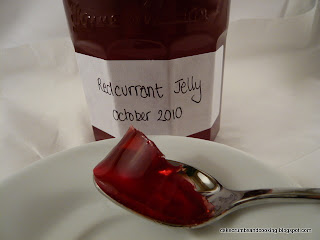 July 2011 insertion: As you can imagine I can no longer remember exactly how closely I followed the recipe, but think I was pretty close so I'll give the recipe here:
Redcurrant Jelly
Makes 4-5 x 225g jars
1kg redcurrants
granulated sugar
You will also need sterilised jars.
-The redcurrants do not need to be top and tailed or even taken off their stalks. Simply wash them, put into a preserving pan with 400ml water then simmer until they are very soft and have released all their juice, approximately 45 minutes.
-Strain through a jelly bag - see discussion above!!! Overnight will give a clear jelly, forcing the fruit through the bag will result in a cloudy jelly.
-Measure the juice, put into a cleaned preserving pan and bring to the boil. For every 600ml juice, add 450g sugar, adding it only when the juice is boiling. Stir until the sugar has dissolved, ensuring the sides of the pan are free of undissolved sugar crystals. Boil rapidly for about 8 minutes or until setting point is reached. I can't remember how long my setting point took, but I used the wrinkle test to tell when I had a set - small plate in the freezer, jelly onto plate, push with finger and see if it forms wrinkles, if it does, it will set.
-Remove from the heat, stir to disperse any scum, then pour into warm, sterilised jars and seal. Tap the jars to disperse any air bubbles caught in the jelly.
Use within 12 months. 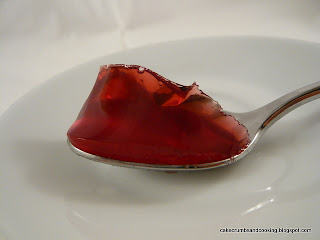 In spite of all the problems I had with straining the jelly, I really enjoyed making the jelly and if you reuse jam jars with tamper proof seals hearing the little pop as they pop down must be one of the most satisfying noises I can think of in the kitchen! 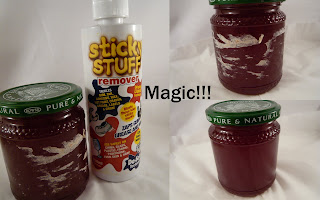 Note to self - when reusing jam jars (or honey jars in my case) it's worth trying to get the label off before you sterilise them. The smell of baking label/glue is really unpleasant. However you can use magic sticky stuff remover to get rid of the label. (Available from Lakeland) I wish I'd invented this because it truly is amazing. Remove as much of the paper part of the label as you can and then use the magic sticky stuff remover to .... well, remove the sticky stuff. Bingo, clean tidy jar ready for labelling up!
Posted by Caroline at 09:30

I did laugh when you describe your lack of freezer space - mine is always full and I can't honestly account for what's in there!

Your jelly looks lovely and has great clarity

a) that jelly is absolutely perfect! I bow down in awe at that set & clarity. b) Why didn't I know about sticky stuff remover?! It would have stopped the tears of frustration I experienced trying to get a label off a jar last weekend.

C, your jelly looks perfectly set! It can be so hard to make it work, what a great job you've done!

Isn't Pam's book wonderful? We've made so many things from there. And we cheat - we just use a colander lined with a cloth napkin and drain the liquid through that - we've never owned a proper jelly bag! :)

I've never played with red currants before...actually I'm not even sure I've eaten them a whole lot. This jelly looks lovely, beautiful shade of red.
The labels thing was driving me crazy. I'm now just putting my own string and paper label tied on so I don't have to do any more scrubbing than is absolutely necessary!

Lol - I feel so much better now! I have a post for Rhubarb and Strawberry compote from about 2 months ago I never posted and I decided to wait till next year now when everything is back in season again. Lovely looking jelly, love how the light shines on it, very pretty.

CC - I'm glad you laughed! Guess what though... that jelly got rid of last year's redcurrants, and now I've got this year's in there. Still have some redcurrant jelly left though...

Foodycat - a) thank you! I guess it's pretty impressive given the amount of squeezing I did when you're supposed to let the stuff drip through without even stirring gently b) that sticky stuff remover is absolute magic. Worth a trip to Lakeland for alone!

Celia - I must just have been lucky to get the set! It's a lovely book, and getting it out again to write up the recipe has re-inspired me to want to make lots of things in it all over again. Love the idea of a colander and muslin. Now why didn't I think of that...

CHFG - thanks. Yes, labels can be a complete pain. I bet your tied on ones look beautiful though - very crafty and artistic! Mine are much more mundane!

Chele - thanks! I've got other ancient stuff back in the unpublished archives too - Christmas cake anyone???

Your jelly looks superb. So tempting. What is it about jelly and jam that make them so appealing? Must be because they are such pretty colours.

Wish I had seen your post before I put my order in with Lakeland. I would have bought some of that sticky stuff. What a great product.