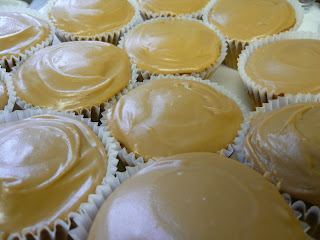 Glossy shiny icing for simple cupcakes. I decided that I wanted something slightly more interesting than just plain vanilla buttercream for these vanilla cupcakes and found the perfect icing on the Caked Crusader's blog - there should be more people fighting for the cause of cake in this world, and the Caked Crusader is doing a fabulous job - I always want to make the cakes she talks about, and this was no exception. Since I appear to be in cupcake mode at the moment (easier for people to pick up rather than a slice of a larger cake) I decided to go for plain vanilla cupcakes. Plain perhaps, but delicious nevertheless (put that down to the use of real butter in the cake mixture, plus decent vanilla extract). Since the star of the show here is the icing, I'm not going to give a recipe for the cake - it's just normal sponge cake mixture, but if you want a recipe, follow this one for coffee walnut cupcakes, but omit the coffee and walnuts, replacing with 1tsp vanilla extract. 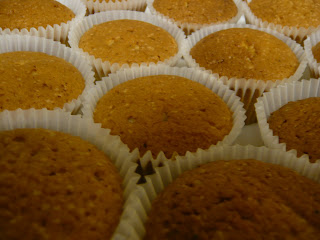 Ok, so you have your naked cupcakes ready to be iced - see picture above - it's nice to leave a bit of depth for the icing to pool in - because it's not stiff it won't gain great height, so to have a good depth you need to allow a little room! I guess it's time for the icing recipe.
Caramel fudge icing
-60g unsalted butter
-110g brown sugar
-2 tablespoons milk or cream, more may be required
-80g icing sugar

Method
-Melt the butter in a saucepan and add the brown sugar and milk/cream.
-Bring to the boil then reduce the heat at once. Simmer for 2 minutes then remove from the hob.
-Allow to cool slightly before sifting in the icing sugar. Sifting the icing sugar is vital – if you don’t the icing sugar will form lumps in the icing which no beating will remove (as I learnt to my cost and had to remake it!)
-If the icing becomes too thick simply beat in an additional tablespoon of milk.
I have copied the Caked Crusader's instructions word for word, but because I'm lazy I didn't bother sifting the icing sugar. The CC is right, it does form lumps, but my icing sugar was fairly non-lumpy and I was able to beat really, really hard and the lumps did go (eventually). I think sifting the icing sugar would be quite a labour saving step overall. Go with what the CC did! 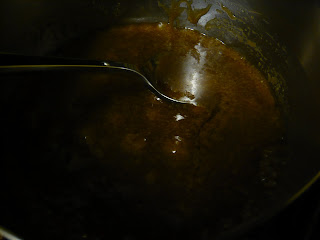 The butter, sugar and cream melting together in the pan - you can just see the bubbles if you look closely. When you add the icing sugar it makes the whole thing much paler. 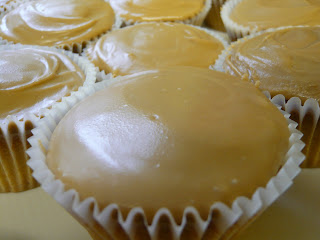 Although they look fairly plain these were well received and attracted plenty of compliments about the butterscotchy, fudgy icing. Well worth a try!
Posted by Caroline at 22:02