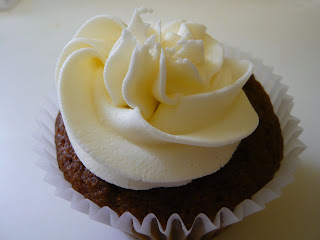 I love carrot cake, but it's something I tend to have to make for myself, as bought carrot cakes tend to have out-of-bounds nuts (particularly walnuts) in them. I therefore didn't know that I liked carrot cake until I first decided to make it. I originally used Delia Smith's Low Fat Carrot Cake, not for being low fat per se, but because one of the ways in which she makes it low fat is to miss out the nuts. Result! It is a gorgeous, squidgy, moist cake, and with the inclusion of carrots, raisins, wholemeal flour and sunflower oil rather than butter, could almost be said to be good for you. Well, as far as cake can possibly be good for you. And if you're wanting to make Delia's version and are worried about the topping, don't be, it's divine and really complements the cake perfectly. I tried eating the Quark on it's own once, yuk! That bit of icing sugar and the spice transform the topping into a perfect frosting to complement the carrot cake.
Anyway, this post isn't actually about Delia's carrot cake, I just got carried away with the memory of eating it.....mmmmm. I wanted to make individual carrot cakes to take into work and because they wouldn't be refrigerated, decided to opt for buttercream rather than cream cheese topping as the former is ok out of the fridge. I thought Delia's recipe might be a little too moist for this purpose though and decided to try this one, from BBC Good Food magazine a number of years ago. It's very easy to make (especially if you're lazy like me and don't bother with the orange zest - in fairness I didn't have any oranges in) but is not a particularly attractive batter as you'll see later. I scaled the recipe to 2/3 of the original and made a couple of other minor modifications as you'll see.
Low fat moist carrot cake
Ingredients
115g light muscovado sugar
115ml sunflower oil
2 large eggs, lightly beaten
66g raisins
115g self-raising flour
scant tsp bicarbonate of soda
2 tsp mixed spice
For the buttercream frosting
100g very soft butter
200g icing sugar, sifted
1tsp vanilla extract
Method
-Preheat the oven to 180C/Gas 4. Line a 12 hole muffin tin with 9-10 paper cases
-Put the sugar and oil in a large mixing bowl and mix with a wooden spoon. Stir in the grated carrots and raisins.
-Mix the flour, bicarbonate of soda and spice, then sift into the liquid mixture, mixing to combine. The mixture will be fairly runny.
-Tricky bit now - attempt to pour/spoon mixture into the cases any way you can without spilling too much. I think I used a large metal spoon. Place in the oven and bake for around 30 minutes, although check around 25. They are ready when the feel firm to touch and a cake tester comes out clean.
-Remove to a wire rack to cool while you make the buttercream.
-Beat butter and icing sugar together, add vanilla extract and continue beating until very light and fluffy.
-Frost your cupcakes when cool.
-Enjoy!!! 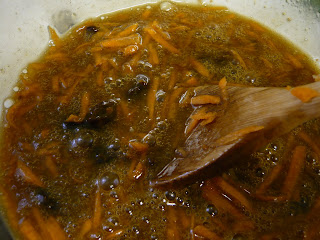 The egg/sugar/raisin/carrot mixture - not a pretty picture and you can't imagine that such a lovely cake could possibly come out of it! 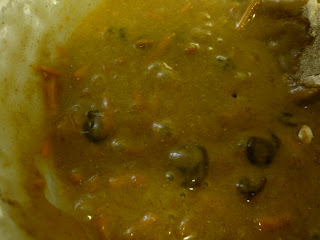 Doesn't look much better when the flour and spices have been added, very runny and yuk! 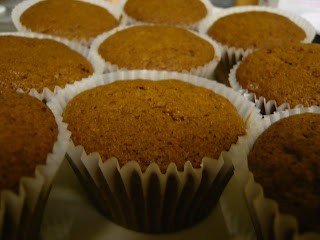 But magically, all will come right and you will have glorious cupcakes. I made 9 out of this amount of mixture, but you could probably get 10, they were quite large. The mixture does rise quite a lot during baking - I think I only filled them about 2/3 of the way. 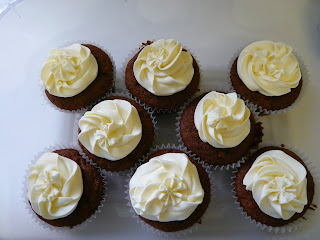 Frosted cupcakes ready to be transported to work. I probably didn't use as much buttercream as I've specified in the recipe, as I made it for both these and the coffee walnut cupcakes at the same time and didn't want to use too much. I think they could have done with a little more icing, but they were very well received at work - they are moist and delicious.
Posted by Caroline at 09:28