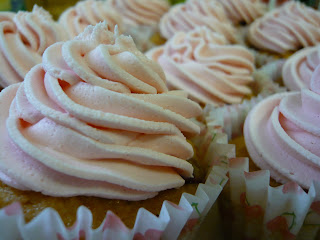 My buttercream piping skills are getting better! A batch of simple vanilla cupcakes with a little twist - marbled with a little swirl of raspberry jam. I have a slight confession to make - I forgot to add any vanilla extract to the actual cupcake mixture, but as I used butter and organic eggs in the mix, they tasted good anyway! I decided to colour my buttercream pink just for the sake of it really, to complement the cupcakes and continue the pink/red theme. It also covered up the very very slight brownish hue of the buttercream due to the added vanilla extract in it. Although I'm sure no-one would have noticed anyway. I found some pretty cupcake cases in Julian Graves and I also have to admit to buying disposable plastic piping bags from Lakeland limited. So so much easier than washing, drying and reusing the cloth type one that came with my piping nozzles, or attempting to use plastic food bags, as I did for the chocolate suprise cupcakes. (This is a big mistake - plastic food bags, even one inside each other, are not strong enough to hold the nozzle in place and I ended up with buttercream oozing all over the place as the plastic stretched and allowed the buttercream to escape.....) The disposable piping bags are great - you just chop the end off to allow the nozzle to poke out, fill the bag and away you go, piping with no fear that the buttercream will develop an adventurous mind of its own. So onto the recipe:

Raspberry swirl cupcakes
Ingredients
120g butter, softened
120g caster sugar
120g self raising flour
2 large eggs
4tsp raspberry jam (you can use seedless if you want, but I didn't)
For the buttercream icing
100g butter (very soft indeed)
225g icing sugar
1tsp vanilla extract
approximately 1/2 tsp red food colouring (optional, and to the colour you require - if you use paste colours you'll need a lot less!!!)
Method
-Preheat oven to 180C/Gas 4. Line a muffin tin with 12 papers
-Cream butter and sugar until light and fluffy.
-Add eggs one at a time, beating well and adding a little flour if necessary to stop the mixture curdling. Add the vanilla extract.
-Add the remaining flour, fold in and spoon into the muffin cases.
-Blob a little jam onto the top of each cake mixture and swirl with a cocktail stick.
-Bake for 20-25 minutes until light golden brown and a cocktail stick inserted comes out clean.
-Remove to a wire rack and allow to cool.
-For the buttercream, start by mixing the (very very soft) butter with the icing sugar using a fork (if you use the electric mixer at this stage you will end up inhaling icing sugar - nice!!!) then once it starts to come together, switch to an electric mixer to avoid arm-ache. Beat very well until light and fluffy, adding the vanilla extract and red food colouring if desired.
-Spoon into a piping bag and swirl away. Generosity with the buttercream icing is always a good thing.
-Enjoy!!! 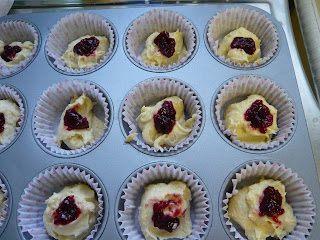 My cupcakes in the cases with jam blobbed on the top. 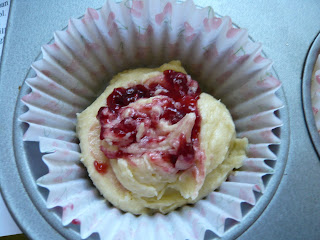 After swirling the jam. Mmmmm, swirly. 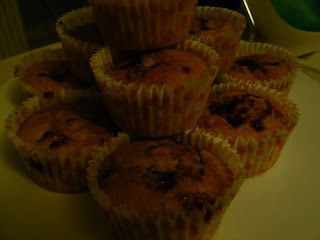 You'll have to use your imagination here regarding colours - what can I say, it got dark! You can probably just make out the raspberry swirl remaining after baking - if you look closely enough! 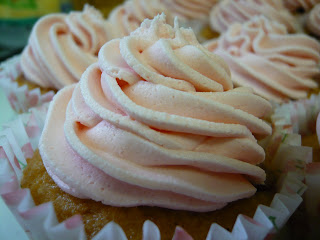 Yum yum, swirly buttercream on the cupcake. I was really proud of the way these turned out and they were extremely well received - gone in a matter of minutes (well, almost) and plenty of compliments!
Posted by Caroline at 21:19

They look beautiful! Your piping really does look pretty. I love the colour.