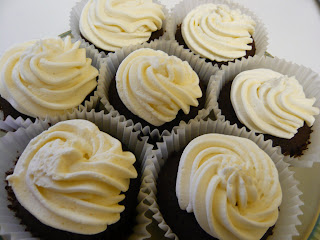 I can't take any credit for the idea here, I saw these a while ago on Hannah's Country Kitchen and fancied giving them a go. I'm still trying to get my buttercream icing to look good and these provided an ideal opportunity to have another go at both buttercream and piping. There seemed to be a dearth of Rolos in my local supermarkets though, so I resorted to using chunks of Cadbury's Caramel instead. They were quite a bit bigger than Rolos though, although it's always nice to have a large chunk of caramel inside your cupcake. You can see from the picture that these didn't rise as much as I was hoping, and the cases seem a little empty, but at least there's plenty of buttercream to disguise this! 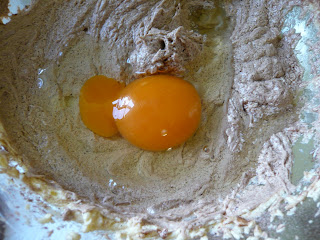 Unfortunately my mixture curdled while I was making them, I can only guess that it was due to having different ingredients at different temperatures and them not mixing properly. It came back when I added the flour though. I suppose this might have been why they didn't rise as much as Hannah's lovely cakes. (You can find the recipe on Hannah's blog). And although I'm quite proud of my buttercream, it isn't a patch on hers yet! More work yet to do there and more tasting, it's a hard life.... 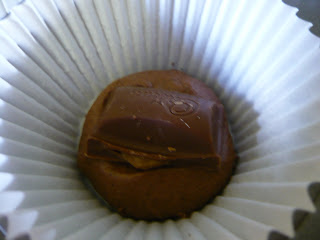 Cupcake half full of mixture with a big chunk of Cadbury's caramel sitting on top. When I was adding the remaining mixture to the cupcake cases I had to be quite careful to try and get the caramel covered - there didn't seem to be a lot of mixture, so perhaps I'd used too much on the base. 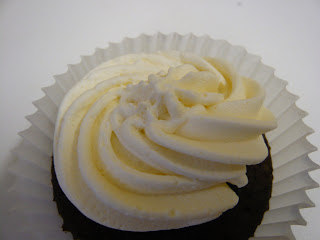 My best attempt yet at piping with buttercream. I've found that to get good buttercream it needs to be beaten for a very long time, therefore an electric whisk is preferable to doing it by hand. The icing just seemed to get paler and paler and fluffier as I beat it and I'm sure I would have given up much too early if I'd been doing it by hand.
These were very well received indeed - very sweet, but my colleagues didn't seem to mind that. There were a number of guesses as to the surprise inside ranging from toffee to mars bar and correctly caramel!
Posted by Caroline at 08:30

They look gorgeous! I do love the thought of adding cabury's caramel. I must try these myself one day.