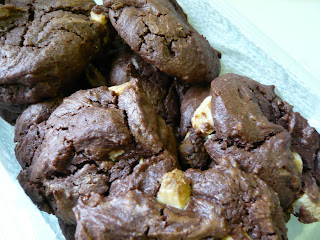 I've been baking a fair bit recently, but haven't got round to blogging most of it, so hopefully there'll be a little rash of posts soonish! So here we go with the first (and quickest) one:
Yum! Sticky, chewy brownie-ish cookies. These were really quick and easy to make and got rave reviews at work (well, lots of people liked them and one comment was 'They're just like something you'd buy at Millies Cookies' - this was meant as a compliment so I'm taking it as one!). I spotted the recipe over at Apple and Spice, so thank you very much Katie, these were a hit and so much easier and quicker than making brownies. I made a couple of changes to Katie's recipe - I only had 40g white chocolate, so that's all I put in, and I cooked them for a little longer, probably about 13 or 14 minutes as they looked very squishy and wobbly at 9 minutes.
Chocolate Brownie Cookies
Ingredients
60g butter
50g dark chocolate
70g caster sugar
70g light muscovado sugar
1 egg
125g plain flour
15g cocoa powder
¼ tsp baking powder
40g white chocolate, chopped

Method
Preheat the oven to 175C/Gas 5 and line a baking tray with parchment paper - these are very sticky cookies as you can see from the picture below. Melt the butter and dark chocolate together in a saucepan until smooth and then remove from the heat. Stir in the caster sugar and brown sugar and beat until the crystals have dissolved (except my crystals didn't dissolve - don't make my mistake and overheat the whole mixture - it turned a bit grainy and separated, but I don't think the end result was affected). Then beat in the egg and vanilla extract. Sift in the flour, cocoa powder and baking powder and beat until all combined. The mixture will turn very stiff at this stage but this is what you want. Finally chop the white chocolate into chunks and stir through the chocolate batter.
Drop rounded tablespoons of the chocolate mixture onto the baking tray as best you can, it's very sticky, leaving a gap between each one (mine didn't spread too much as they cooked). Flatten slightly. Bake in the oven for 9 minutes only (but mine took 13-14 as mentioned above) before removing and leaving for 2 minutes to firm up before transferring to a wire rack to cool. Do not over bake or they will become crispy when cool.
Makes around 14 cookies 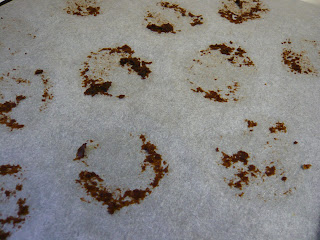 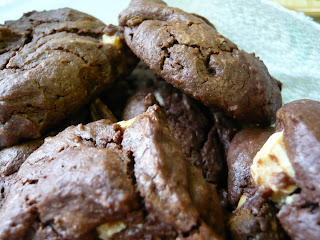 Yummy cookies - J also added her seal of approval to these!