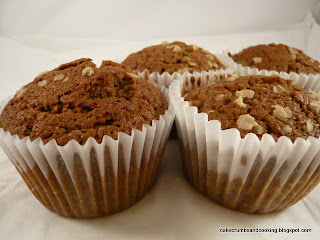 When I saw that Dan Lepard's column in the Guardian a few weeks ago was all about baking with treacle I quickly investigated further - I love treacle and baking with it. So far from being a slightly 'weird' ingredient as Dan proposes, I was keen to see what he was suggesting we could use this gorgeously sticky substance for now. Both recipes appealed, but the Treacle and Caraway Apple muffins sounded amazing. Unfortunately I discovered fairly recently that I'm not really a fan of the flavour of caraway in baked goods. Perhaps it's something I'll come to appreciate more (as I get older, or should that be wiser?) but at the moment, caraway is no-go. Easy enough to leave out though. I also had a glut of greengages and decided to use those instead of the specified apples - there will be time enough for apples later in the autumn and I wanted to make the most of the last of the seasonal fruit available now. I changed the proportion of flours too, and have noted my changes here. 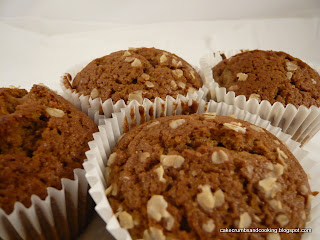 
Since the recipe specifies scattering the muffins with flaked almonds before baking I racked my brains for a suitable alternative and came up with oats - not quite as crunchy (in fact not nearly as crunchy) but provided a little visual appeal to the finished article and a bit of a contrast of textures. I think next time I'd be a little more generous with the oats. I also made 18 muffins out of this mixture, which was perfect for me - 12 would have made very large muffins for my requirements. 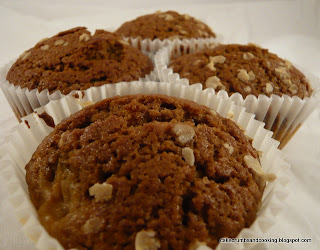 These were immensely popular at work, and rightly so. The combination of flavours - the treacle, vanilla and then the soft delicate plum were great together. They were beautifully moist and the greengages worked superbly in place of apples, becoming deliciously soft and squashy. I'm sure that any soft plum would work well (although I'm not sure about those ones that are bullet hard and available year round). The treacle flavour was definitely there, adding depth and background, but if you're not a treacle fan, it wasn't overwhelming. I gave my version of the recipe to an interested colleague. I hope she enjoys them as much as the rest of us did. I'll definitely make these again and would recommend you make them too!

I'm not surprised they were popular. They look and sound amazing.

Your changes to the recipe still sound good and the muffins look very appealing.

the combo really does sound intruiging and I love greengages so I can imagine how good these tatse!

I have never cooked with black treacle before but it's an ingredient I remember seeing in my mum's cupboard when I was growing up so I'll have to find out what she used to make with it. I love the colour of these - they look delicious.

I find it hard to do anything with greengages other than scoff them when I can find them! These look lovely though.

Wow what a fabulously unusual but tasty combination...I love a bit of a treacle and I love the sound of these muffins...I may have to try them immediatley! :-)

If only I had a glut of greengages or plums of any sort for that matter, I'd be over the moon. These muffins sound a lovely way to use them though.

Great combination - the greengage isn't given the praise it deserves in my view. Oddly enough, I really didn't care for caraway until I got to be an old bloke. I use it quite often these days. It might be something to do with less sensitive taste buds or maybe I just can't remember that I don't like it.

I love treacle too and am also interested in new ways to use it. I have made a plum gingerbread pudding so I can imagine these flavours working - in fact I imagine some spices like you might find in gingerbread going well here. I am a bit shy of caraway - I often think I have grown up and got to like it and then find myself shying away from it still.

Suelle - thanks, I was hunting around for something to stop them looking just plain brown...

Dom - the greengages work surprisingly well, you'd like these.

Corina - black treacle is such a lovely baking ingredient. I hope you find out what your mum used it for.

Foodycat - one to bookmark for next summer/autumn when there's a glut then...

Laura - they're really good. I was pleased with how the flavours complemented each other.

Choclette - I'd suggest a glut of apples as Dan's original recipe recommends, but there aren't even that many apples around this year.

Phil - yes, we should celebrate the greengage much more, such a tasty plum. I might give up on caraway for now and try again in a few years time...

Johanna - plum gingerbread pudding sounds delicious. I'm glad I'm not the only one who isn't that keen on caraway.