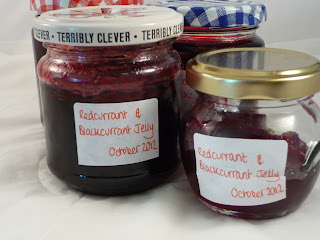 I have to confess that this is not really a 'how-to-make' redcurrant jelly post. It's a 'how-I-made' red and blackcurrant jelly, based on what was available and a bit of experience.


Redcurrants aren't in season right now. Neither are blackcurrants. But by the power of technology (freezer - gasp!) I had far, far too many redcurrants and the only way I could really think of moving them out of the freezer is to make them into jelly. Redcurrants are full of hard seeds meaning that they don't really respond very well to jam making but are great for jelly, jelly being essentially refined jam. 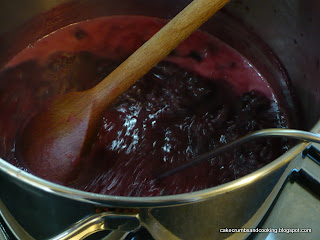 So I dug through my freezer drawers and located the offending (in terms of taking up space!) redcurrants and found I had 1.5kg (I think - this is a while ago now). Using the basic recipe for redcurrant jelly in Pam Corbin's very lovely little book 'Preserves' (River Cottage Handbook No. 2) - I'd recommend this to anyone interested in preserving I found I needed 400ml water for every 1kg redcurrants. The currants and water are simmered until they are tender - Pam specifies 45 minutes, but I suspect mine were done sooner because the process of freezing and thawing them starts breaking down the berries anyway. 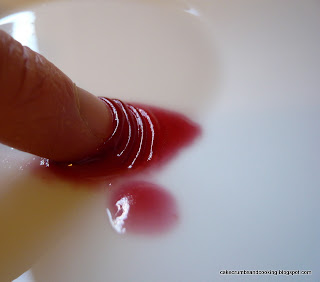 At this point the berries, stalks and random bits of garden (leaf, stone... don't worry, there weren't too many leaves in there) are strained out. Long time readers may remember that last time I made redcurrant jelly I bought the jelly bag but not the strainer. I decided to go for broke this time and bought the whole set - so, so much easier. I thoroughly recommend it. 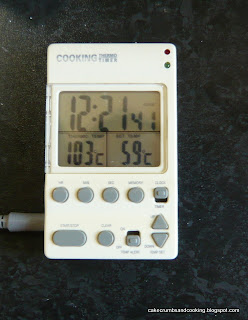 This said 104... for setting, but I wasn't quick enough with the camera

Making the jelly then involves the addition of 450g granulated sugar to each 600ml juice - you don't want to poke the bag or you won't get a clear jelly. More on that point later... You then bring it to a rolling boil and boil for 8 minutes or until a set is reached. This will occur at 104C or when a little of the jelly placed onto a cold (freezer cold) plate wrinkles when pushed with a finger. Pour the jelly carefully into sterilised jars and then add a waxed disc and seal with a lid. The jelly keeps for 12 months according to Pam.

This represents the jelly I made with the juices that dripped through the bag (there are two jars in the background too, it's not just the jar and a bit at the front). After the redcurrant mixture had cooled a little I decided to squeeze the bag and see if I could get any more juice out. The answer was a resounding yes - there was much more juice in there and I squeezed and squeezed the jelly bag until all that remained inside were dry skins and stalks. I repeated the jelly making process again for this new lot of juice (although since the previous lot had set as I was pouring it into the jars I decided to dilute this second lot with a splash of water - unmeasured, sorry) and got as much again in yield. 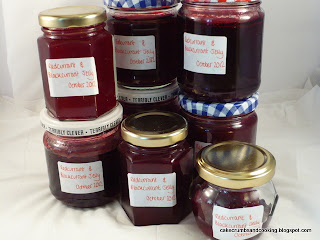 Almost double the amount - both first and second batches

Yes, this second batch is cloudier, but it seemed such a shame to waste that redcurrant goodness. My thinking is that I'll use the clear batch for tasks such as glazing fancy fruit tarts (hah, in my dreams!) and the cloudier batch for adding to casseroles for depth of flavour, or for making the traditional Cumberland sauce recipe that Pam gives in the book, where the clarity of the jelly is unimportant. So my conclusion is that since I don't intend to enter WI competitions where the clarity of my jelly is all-important I'm going to carry on squeezing that jelly bag. 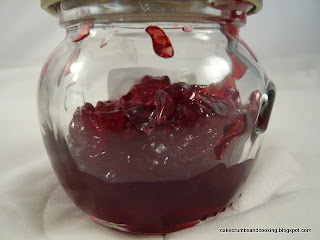 This wasn't a problem I had last time, but this time round there must have been so much pectin in my redcurrants that the jelly actually set as I was pouring it into the jars. You can see in this small jar that the surface isn't level because I was essentially scraping solidified jelly into the jar.... certainly no worries about a set here!!! I ought to point out that although this is called red and blackcurrant jelly, there were probably about 80-100g blackcurrants mixed in with the redcurrants when I froze them, and just those few have changed the colour significantly from a pure redcurrant jelly.

I'm entering this rather unseasonal jelly into Teatime Treats - hosted this month by Kate of What Kate Baked and co-hosted by Karen of Lavender and Lovage. The theme this month is Jams, Curds, Chutneys and Conserves. Now although jelly isn't mentioned specifically I don't think I'll get booted out for submitting this one!

yum - I really love redcurrant jelly. Interesting that you re-squeezed - I know what you mean about wanting to get as much juice out as possible.

Most definately you won't get booted out! Thank you ever so much for entering TTT and for such an informative post- I've never made redcurrent jelly before

No risk of getting booted out....and a lovely jelly which of course is a preserve so perfect for TTT! Thanks so much for entering, Karen

What a great yield, Caroline! It's such a joy to have jelly that sets well, isn't it? We don't squeeze the bag, but we will occasionally reboil the fruit with more water a second time if there's more to be had from it, and let it drip through again...

Well it looks a pretty fine way to make jam to me. Lovely colour.

Sally - it just seems so wasteful not to squeeze it!

Kate - glad to be of service! I'd definitely try jam before jelly though - as you've done.

Celia - interesting that you re-boil, I wouldn't have thought of that. I think it requires more effort than I'm willing to make though!