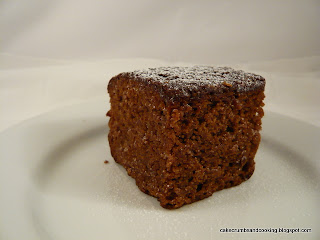 Hmm, apparently my ability to take photos of brown squares of cakes hasn't improved yet...

This is the perfect cake to have in your repertoire - it's so, so easy to put together and quick to bake but the flavour and texture are just divine. I have made it a number of times before, but have tweaked slightly to suit my taste. The original recipe is from Nigella Lawson and it's the Storecupboard Chocolate Orange Cake in How to be a Domestic Goddess. It is also a very adaptable recipe - Nigella herself uses exactly the same ingredients in her Chocolate Cherry Cupcakes in the same book (swapping cherry jam for marmalade), so if you're wondering whether the recipe works as cupcakes, it does. (I have tried this out too, and the cupcakes are very good!)


When I have made it in the past I followed the instructions to use an 8"/20cm round springform tin and always found it needed slightly longer than the specified 50 minutes to bake and it tended to catch and overbrown slightly around the edges before the middle was done. I've made it in an 8"/20cm square tin and after 40-45 minutes it's perfectly cooked around the edges and in the middle - win/win. 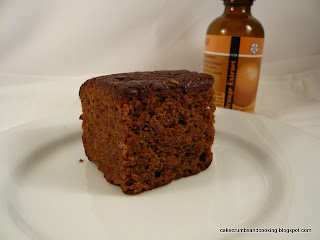 The quality of the marmalade is important in the cake. I know that sounds like a silly thing to say because of course it will be - the marmalade is a key ingredient. From experience I know that using too bitter a marmalade will not be very pleasant - even though there is a lot of sugar in the recipe, the bitterness still comes through. This time, I had a jar of marmalade that I had used for a couple of other cakes where I had wanted that bitterness, and had found this particular jar sadly lacking. However it struck me as perfect for this cake, where I don't think you actually want a particularly bitter marmalade. I did want to make sure that the orange flavour was there though and added some of my latest favourite - orange extract (I bought mine from Lakeland - a dangerous place to shop...). This really boosts the orange without any bitterness. 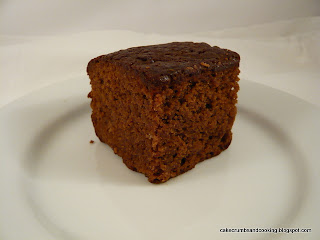 Method (this is truly simple!)
- Preheat the oven to 180C/Gas 4. Grease and line an 8"/20cm square shallow tin.
- Melt the butter over a low heat and when it is melted add the broken chocolate. Stir until melted.
- Add the marmalade, sugar and extract and stir until well amalgamated.

- Add the eggs, beating them into the mixture until well combined and then add the flour, folding it through to make sure you don't have any unmixed bits.
- Pour into the prepared tin and bake for 40-45 minutes.
- Remove from tin and allow to cool, or eat hot as a pudding with icecream. 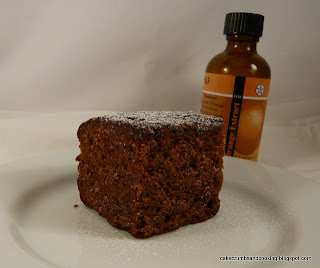 I love this cake - it's moist and fudgy and on the start of the cake to brownie scale - at the cake end but with a slightly brownie-like texture due to the high sugar content. The peel in this marmalade is quite fine and soft - I missed the chewy texture of the peel in the more bitter marmalades I've used in the past, but I didn't miss the overall bitterness that too strong a marmalade can give. Adding the orange extract worked well here to boost the orange flavour, as I knew the marmalade didn't have enough punch. This is perfect for an indulgent treat during Chocolate Week.


This would be a great family recipe to make with little ones. The melt and mix method is easy for little hands and the chocolate orange flavour is great for children too - especially if you do what I did and use a relatively mild-flavoured marmalade and boost the flavour with orange extract. This avoids any unwanted bitterness. It's also perfect for harrassed mums who are having dessert demanded of them but haven't got time to think what to make - perfect with custard or icecream. Any leftovers are perfect as a gettting home from school treat. I really hope you make and enjoy this cake - it's one of my perennial favourites!

I've made this cake a few times- a firm, firm favourite! And I couldn't agree more about the marmalade...

I love this cake too - it is so effortlessly impressive. I haven't made it many times so I found your thoughts on the marmalade interesting (maybe it is that I am not a marmalade lover)

I couldn't understand why so much fuss was made about this cake, it didn't sound up to much to me. That is, until I made it last year - now I completely understand and am just wondering why it is, I haven't made it again. Yours looks gorgeous, although I do like a good homemade bitter seville orange in mine.

I love marmalade in cakes and like choclette I'm a fan of the bitter kind but adding chocolate is something I've not done and I LOVE the whole choc orange combo thing! Great looking cake. Thanks for the inspiration!

I LOVE marmalade in cakes and this one looks like a winner! I usually add marmalade to ginger cake - but, I think I need to try this recipe now too! Karen

I am so lucky you posted this . I just brought a beautiful Italian marmalade home and was going to make a ginger and marmalde cake not any more its going to be squidgy and choclate

Lovely looking cake - Hubby and my Sis in Law would surely fight each other to the death over this one ;0)

Love the look of this! My boyfriend has been hankering for some sort of chocolate orange cake concoction, so I might have to try this out!

Kate - it's such a reliable standby isn't it.

Johanna - yes, it's more impressive than the work would suggest. I think marmalade can be a very personal thing!

Choclette - yes, it really shouldn't be anything special when you look at the ingredients, yet it is. I do sometimes love a good bitter marmalade, but sometimes it can be overpowering. Depends on my mood!

Dom - you should definitely try this with a good bitter marmalade - you'll love it.

Tania - I really hope you like it! Glad to have provided some inspiration and thanks for leaving me a lovely comment.

Dipika - I hope you like it if you end up trying it.

I love the name and the idea of this cake! Just think of the jammy cakes one could make:)

Will have to try this sometimes! thank you for sharing:)