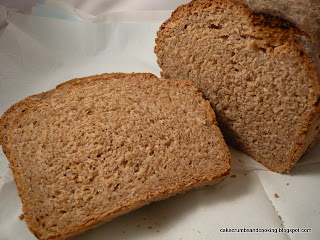 I was really pleased when @EvidenceMatters announced that for the December #shortandtweet challenges the first week was going to be the wholemeal bread recipe. I've made this before, but it must have been in pre-blog days because I can't find it anywhere in my archives, and more tellingly, I can't find any photos of it. It's been so long since that I take it for granted that making something means taking photos at some point that it really must be a long time since I made it!
I remember it being a very well behaved loaf, rising nicely, and not being too dense at all. I had previously had little success with fully wholemeal loaves, finding them very dense indeed, almost inedible. So to come across this recipe (first published in the Guardian Guide to Baking in November 2007) and to be found on page 31 of Short and Sweet, was a revelation. I think I then moved on to making 50/50 wholemeal and white loaves, just to lighten them a bit more, but I was pleased to have the excuse to make the bread in its original form. 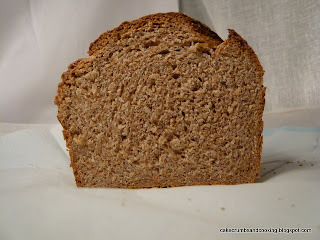 As Dan says in the introduction to the recipe, wholegrains are important for health and a good source of dietary fibre, as discussed further by Lou of Please Do Not Feed the Animals, here. However, it's down to personal choice, and a lot of the time I choose to make partly wholemeal loaves, but I also choose to enjoy white breads too. Joanna has made a couple of different takes on this week's recipe here, showing how adaptable it can be. Some didn't like it though - Misk found it not quite her cup of tea. 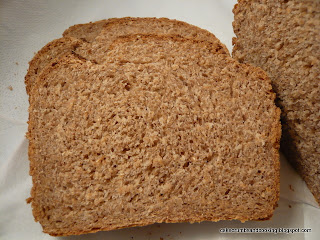 I quite enjoyed this bread, I like the wheaty nutty flavour, and find it an adaptable bread for making lunchtime sandwiches, and it's nice to feel that you're eating something really good for you (negated by the cheese filling my sandwiches usually contain....). I made only minor changes to the recipe - I added 33g butter rather than 50g, because that's what came to hand. The other change was regarding the vitamin C. I did at one point have a pot of Dove's Farm vitamin C powder, but it disappeared due to lack of use (literally, it seemed to evaporate) so I didn't bother replacing it. This left me with a vitamin C dilemma. I added 15ml freshly squeezed orange juice instead. 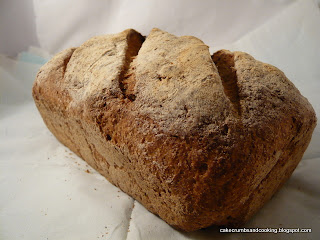 I was quite happy with the way the bread turned out, apart from that the dough seemed rather crumbly to work with, rather than elastic. I'm not sure why this was - my bread flour wasn't the freshest ever but I don't recall this crumbliness from previous attempts at the dough. Instead of forming a smooth ball, the dough broke and sheared. Any thoughts on why would be gratefully received. This contributed to the 'rustic' appearance of the loaf.... well, at least it looks homemade!
Posted by Caroline at 18:00

Looks like a classic wholemeal loaf to me - I know what you mean about crumbly dough too. Thanks for your comments over on my blog today. At the risk of duplication, I agree with you :)

Looks a lovely tempting loaf. Intrigued by the orange juice - that didn't even occur to me. Would have been so much easier. I wonder what Dan would think of that as a substitution?
Mind you, I now have a tub of vit C tabs to be used up making these loaves.

Looks like a great homemade loaf. Could you taste the orange juice in the bread?

Looks like a great wholemeal loaf to me! I remember being intrigued by the addition of the vitamin C when I first read Dan's recipe - do you think orange juice works well instead?

i've seen quite a lot of good reviews about dan lepard's wholemeal bread, actually, about dan lepard in general. got to give his recipes a try one day definitely, this looks awesome!

MissCakeBaker - it's pretty good - give it a go!

Lou - thinking about it, I'm pretty sure there wouldn't be nearly as much vit C in 1tbsp orange juice as in half a tablet! Perhaps that's why my dough was a bit hard to handle. Don't know what Dan would think!

BakingAddict - no I couldn't taste the orange juice, but I don't think I have a particularly sensitive palate ;-)

Hungryhinny - I'm not sure how the orange juice works in comparison because it's so long since I made the loaf with the proper vit C. Sorry!

Shu Han - Dan has some great recipes, there are loads of them on this blog - there's a tag specially for Dan Lepard recipes I've made!