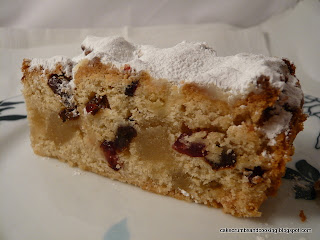 I don't often bake things that I cannot eat (for obvious reasons of greed!) but J loves marzipan, Stollen is a very festive and seasonal bake and I was intrigued by this recipe (it's the second one down), recently published by Dan Lepard on the Guardian website. I had previously thought that Stollen was always a yeasted treat, but this was a non-yeasted version of Stollen. I have made a more traditional version (also to a Dan Lepard recipe) in the past, and you can see it here. I was interested to see how this one turned out and how it was received, given that rich, fruited, spiced, buttery eggy doughs take an age to rise, especially in my chilly kitchen.
As I've been browsing all the Christmas goodies popping up on people's blogs recently, I noticed that Jules over at Butcher, Baker had made a Stollen and she notes that both yeasted and non-yeasted versions are widely made in Germany, with a yeasted version probably being more traditional. 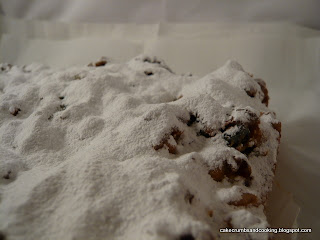 I followed the recipe fairly closely, but made one fairly major change. I didn't have pistachios and when I went to buy them found that they are horrendously expensive. I'm sure this will not come as a surprise to the nut-eaters of you out there, but as someone who never looks at nuts I was horrified at the price I was going to have to pay, and (rather selfishly) more so because I'd never get to enjoy these bars or note the difference that the pistachios made to it. So apologies Dan, I substitued dried cranberries for the pistachios - totally different texture and flavour, but cost an awful lot less! I did however, splash out on some better quality marzipan. If you read the packets of supermarket marzipan most of them only contain around 25% almonds, but the Anthon Berg brand (bright pink/purple packet in the UK) contains 60% almonds - big difference!
I needed to cook these for much longer than 30 minutes. I think it was nearer to 50 minutes, and may even have been a little longer. I used a fairly shallow 8" square tin, so I'm not sure what, if anything I did wrong, but they definitely weren't done at 30 mins. 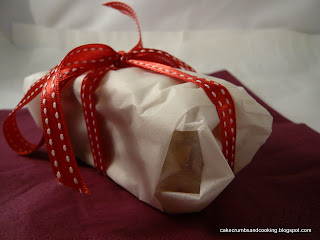 I made these for a staff lunch at work where we all brought something in, and these were really popular, with people commenting on how nice they were, which is very gratifying. I also sent a piece to my chief taste tester, J, and thanks to Royal Mail it arrived in one piece. She absolutely loved it, and so all of my taste notes are thanks to J. 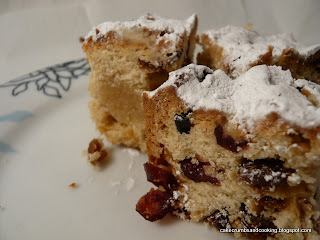 The stollen is really moist and almondy - no doubt due to the ground almonds in the dough and the chunks of marzipan spread throughout. J thought this better than having one long chunk of marzipan down the centre, but I think that perhaps the marzipan had become a little lost from her description. However, she said that the orange flavour was subtle, and it was moister than a traditional stollen, which is what I had expected. The texture is like a very enriched bread dough, but without the problems those doughs tend to have of not rising very well in my cold kitchen - probably a more forgiving stollen to bake. I think, all in all, that she loved it, and was possibly disappointed that only one piece found its way to her in the post! 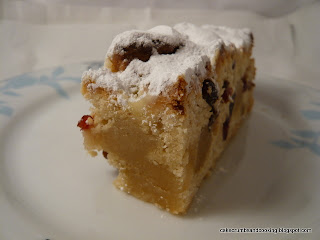 That looks good, I love marzipan.

The marzipan lovers in my family would adore this recipe, looks so festive with all those fruits and nuts studded through it.

It looks lovely. I adore stollen but the one I made last year wasn't very nice, so I will stick to buying! You are kind to bake things you can't eat.

Yours looks a lovely version of the recipe; now that I've made it Dan's way, I'm prepared to try variations, and using cranberries is under consideration! I use the Anton Berg marzipan too.

When I saw the title I wondered if it was going to be Dan's recipe. Looks amazing and I'm glad everyone enjoyed it. Have a Happy Christmas!

I adore marzipan and love the look of this. I think its great that it doesn't use yeast which should make it easier to covert to being gluten free. Hurrah!
Have a wonderful Christmas

Actually an interesting read. I live the way you've dissected each mouthful and reviewed via friends. Makes it very good for us non stollen eaters!! Anyway it looks very pretty and quite festive x

Oh this looks really lovely! I thought it was yeasted too..but this makes it a lot easier. I relaly love your photos..you've made the stollen look nice and festive..plus the density of it is so appetizing

wow so colourful and tasty.I would love to invite you to send this recipe to simply.food's Lets cook for christmas red/green event.

As another marzipan lover, your stollen sounds absolutely delicious and I love the way you've wrapped the piece destined for J. Wanted to have a go at making stollen this year, but haven't managed it - none of yours left I suppose???

Janice - you'd love this then!

Chele - it does look festive doesn't it!

Foodycat - thankyou. My mum reckoned this was better than a yeasted version so give it a go!

Suelle - the Anthon Berg marzipan just seems better doesn't it. Hard to tell for me though, given that I can't taste it!

Katie - I hope you can convert this to GF.

Dom - it's the only way if you can't eat it yourself ;-) Thanks for the comment!

Brittany - it went down very well with testers!

Johanna - this would be a great recipe to try then - not nearly so much hassle because there's no waiting around for it to rise as with yeasted versions!