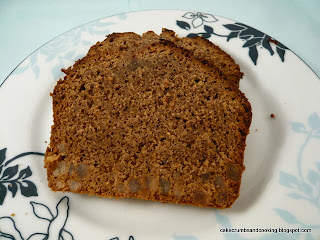 I seem to be on a bit of a Dan Lepard baking spree at the moment. The latest cake I made was one of his more recently published recipes, this honey and treacle cake. When I looked at the ingredients I had everything in my storecupboard (in almost sufficient quantity!) so it was fairly inevitable that I would end up making this, especially as I love this type of ginger cake and am currently trying to use up a bag of rye flour that seems to be never ending. I think I have quite a few recipes that require rye flour, but not as the main component, so the bag seems to last quite a long time, and I'm fed up of seeing it, sitting there, staring back at me and taunting me with it's everlastingness. There are a couple of bags of wholemeal flour doing the same thing - expect to see recipes to use those up too, if I have my way (not likely, I'm not very organised!). 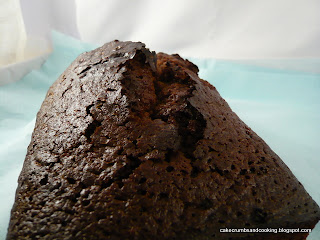 Anyway, back to the recipe. It was also very pleasing because it allowed me to use up some candied peel that was hanging around (although I didn't have enough, so just used half of the required amount) and most pleasingly of all, some honey. I don't normally have a problem with using up honey particularly, but this was a runny honey in a squeezy bottle, and had crystallised. I'm pretty certain there's nothing inherently wrong with crystallised honey, but it's pretty near impossible to get it to come out of the squeezy bottle once it's crystallised. And yes, I know I could warm it up and melt it, but in my experience it just recrystallises. This recipe handily allowed me to use up my honey in one fell swoop, so I cut the top of the bottle off to allow me to spoon out the honey inside.
You can find the recipe here. As stated above, the only changes I made were to use half the amount of candied peel (I used lemon) and as I didn't have mace, I used nutmeg instead, mace being the lacy tendril that covers the nutmeg as it grows. I also forgot to ice the cake, oops! 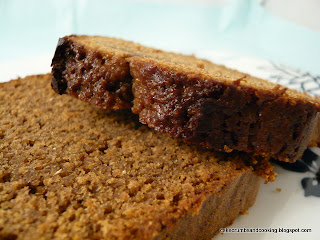 It was a lovely gingerbread type cake. As Dan says, the crumb is moist and chewy from the rye, and as Suelle has noted, it's actually quite difficult to define the flavour of all the different spices. They all seem to meld together, and the black pepper is identifiable by the gentle heat that it provides in the finished cake. Really delicious. It probably would have been even better if I'd remembered the icing, but never mind! The only diappointing thing was that all of my peel sank to the bottom. I had high hopes for it staying suspended in the mixture, as pictured in both the Guardian photograph and Suelle's picture, but sadly it was not to be for my cake. Definitely one to bear in mind for ginger cake lovers who are after something a little different because although this isn't really a ginger cake I think it'd appeal to the same group of people!!! 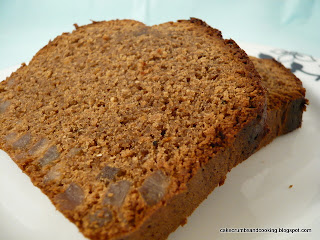 The nice thing about the ginger being at the bottom is that you have something to look forward to as you munch your way down the slice. Your cake looks really delicious and moist. I've only used rye flour in my bread so intrigued by the idea of using it in a cake. Like the idea of the black pepper too.

That looks lovely C. I do love a spiced cake. Mmmmmmmm :P

Yummy-that sounds a really sophisticated ginger cake, I'm sure it went down a storm!

Great cake, isn't it? Shame about the peel sinking, C, and very strange too! Perhaps that's why Dan used so much - all the pieces hold each other up! ;)

Oooh, first Suelle and now you, I am so going to have to try this cake, C! Love ginger! :)

I love this kind of loaf cake. PErfcet to munch on in the afternoons. Love the sound of all the different spices with the honey. I can almost taste it. Keep the Dan recipes coming, I love seeing how they turn out

Damn. This looks good. Really good! Muscavado sugar is a real pain to try and find around here, but I love it. It gives such a lovely flavour. I think my dad would love this cake, and I'm seeing him next weekend, I think a good excuse to give it a whirl. Thanks C.

But if you don't ice it you can maybe justify buttering it? And that would be lovely!