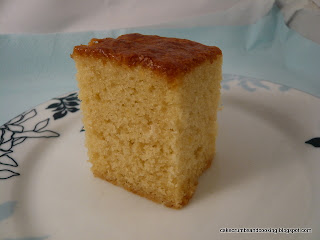 Although I read lots and lots of different blogs, there are some that I find myself coming back to time and time again. The recipes are appealing and it seems as though I'm on the same wavelength as the author of the blog. One of these lovely blogs is Mainly Baking, written by Suelle. I think that part of the reason is that we both enjoy Dan Lepard's baking recipes from the Guardian newspaper, but there are lots of other recipes that Suelle posts that I find myself thinking I'd really like to try. She has recently had to change her style of baking for health reasons and has been doing a lot of low-saturated-fat baking (note: not necessarily low fat, but low saturated fat). I've been so impressed by the range of baked goods that use oil instead of butter and they all look just as delicious as those made with butter! It's always good to know that there's an alternative to butter laden cakes, and Suelle is building up quite a collection of tried and tested ones. I also really appreciate the honesty that she reviews her recipes with - if it's not quite right or there are receommended changes to a recipe I'd rather know before starting! 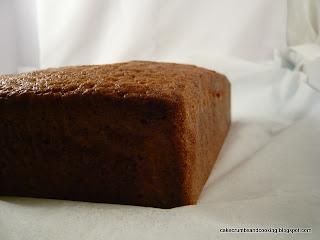 This recipe is based on a Mark Hix recipe, found in the Independent newspaper quite a number of years ago now. I followed the recipe as given (using all flour as stated, rather than Suelle's adaptation of cornmeal), apart from using the zest of a lemon and just the juice of the orange (it had already had it's zest taken for something else!). I baked it in an 8" square tin and found that it didn't sink at all on baking or cooling. I'm fairly sure it took longer than 45 minutes though, probably about an hour, and at that stage it was still perfectly moist and hadn't overbrowned on the top. The other change I made (and the one that renders this cake dairy free) was a simple substitution of rice milk for the milk specified in the recipe. I rarely drink milk and it's a pain to have to go and buy milk especially for recipes, so when I found I didn't have any dairy milk I opened a little carton of rice milk and used that instead. It's a fairly light flavour and so I don't think it either enhanced or detracted from the citrus and olive oil flavours in the cake.
I have avoided making cakes with oil as the main fat element for a while now, I think possibly because I sometimes think that muffins made with sunflower oil aren't as nice as those made with melted butter - there seems to be an aftertaste that I don't like, but perhaps this is just due to the sunflower oil and I should try a different oil instead. The other reason I haven't really made olive oil cakes before is that I had always assumed that the cost would be prohibitive. I was surprised though, that this was probably cheaper than a similar cake made with butter. I managed to buy 500ml of extra virgin olive oil (not single estate or anything amazing, but perfectly acceptable) for £1.74 on half price offer. 250g of butter is now at least £1.10, and that's for a supermarket's 'basics' range. Most seem to be around £1.30-£1.50, which is massively expensive. I'm sure that about five years ago butter was about 60-80p for 250g, and that wasn't even basics ranges! So I shall be looking at olive oil cake recipes more closely from now on! 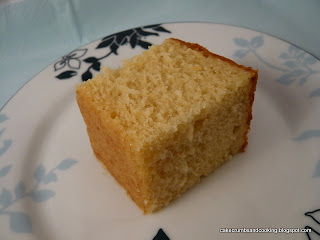 I really, really enjoyed this cake. The flavour of the olive oil wasn't overpowering, but there was a definite 'something' extra to the flavour. The citrus and oil were well balanced, but if anything, I would add the extra grated rind that I missed out to enhance the citrus flavours more next time because the citrus didn't quite come through strongly enough for me, which is entirely my own fault! The cake wasn't oily, but was beautifully moist and close textured, and I can imagine it marrying perfectly with soft summer fruits. I'm glad that I've got a couple more pieces in the freezer to enjoy at a future date!
Posted by Caroline at 22:00

I too was recently very pleasantly surprised with how light, moist and tasty a recent cake baked with olive oil turned out to be. And absolutely, with the high, sometimes prohibitive prices of butter, definitely something worth exploring further!

Oh I love olive oil cakes! They do have such a lovely texture..and yours looks like no exception. It looks really yummy standing up tall and high on that plate.

Thanks for all the compliments, C. I'm so pleased this recipe worked well for you - it's always a little worrying, when recommending recipes, that others won't have the same success, or worse, won't like the cake!

I've only use vegetable oil so far in baking but will definitely give olive oil a go! I like anything citrusy so am sure will like the cake, it looks like it has a delicious crumb to it!

And I know what you mean with butter prices - I definitely don't bake as much anymore! Hips will probably thank me though in years to come ;-)

I haven't tried a cake baked with olive oil yet, I don't quite know what is putting me off. Your cake looks lovely and light and it has risen so well. I think I am going to have to re-think the whole oil question :)