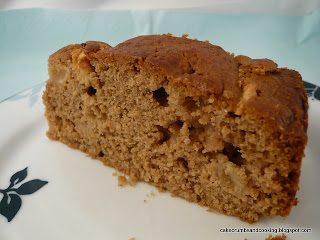 Sometimes there really is no good reason for making the cake I end up making. I guess this is pretty much one of those times! My only criteria for the cake I wanted to bake was that it needed to use three eggs. That's it. I didn't want to carry out an extensive search through various recipe books, umming and ahhhing over which cake to make, weighing up pros and cons, deciding if I could be bothered to go to the shops and get extra ingredients.... The book I chose to find my recipe in was Sue Lawrence's On Baking, a book that regular readers will recognise, as I have mentioned it a few times here. I find this book really inspiring, and often get it down from the shelf just to browse - there are so many recipes I'd like to make in it, and so little time! She didn't let me down this time either, with this delicious recipe for Somerset apple cake.
As I said, I wanted something that I had all the ingredients already in the house for, and so I have adapted the recipe slightly. As a slight aside, why does my local supermarket currently have an offer on Bramley apples? They are British apples, according to the bag they're sold in, and given that it really isn't apple season at the moment, all I can think is that they're selling off all of the apples that remain in cold storage as they must be reaching the limit of their cold-store life. Probably not too many nutrients left in them then.... but to be honest I don't really eat cake for the nutrients so I don't mind too much! 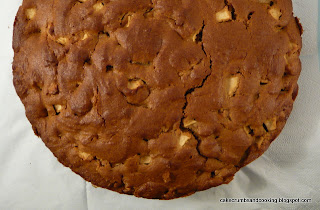 Somerset Apple Cake
175g butter, softened
175g light muscovado sugar (or light brown soft)
3 eggs
1tbsp black treacle
225g self raising wholemeal flour
1 tsp each mixed spice and cinnamon (though I have a feeling that I added a touch of ginger too, wish I'd written down what I added!)
450g bramley apples
Method
- Preheat the oven to gas 3/ 160C. Grease and line the base of a 22cm springform cake tin.
- Cream the butter and sugar until light and fluffy.
- Add the eggs, beating well after the addition of each one, and adding a little of the flour if you think the mixture is going to curdle. Add the black treacle and beat in well.
- Add the remainder of the flour and mix well to combine.
- Peel and core the apples and cut into small chunks. Add these to the mixture. The original recipe specifies adding a little milk (up to 3tbsp) but I didn't because I forgot.
- Bake for about 1hr 15mins until a skewer inserted into the middle comes out clean.
- Allow to cool in the tin, brilliant served warm.
- Enjoy with a cup of tea, or with a dollop of creme fraiche, or even some custard if you're somewhere cold enough!
The mixture was slightly stiff (but this is probably due to me forgetting to add the milk specified in the original recipe) but I wasn't too worried as I reckoned that the apples would release some moisture as they cooked. 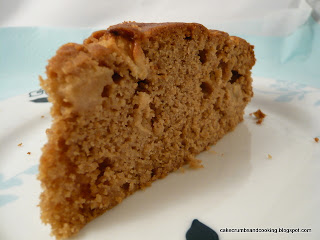 This was a gorgeous, soft, moist cake. The moist juicy apple paired perfectly with the soft cake which had a lovely gently spicy flavour, and a depth of flavour from the light muscovado sugar. I loved the way the apple pieces at the top of the cake had slightly dried out in the oven and become a little chewy! This would make a perfect dessert with some apple puree and a blob of creme fraiche or a ball of vanilla icecream. Or if you're in the middle of autumn/winter, custard would be a perfect partner. A great, versatile cake!
Posted by Caroline at 20:10

I know a lot of folks who don’t eat eggs (they’re allergic, for health reasons, or concerns about animal cruelty). Here’s an awesome site that gives tips on cooking and baking without eggs: http://EggFreeLiving.com

Thus does look a great cake- I can imagine nesting down with a good book, a warm autumnal fire and a delicious slice of your Somerset Apple cake!

I love apple cakes! This looks so good and I bet would be gorgeous with custard.

What a lovely cake, I have such a soft spot for apple cakes it has to be said ... although I have never actually made one myself. Thanks for sharing the recipe.

I adore this cake but I particularly love the inclusion of treacle!... nice x

As you and Suelle mention this book quite a lot I found a second hand copy a couple of weeks ago and it has arrived and I haven't looked at it. But now I am going to as that cake looks scrumptious. And I have been umming and ahhing about a cake for a few days now. Thanks for the prompt!

Looks perfect,C! I don't think the omitted milk has done it any harm at all!

Oh yum! This looks like something my mum used to make. I think it's going to have to go on the "to bake" list!