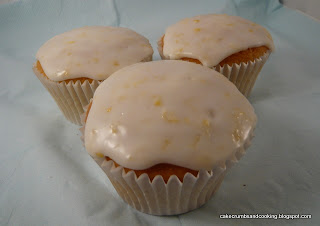 I've seen a couple of recipes around recently using cream as an ingredient, not surprisingly, Dan Lepard is behind a couple of them, but Suelle started a discussion on Dan's forums about using cream as an ingredient in baking which was very interesting. I decided that I really ought to do some investigating into this..... well, seemed only right to have to try out a recipe and see what the texture was like for myself. 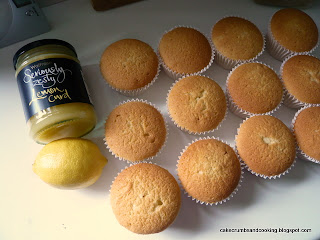 Baked and ready to be filled
I decided to make Dan's Orange custard cream cupcakes, fairly recently published in the Guardian How to Bake column. Except that I was planning to be lazy and not make the orange cream filling - I wanted to fill them with curd. I meant to go to Waitrose because they do a Jaffa orange curd, but I didn't make it so decided to switch all the flavours to lemon, lemon curd being much easier to get hold of (yes, my lemon curd is from Waitrose, I'd already bought it on a previous occasion!) The only other change I made was to use self raising flour instead of plain plus baking powder, which is just my personal preference.
I don't have posh lemon oil, mine is from Sainsbury's and the label tells me that it's only 12% lemon oil, not pure lemon oil, so I decided to use 2tsp rather the specified 1tsp. I'd love to try the real deal here though! 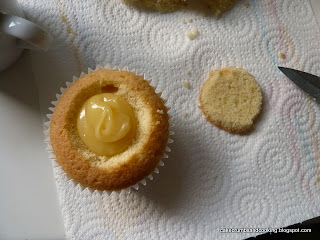 It was rather therapeutic, digging out a little mound of cake, and lopping most of it off (mmm, baker's treat!) before filling the hole with lemon curd and replacing the lid. 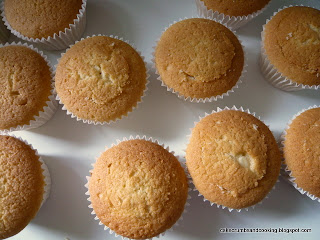 Lids all replaced, ready for the final icing. 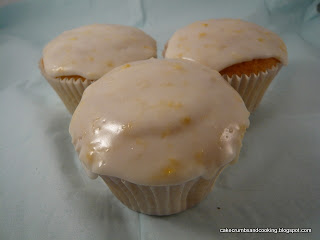 You can see that some of them showed their secret a little more than others... over-generous hand with the lemon curd, or insufficiently deep hole!
Anyway, nearly enough photos now, what did they taste like? Very good! The texture (see picture below) was extremely fine grained, they were very delicate cupcakes. The lemon flavour was good, but I bet it would be stunning if I'd used the extract Dan recommended. I really must repeat the recipe with that extract! The lemon curd filling worked well with the cake - it contrasted nicely as a rich, smooth texture against the slightly drier, yet still moist cake crumb. The sweet lemon icing on the top was good too - another contrast. Next time I'll use a finer grater than my coarse microplane, and I might add a little of the lemon extract/oil to the icing too, just for a further flavour boost! 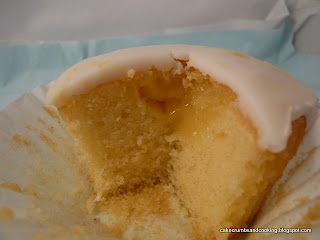 I love lemon. Your cup cakes look lovely. I use sainsbury's lemon extract. I must go look at the label now LOL

These look fab. The last time I made a lemon curd to fill a cupcake it was too runny and all seeped in (still delicious though.)

I love the idea of cutting them open, surgeon style, to add the lemon curd... not to mention the added bakers treat! The lemon muffins I made recently involved adding the lemon curd to the unbaked mixture but they didn't taste as lemony as I was hoping, I will definitely give this method a go, they look great!

Oooo I adore lemon curd - I bet these are so moreish

I love baking with cream - your cakes look fab; particularly that last shot where we see inside the cake

Oh yes indeedy! Lemon curd in the centre? I'll take any way to sneak a little more of that sweet goodness into my life.

Your post made me smile this morning. Baker's treats absolutely - what pretty little cakes they turned out to be. Lovely photos C !

Such a fine grained cupcake, C! I'm not usually a fan of cupcakes, but those definitely look tempting. Love the dollop of lemon curd in the middle!

A lot of lateral thinking going on here, C, around the original idea! The end result looks worth it though - delicious.

You know I love Sainsbury's lemon cupcakes with the oozing centre but I could certainly make these myself - thanks for this!

Rhyleysgranny - I was surprised it was only 12% lemon oil!

Maggie - I'm too lazy and disorganised to make my own lemon curd. I bet yours tasted amazing even if it wasn't quite thick enough.

CC - yes, that last one is definitely the money shot isn't it!

CHFG - mmmm, lemon curd! I'd forgotten how nice it is!

Joanna - thank you! Well, the baker has to have some perks!

Celia - they were very fine grained indeed - that's the cream I think. The lemon curd was a good addition!

Suelle - not so much thinking, more laziness - I didn't want to go to the shops for oranges or make my own filling, so just used what I had! Worked out well though!

Jay - thank you for visiting and commenting, I'll have to check your blog out!

Do not feed the animals - yes, you definitely could! I haven't tried the Sainsburys cupcakes you mention though.

My idea of heaven! I've tried a lot of dishes with the pure lemon and orange oil in them, but I have never used it myself. It's wonderful stuff!