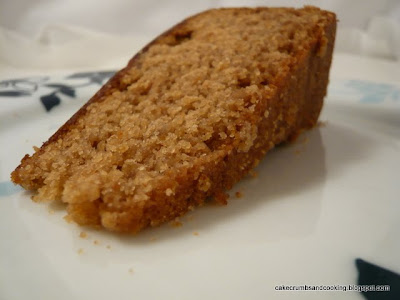 This recipe has a slight confession attached. When I was Christmas shopping last year I was rather disorganised and bought presents without people in mind. Present first, recipient later approach (this is an expensive, rubbish approach and I'm not doing it next year - I always end up with presents left over that aren't appropriate for any of my recipients...). Anyway, I could tell you that the book that this recipe came from was one of those leftover presents. And in a way, it was. But truthfully, I saw the book, thought that I'd love to have it, but if I could give it as a Christmas present I would. And so I justified the purchase of another, unnecessary, cookery book for myself. Please tell me I'm not alone (if you even understood what I was saying there!) 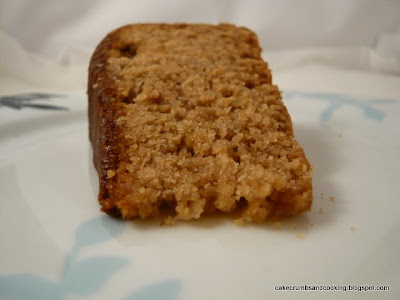 Anyhow, the book in question is The National Trust Teatime Baking Book by Jane Pettigrew and it's full of lovely, old fashioned recipes - none of your cupcakes with buttercream frosting piled a mile high here thank-you-very-much. Instead, recipes for such delights as Boxty Bread, Barm Brack, Kentish Huffkins, Singin' Hinny, Secretary Tarts, Boodle Cake and a whole host of other delicious cakes, breads, biscuits and so forth. Don't the names make you just want to whip them up as soon as possible? 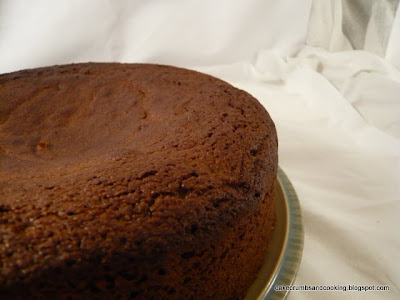 In fact, probably the only thing holding me back from making more of the recipes in here is the lack of pictures. There are some pictures in my version of the book, but not every recipe is illustrated and I tend to like to know what I'm aiming for. But a jar of marmalade prompted me to search for a suitable cake in which to include it, and this is what I came across. The recipe can also be found online here or here.

Method
- Preheat the oven to gas 4/180C. Grease and line an 8"/20cm deep round cake tin.
- Cream the butter and sugar until light and fluffy. Add the syrup and beat again.
- Add the marmalade and beat in, then add the eggs, flour, baking powder and ginger.
- Beat to combine then add the apple/orange juice and stir in to achieve a soft, dropping consistency.
- Spoon into the prepared tin and bake for about an hour until a skewer inserted comes out clean.
- Leave to cool for 15 minutes or so before turning out to cool completely on a wire rack.

The notes with the recipe say that the cake would go well with Ceylon or Assam tea. I assume you wouldn't want anything too delicate due to the bitterness provided by the marmalade. 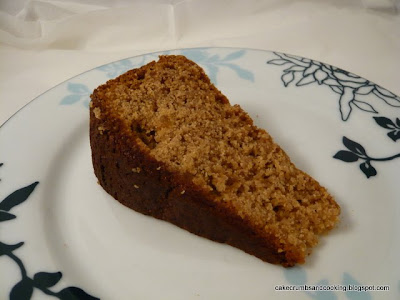 This was such a tasty cake. I wish I had used my own homemade marmalade though, which is more bitter than the bought version I used. The marmalade could be tasted, but was quite subtle and I think my own would have been better. The ginger wasn't really obvious and I'm pleased to have found another cake that works really well with wholemeal flour. The crumb was so soft and moist and crumbled beautifully when you ate it. Just delicious, I can imagine the inhabitants of Kedleston Hall partaking of this cake in the middle of the afternoon, seated on the rolling lawns and sipping tea from delicate china cups and saucers. Or perhaps retiring to the drawing room to prevent the ladies from being exposed to the sun. You can read a brief history of Kedleston Hall here, on the National Trust website. The National Trust are now looking after this imposing looking Hall, and having discovered that it's not too far from me I'd really like to visit now!
Posted by Caroline at 16:45

Yum - the cake looks a super texture.
I have that book - I love the traditional recipes. I also totally understand the present buying - I take a different approach and for every 2/3 pressies purchased make sure I get one for me...just to balance things out!

Mmm, that looks like good old traditional cake! I'm with you on disliking a lack of photos - I hardly ever make recipes that don't have pictures. Thanks for the drizzling tips too by the way :)

Some recipe books whisper to you from their shop shelves. Trying to entice you with their pages of deliciousness. Sometimes the whisperings get too much and you just have to buy. It's not your fault C, it's the books!
I was thinking about a marmalade cake, seems fitting with cooler weather here for us. Thanks :-)

This looks an interesting cake - it has a lovely colour and texture. Best to save your homemade marmalade for toast, I think, where the flavour is even more important

What a brilliant sounding book- I'd love to hear the recipe for 'secretary's tart'! The cake looks delicious- fantastic pictures.

That cake sounds just my affair. And I may have to get the book!

I love the names of those old fashioned cakes, not heard of any of them before!! And yes I have also bought, and ended up keeping several 'gifts' ;-)

I bought some wholemeal plain flour the other day for another recipe, so am pleased to see your cake recipe with it in, will just up the baking powder quantity and hope it works! I really like the bitterness of marmelade in cakes and will definitely try this one out, looks delicious!

I'm very intrigued at this recipe as Kedleston Hall is one of my local NT properties and we often visit. If you do get a chance to go certainly visit. In the cellars of the property there is the most stunning dress covered in peacock feathers made from millions of beads. Stunning. It's a grand place and has featured in The Duchess and Pride & Prejudice.

Another marmalade cake, hooray! The National Trust book sounds brilliant and your cake looks majestic. I may try this one out soon, as I have a bag of wholemeal SRF lurking in the cupboard that needs using up.

I'm a member of the National Trust and their cookbooks are wonderful. This marmalade cake sounds and looks very yummy!

No, you are not alone C. I do try to resist buying more cookery books, but it is sooooo hard ;-) Your cake looks good and sounds very tasty. I've suddenly got into marmalade cakes. having never used it in baking before I've now done two in quick succession.