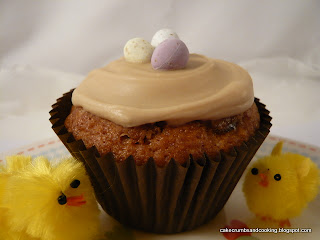 A final Easter bake here, and then I'll try and move on... When I spotted that Dan Lepard had written a blog post for the BBC Food blog here, all about cupcakes for Easter this year, and leaving baking to the last minute, I thought that it was definitely a sign that I should investigate these recipes further!
I've already made two chocolatey treats for Easter this year, both of which were very well received, so I was glad to see that the choices that Dan gives are for Carrot Cupcakes (which look very tasty!), Simnel Cupcakes (no good for me...) and finally Easter 'bun' cupcakes. These last ones were the ones I opted to make. 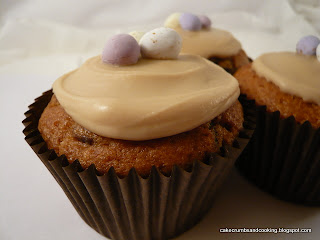 I have to admit to being glad that I have a fair amount of cake baking experience behind me though. When I looked at the recipe my guess was that a four egg mixture would never fit into 12 cupcakes cases, and given that the pictures you see are of the twelve cupcakes I made using 3/4 of the specified mixture, I think I was right!
The amounts I used are given below. I also found that at 25 minutes the batter was still raw in the middle, so I added another 8-10 minutes to the cooking time, after which the cupcakes were done. I also chose to add a glace icing rather than a cross and used unrefined icing sugar to give the caramelly appearance you see in the pictures. I quite like this unrefined icing sugar, yes, it is still very sweet, but there are undertones of other flavours there too, which makes it more interesting.
Easter Light Fruit Cupcakes
Ingredients
75g butter
1 1/2tsp ground ginger
1 1/2tsp mixed spice
185g sugar
60ml oil (I used sunflower)
3 eggs
approx 75g eating apple
75g crystallised stem ginger
75g currants
75g dried cranberries
225g plain flour
1 1/2 tsp baking powder


I followed Dan's method as given here, but baked for longer, as mentioned above. I also decided to replace the specified mixed dried fruit with dried cranberries, because I like them, and because I have quite a few packets in my storecupboard at the moment! 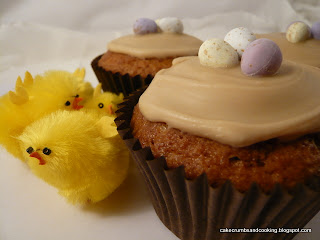 These were a lovely moist cupcake, really easy to make, and definitely a light fruit cake rather than a hot cross bun type texture. Delicious for Easter, but also good for any time of the year when you want a substantial cupcake - these were not a light and airy confection, but packed a great flavour of spice, ginger and dried fruit, complemented by the sweet icing on top. There were lots of interesting textures and tastes here - one mouthful hot and gingery, then next sweet tart cranberry. Delicious. In fact, they would be a great recipe to make for wedding cupcakes if you wanted to go non-traditional and have lots of mini cakes rather than one big one - perfect portion control! 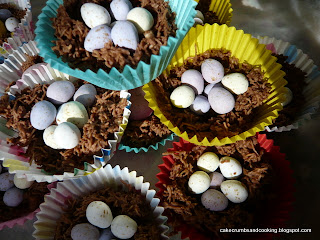 And finally, what would Easter be without crispy nest cakes. You don't need a recipe for these - melt chocolate of choice (these are Dairy Milk for the children), mix in crushed Shredded Wheat (aka straw mattresses in our family - I always use the full size ones, as I think you'd get too many edge/crispy bits from mini ones but I end up with half a packet of nasty Shredded Wheat to eat up - any recipe ideas other than more nests?) and form nests. Fill with eggs. The ones above are filled with micro eggs, something I spotted in Tesco, but actually, Cadbury's mini eggs taste oh so much nicer - I shall revert to those in future years. When you're making Easter nests which cereal do you use? Rice Krispies? Cornflakes? Shredded Wheat? Let me know in the comments!
Posted by Caroline at 20:00

I know exactly what you mean - I feel I need to be weaned off Easter and Royal Wedding baking too! I feel quite sad that all these great events to bake for are over! The cupcakes look great, a lovely twist on more usual style of cupcake. I'd seen the recipe also-glad they turned out very well! Thank you for the ingredient and timing notes also
Kate

Love the look and sound of these cupcakes with all the different flavours!

Kate - I feel I ought to point out if I've done something different to what the recipe specifies, especially if I think it'll help other people!