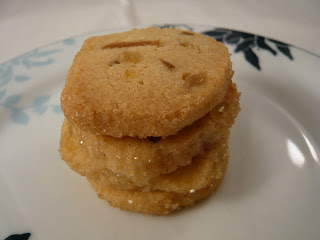 I've been meaning to make these for ages now, the combination of bitter marmalade, chewy peel and crunchy sugar against the background of a buttery melting biscuit was irresistible. Hmm, how did I manage to wait so long to make them?
It was partly thanks to Foodycat for bumping the thread discussing these little biscuits on Dan's forums that reminded me of their existence, in combination with an inventory of the cupboards that revealed more marmalade than one person can reasonably be expected to consume in a lifetime... ok, I exaggerate slightly but you get the picture. For this batch of buttons I chose 'Three fruit marmalade' boasting lemons, oranges and grapefruit. I complemented this by choosing lemon and orange peel to cut up. This would be my only proviso for making these; chopped mixed peel is bitter and nasty, mixed peel that you chop yourself is chewy and citrussy and sweet and delicious. It's more than worth the stickiness and time (little) that you will expend to chop your own peel for a far superior result. You know you want to... 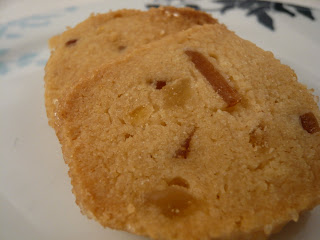 I made the recipe exactly as specified here and used semolina rather than ground rice, because my semolina was open and the ground rice wasn't. Mine took 20 minutes to become golden brown. There are a few links to other people who've made them on the link above and Foodycat's version is here. 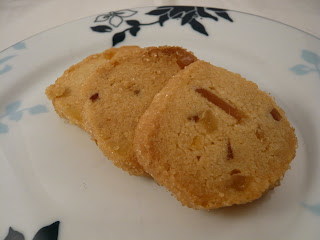 Were they worth the wait? Yes and no. They were delicious - buttery and crumbly, with a good orangey flavour from the marmalade and peel. But they were a little soft for my taste - I prefer my biscuits with more crunch than these gave. I don't feel that I could have cooked them any more though, as the more well-done ones were verging on overdone. However, I really did like the peel in them and the marmalade, so I might try applying this to a different base biscuit recipe. I was also quite pleased with the crunchy demerara crust. I have a feeling that this would have been even more successful if I'd read the instructions in the recipe that say to wet the dough log before adding the sugar to help it stick. D'oh!
Colleagues were pleased but I'll have to experiment further to find my favourite biscuit.
Posted by Caroline at 20:45

C, I'm not a big fan of marmalade - do you think these would work with jam? I have a house full of homemade jam...

Love the nam e- how can anyone resist?

I love marmalade and these not only sound cute but look gorg!

Celia - I'm not sure if these would work with jam to be honest, I think there's something about the contrast between chewy, slightly bitter peel and crumbly, buttery biscuit that makes them successful. They don't actually use that much marmalade, and the majority of the bits are peel. If you decide to give jam a try I'd love to know if it works!

Maria - these are indeed great for a marmalade lover!

I think I loved these so much because they are a softer, shortbready style of biscuit. I wonder if you could adapt a gingernut sort of recipe to include marmalade for a crunchier finish?

Foodycat - I think I must prefer my shortbread with a little more crunch then. These weren't bad, just a little too crumbly for my taste. Perhaps I'll have to try them again and see what I think again.....

I totally agree - I too like my biscuit to have some crunch and increasingly find that recipes make softer biccies. It needs to be dunkable!
They look very pretty thought with the shredded fruit in the dough.

Lovely flavour combination there - quite unusual.

Firstly I'm intrigued by the name of these in a childish kind of way, was imagining all sorts in my head, almost didn't expect it to be biscuit like, they do look delicious though!

Also I seem to have a cupboard full of different marmelades too so would be handy to use them up, only so much toast a girl can eat!