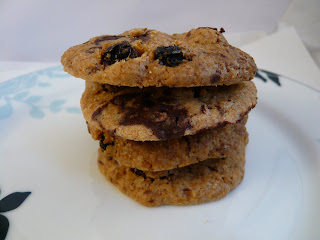 These cookies are from another relatively recent acquisition, the Popina Book of Baking, which is stuffed full of markers for recipes I really want to make, both sweet and savoury (which is quite unusual for me!). I was intruiged by the use of wholemeal spelt flour in this recipe, having fairly recently made this wholemeal honey cake with great success, and I wanted to know how it would work in a cookie too.
Unfortunately I can't find the recipe online anywhere to share with you, but if you would really like it, get in touch via e-mail and I'll type it out. You can read more about the Popina bakery on their website here. 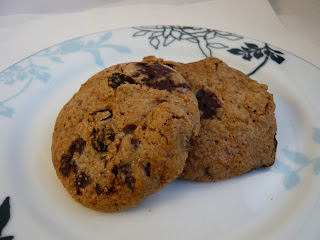 These cookies suffered slightly from my tendency to overbake, but not to the degree where they were inedible. They were quite a crisp cookie, rather than chewy, which is probably partly down to my cooking time. The dark chocolate was a good contrast to the sweet biscuit and the raisins were nice and chewy. They went down well at work, but a couple of people commented that they preferred Dan Lepard's Blueberry and chocolate chip cookies, and I have to say that I agreed with them. These were definitely more crunchy - different but lovely too.


Changes to the recipe (to jog my memory) - instead of hazelnuts I used raisins and I made more than the specified 17 from the amount in the recipe. They did spread quite a bit in the oven, so leave space between them.
Posted by Caroline at 07:00

They look really tasty - I would never have thought of adding spelt to a cookie dough.