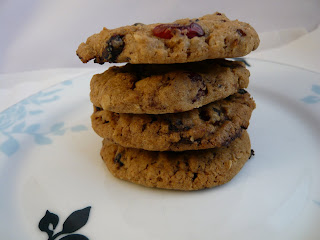 Another fabulous recipe from Dan Lepard. Lots of people seem to have been baking these; Celia, Suelle, Joanna and many more I'm sure, so I thought I'd better jump on the bandwagon too. If all these lovely people thought they were good, they must be right! (N.B. This does not follow where garlic is concerned - the whole population of the world might love the stuff but it still won't persuade me to like it... anyway, going off at a bit of a tangent there...) 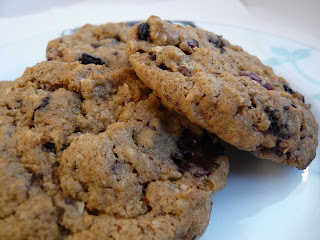 I stuck to the recipe pretty much as it is printed here, except for substituting half of the dried blueberries for cranberries (I already had cranberries, and had to buy blueberries, making them seem more expensive!). I used 70% cocoa chocolate (and used 140g), and chopped it up myself rather than use chocolate chips as I haven't found a source of 70% cocoa chocolate chips. Plus I substituted vanilla extract for the almond, for obvious reasons! 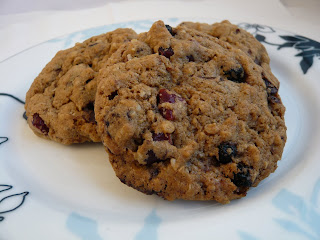 I don't often make cookies, and I tend to over-bake them when I do, but I managed to keep these on the lighter side of charcoal! Perhaps I should try more often though, because these were really good. The recipe is definitely a keeper and I'm glad I jumped on the bandwagon!!! They've got a lovely chewy centre and the chewiness is enhanced by the oats and dried fruit too. I haven't had dried blueberries before, and even though it's going to sound stupid I'll say it anyway - they really do taste quite blueberry-ish! And wholemeal flour - these are surely good for you! Many positive comments from my colleagues confirmed my view that these are excellent!
Posted by Caroline at 20:45

Another person with cranberries in the cupboard! I have been eating mine on and off all day trying to persuade myself that they are healthy - yours look just great :)

Welcome to Dan's cookie gang! LOL! I'm going to buy some blueberries for next time, as they are the same price as cherries. I only ended up with cherries because one of the local supermarkets was selling them 'reduced to clear' as they were getting near the best before date.

These look yummy and I love how they border on healthy with the oats and wholemeal flour. I know what you mean about the blueberries, they really pack a blueberry flavour!

I was thinking about needing to try a choc chip cookie recipe just today - this looks most interesting and I think dried blueberries would go down well in our household! Always love hearing about dan lepard recipes from uk bloggers - am becoming a fan of his through hearing how much he is loved by the home cooks!

How on earth have these little bablies passed me by before now. Can't wait to give this a try.

C, I wonder if anyone actually made these with blueberries? Yours look wonderful, and I can't stop eating them either - had to make another batch today! :)

Oops, sorry, misread your post (I can't find my reading glasses at the moment, so the screen's a bit of a blur) - realised you used a mix of cranberries and blueberries..