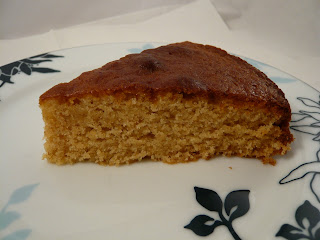 Another purchase from my trip to Little Salkeld water mill was some 85% wholemeal flour. This (as far as I understand) is wholemeal flour that has had a first sifting which removes around 15% of the weight, i.e. the coarsest bran. So it is a wholemeal flour, but slightly lighter. It is sold as suitable for cakes and bread and I was interested to see whether a cake made with wholemeal flour could still be light, or would turn out heavy and 'worthy' which isn't really something I aim for in my baked goods!
I was flicking through Hugh Fearnley-Whittingstall's 'River Cottage Everyday' book and he features a cake made with wholemeal flour and honey. I subsequently ignored his recipe (which served 10, used 4 eggs and ground almonds) which is undoubtably lovely, and made up my own. But thanks are due to HF-W for seeding the idea! I used the yogurt simply because I had it lying around, and thought that it might help to add to the moistness of the cake.
Wholemeal honey cake
Ingredients
100g soft butter
50g golden caster sugar
65g mild honey
120g wholemeal 85% flour
2 eggs
about 20g natural yogurt
1tsp baking powder
Method
- Preheat the oven to gas 4/180C. Grease and base line an 8"/20cm round cake tin. Mine had a loose base too.
- Cream the butter, sugar and honey until light and fluffy.
- Add the eggs and yogurt, and sift in the flour and baking powder. I don't often bother sifting my flour for cakes (yes, I am that lazy) but this time I wanted to air the flour and make sure there were no lumps, and to distribute the baking powder more evenly.
- Mix until combined.
- Spoon into the prepared tin and level off.
- Bake for 30 minutes until light golden brown and springy to the touch.
- Remove from the oven and allow to cool on a wire baking rack.

I was going to serve this with a scoop of icecream and some blueberry compote, but I didn't get round to it, so ended up eating it plain for lunch. And because I had a bit of a marathon baking session at the weekend, I didn't eat this until a couple of days later. I was a little concerned that it might have dried out a bit, especially as I cut it on Sunday ready to eat and Victoria sponge type cakes are generally better fresher. However, I think the honey in this cake actually made it moister and stickier over the course of a couple of days because it was deliciously moist and there was a gorgeous stickiness present on both the top and bottom surfaces of the cake. 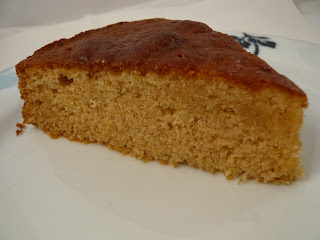 This may appear to be a bit of a plain jane type of cake, but don't be deceived, I would absolutely make this again in a flash, and no doubt will be doing. And just think, all the fibre in the flour will be doing you the world of good, without tasting in the slightest bit 'worthy'. I honestly thought that this cake would end up being a little dry, perhaps tasting a little too 'wheaty' and being heavy and dense and a chore to eat. Instead I was pleasantly surprised that I ended up with something quite so delicious. The honey flavour came through well, subtle because I'd chosen a subtle honey, so pick your favourite and enjoy the flavour!
Posted by Caroline at 19:45

This looks a delicious cake - perfect with a cup of tea. Lucie x

Hehe - your post has made me laugh. Looks great, full credit to you for having the ability to produce a cake and its recipe from scratch! Wish I had that talent.

Jose manuel - sorry, I can't understand your comment but thank you for taking the time to read and comment!!!

Johanna - I was thinking how gorgeous your honey yogurt and choc chip cake looked when I read about it. Honey is such a wonderful product.

Chele - thanks! And your cakes always look lovely. I wish I had your cake decorating talent!!!

I think the last bit of Jose's post is asking for permission to copy the recipe...

Is 120g flour right? It looks like the sort of cake my husband would really like! Very plain and delicious.

Foodycat - yep, that was my guess at the last bit, it was the first bit that had me confused (and babelfish didn't help!).

120g flour is what I used - were you expecting more or less? I based the recipe on a standard victoria sponge 2/4/4/4 but used slightly less butter (as I was running out and had done lots of baking that day and was slightly concerned as to how much butter I was likely to consume!) and the honey/sugar was supposed to be 50g each, but more honey came off the spoon so that was that! Let me know how you get on if you make it.

I am mildly obsessed with honey cake at the moment - this looks a cracker!