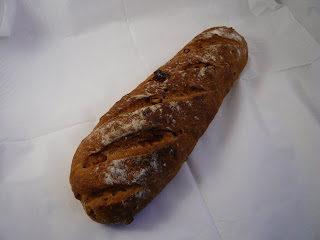 When this recipe was published last weekend in the Guardian I thought it looked really interesting, but (said in a small voice) I didn't dare make it. Why? Because I'm a complete chilli wuss. I don't ever eat them and I can't do with food that bites back. But I know that most people quite like chillies and the recipe looked good so when I found that I was due to see T (doesn't happen as often as I'd like) and that I could also see J the same weekend, I decided to give this a go, so that I could share the results. T likes chilli much more than I do!!! 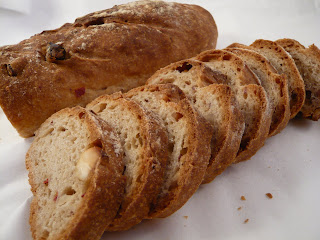 Because I didn't have chance to get to the shops I used what I had on hand, resulting in some minor changes to the recipe as published here. I used 100g peanut butter (50g smooth, 50g crunchy) and 50g of cashew nuts instead of the roasted peanuts. I also only used one chilli and scraped out the seeds. Next time I might be braver and use two! I also missed out the cumin seeds firstly because I don't have any, which is probably due to two, I dislike them intensely!

I followed the method as written, which is great because it requires very little work on my part, only one brief kneading and I managed to make it after getting in from work in the evening at 7pm (I just won't tell you what time I got to bed that night!). I was pleased with the way it turned out and rather relieved to find that the chilli wasn't prominent at all (in fact, I can barely taste it) with the taste being predominantly nutty. So that second chilli would be necessary really. I think I also chose the mildest chillies the supermarket had! J enjoyed it, but I haven't asked T what he thought yet - I'll update when I know. 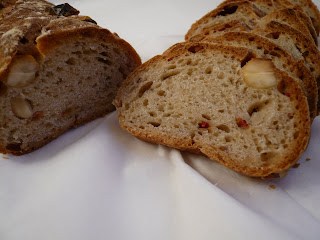 I was going to suggest cream cheese to soothe the heat of the chilli, but the heat doesn't need soothing! I still think cream cheese would be a good partner, or a creamy goats cheese perhaps if you don't like Dan's recommendation of cured meats to eat with this.
Posted by Caroline at 11:54

Love the sound of this bread - wonderful flavour combo and I would never of thought of using peanut butter as an ingredient in the bread, generally just smeared over the top. And chilli too! YUM

This looks great, I didn't try it so it's lovely to see yours!

C, I made this recently as well, only I sub'ed a little chipotle powder for the roasted chillies. We loved it with cheese. I thought you were nut allergic though?

Chele - I wouldn't have thought of putting peanut butter in bread either - that's why I like Dan Lepard's recipes so much, they're really unusual!

Celia - chipotle powder sounds like a good idea. Yes, I am allergic to nuts, but I'm fine with peanuts (which are groundnuts) and cashews, as neither are true nuts. I suspect I'm probably ok with coconut too, but have never tried it!

Johanna - Glad to know I'm not the only chilli wuss! Although having spoken to T, he said the flavour of chilli was there, but not the heat. I haven't eaten much of it yet, it's stored safely in the freezer, but next time I have some I'll see if I can pick out the chilli flavour!