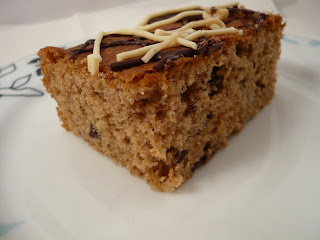 A cake of forgetfulness and disorganisation really, this one. Disorganisation because last weekend I found myself with quite a lot of eggs to use up due to bad planning and over-buying. So I needed a cake that required quite a large number of eggs yet was still simple to bake and transport to work. There are limitations imposed on me by a 40 minute bus journey and 20 minutes of walking that mean the fancier, more decorated cakes that I sometimes feel like making just aren't practical. After all, there's no point in setting out with a beautifully decorated creation only for it to resemble a car crash by the time it's bumped its way to work. Although I like to think that taste is the most important thing, I know from experience that my colleagues prefer their cakes to look at least halfway attractive before consuming them.
So I settled on the idea of a traybake and recalled that in a recent issue of BBC Good Food magazine (the August 2010 issue), there was a 'Bake it easy' feature where the deputy food editor, Sarah Cook, had given base recipes for a loaf cake, biscuit, traybake and slice, to be adapted three ways in each case. One of these was for a cappuccino cake. I'm not the world's biggest fan of coffee, but I think I am coming round to the flavour on the odd occasion, having enjoyed a couple of cappuccinos on holiday recently in Italy, so I thought a light coffee flavour would be good, and chocolate is always good so potentially a great cake. Now for the disorganisation kicking in again..... I didn't have any coffee in the house, so that idea was put to one side. Never mind, thought I, a chocolate and vanilla cake will be just as nice. Which it would have been if I'd remembered to add the vanilla before spooning the mixture into the tin..... sigh. So this was a plain chocolate cake. Still good though!
I followed the recipe given here, with the following changes:
I only had 220g soft butter, so just used that. I only had 100g yogurt rather than 150g (I used full fat natural yogurt). I added 75g finely chopped dark chocolate to the batter to give a speckled appearance to the cake but as mentioned above, left out the coffee and vanilla. I creamed the butter and sugar first, added the eggs, yogurt, flour, baking powder and cocoa powder and mixed well. I then added my chopped chocolate and mixed in before transferring to the lined baking tray. 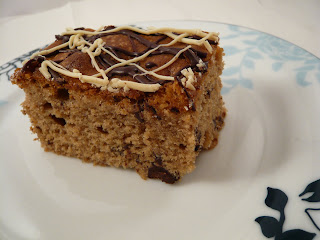 For the topping I melted 30g each (I think next time I'd only use 20-25g, you need a surprisingly small amount) of white and dark (72%) chocolate and piped it on. In the spirit of laziness I actually melted the chocolate in small plastic food bags (J's idea!) to save on washing up because I would be spooning the mixture into these bags anyway to drizzle onto the cake. This worked really, really well for the dark chocolate which is quite runny when melted, but much less successfully for the white chocolate (I used Green and Blacks here) which was much thicker when melted. I tried to pipe it using the food bag, but it split and splodged out. I ended up using a disposable piping bag, which is much stronger plastic, and this worked really well. The topping was very fragile (as I knew it would be) when the chocolate set, but it was still nice to have a contrasting texture when eating the cake.

Taste? Well, compliments from colleagues so that's good. I thought the texture of the cake was great - it was very light and moist and it was nice to have the little pieces of dark chocolate in the cake providing a slight contrast and also a more intense hit of chocolate. Because the cake was supposed to be cappuccino, the chocolate flavour was very subtle and it wasn't an intense chocolatey chocolate cake, if you get my drift, but it was good all the same. I would use the base recipe again but change the flavourings. You can find all of the recipes for the cakes, biscuits and slices in the August issue of BBC Good Food available online.
Posted by Caroline at 10:15

That is one good looking piece of cake. I'm sure the work gang will have no complaints - and if they do send me a slice instead ;0)

Looks very light to me.

I love understated cakes like this! They are usually the ones that are the biggest surprise in flavour and go perfectly with a cup of tea!

Chele - sadly the work gang have snaffled the lot otherwise I'd send you a piece ;-)

Liz - it's an everyday cake - you need to have a piece everyday with your tea! Seriously though, it's lovely to have a little treat without feeling like you're going ott with a huge slab of cake smothered in rich icing, so cakes like this are great sometimes!