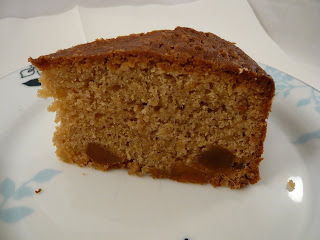 How can such an unassuming cake taste so delicious? This is definitely not a cake that's going to win any prizes in the looks department, but seriously - what it lacks in appearance it more than makes up for in flavour and texture. I suppose I could have decorated it, but I wasn't sure what type of icing would complement it - a simple glace water icing made with ginger syrup might have been good, but it doesn't need it.
The original recipe came from a recent issue of the Waitrose magazine (which I'm buying at the moment because it's only £1 and I just can't resist!). It's a recipe for a ginger and apple simnel cake, but I've missed that boat for this year and I can't eat marzipan anyway, so it didn't seem a hardship to miss off the marzipan. Add it if you're a fan by all means. 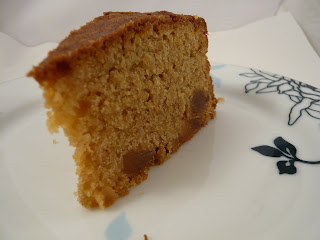 Apart from leaving off the marzipan I made only a couple of minor changes to the recipe - I only had 280g light muscovado sugar left rather than 300g, I only used 125g crystallised stem ginger because that was the size of my packet of that (although next time I'd add more probably - it baked into a luscious sticky chewiness and even though pretty much all of the ginger sank to the bottom of the cake this didn't matter because it meant that you got a lovely gingery 'hit' in some mouthfuls to contrast with the gloriously buttery sweet soft cake of the other mouthfuls).
The other change I made which I was actually really pleased with was to use an eating apple instead of a cooking apple. When it came to grating it, I decided that instead of using the coarse side of my box grater, I would grate the apple on my Microplane grater. This meant that rather than being distinct pieces the apple was essentially pulp, which I think must have contributed to the gorgeous moist texture of the cake. It also got rid of a rather large slightly mealy apple that was sitting in the fridge and on my conscience!

NB That's not my box grater, but it's similar in style! The microplane grater is sold as coarse, but it isn't really - it produces mush!!! 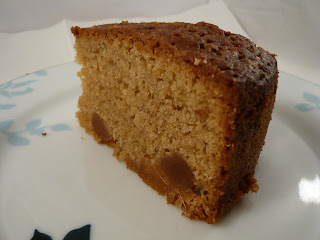 I just can't say strongly enough how delcious this was for a ginger lover - the cake was moist and rich and sticky and gingery and just fabulous! Have I said enough? Make it, you won't regret it. Everyone else loved it too - apart from those on diets who had to resist.... mean? am I ever!!!
Posted by Caroline at 18:50

It's got sticky in the title - Im sold!

Apple and ginger, two of my all time favourite cake flaours! This one looks fab, I love how moist and sticky it looks. Added to my 'must bake' list :)

I love love love ginger. I also love it when food tastes so much better than it looks - cos its far worse when it's the other way around!

What a great combination of flavours! I agree that a ginger glace icing would be nice, if unnecessary.

Ginger and sticky certainly does it for me and the addition of apple sounds good too. It doesn't sound as though it needs any additional icing at all - it might even detract.

I am a ginger fiend, so this really is the recipe for me! Thanks C.. :)

You had me at "sticky". Sounds a lovely combination. If the ginger sinks you can always serve it upside down and claim that's how it's meant to be!

Oh man that looks good! I just need a cup of tea to go with it.