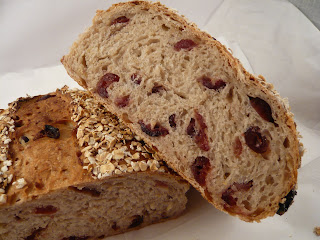 It seems like a while since I last posted bread, well, apart from these hot cross buns. Recently I've mostly been eating this bread, and variations (additions have included olives, roasted peppers and roasted halved cherry tomatoes) of this bread. All very delicious, but when I spotted Dan Lepard's most recent recipe in the Guardian last Saturday I decided it was time for a change. 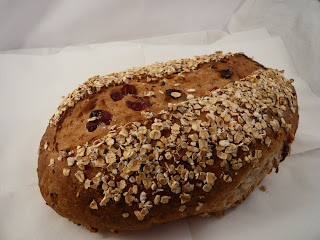 I did actually stick pretty closely to his recipe (find the recipe posted on his forums here) but since there's only me eating this, and because my freezer is about to explode with all the items in there, and given the final factor that I also needed a more savoury bread for lunchtime sandwiches, I decided to halve the recipe. It worked well (who'd have guessed?!!!). The minor changes I made were to add the butter to the soaking mixture to avoid having to rub it in (bad, lazy person!) and to use the zest of half a lemon rather than an orange, lemons were present, oranges sadly lacking in my house.
But coming back to the bread for lunchtime sandwiches. I still fancied the idea of using the soaked oats technique, so I used that for my normal (no additions) bread too. The other change I made for the plain loaf was to use half strong white flour and half soft/plain white flour, as I've found that this gives me a closer crumb, and I prefer this. Unsurprisingly the two loaves look very similar.... 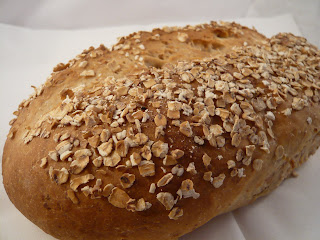 However, the cranberry version did catch (very slightly, and in no way approached burnt!) more than the plain, just as Dan said it would. I baked the loaves for 10 mins at Gas 7 (210C), 15 minutes at Gas 6 (200C) and a further 10 minutes at Gas 6 upside down to brown the bases of the loaves, my usual technique. I was really impressed with the texture of the bread - it's more substantial than the bread I usually make and the toasty oats on the top of the bread, combined with the oats in the loaf give it a lovely slightly chewy texture. You can see from the crumb shot that the oats aren't visible in the final loaf, but their presence is felt by the chewiness and they lend a lovely oaty taste too (again, unsurprisingly!!!). Definitely a good all purpose adaptable bread recipe, thanks Dan. 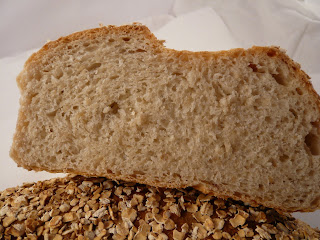 This looks wonderful - I love the addition of Cranberries. Great post. Lucie x

This does look wonderful and the cranberries must add a lovely fruity touch.

Mmmmmmm - must make some of the cranberry bread so I cantoast it for brekkie! Looks fantastic C.

I'm so pleased this recipe worked well - it's one I have noted to try soon, even though I don't often attempt to bake bread.

They look great ! Very pleased to see your plain version too. Just bought a bag of oats so this might be tomorrow's bread :)

These both look great and I can imagine the oats would give quite a chewy texture - yum yum. I generally prefer my bread savoury as it's more versatile that way, but it does look very good with the cranberries in.

I'm really into cranberries in both sweet and savoury dishes at the moment - your bread is a triumph!

Thanks for all the comments.

Celia - love the little ditty, he really is a clever man isn't he!

The cranberry version really is very good - it's my breakfast bread at the moment and is lovely spread with a little butter. I've just made the plain version again - it's got a lovely chewy texture and a good (fairly neutral) flavour and is perfect for sandwiches, especially when you don't want them to fall apart or get squashed on the way to work!

I've used a recipe that has soaked oats a few times - I really like it! Your loaves look perfect!

love that bread - have been thinking about oats in bread lately and love the sound of soaked oats - tried dan's kneading method with my friend a few weeks ago and the bread was very good so must try this one - except I am out of cranberries!

Suelle - I really would recommend this bread. It feels like a real treat to eat - almost as good as cake, but without any of the sugar!

I've made the plain version a couple of times since, and it's very good. Planning on making the cranberry version again too, I enjoyed having it for breakfast so much!