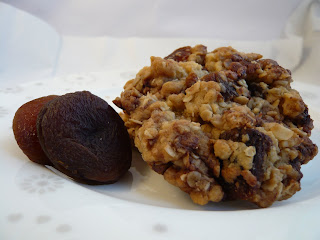 It's an unsulphured dried apricot, just in case you were wondering....
Mostly my baking is planned. Not very well planned, I'm the first to admit, but there is usually a little forethought to what I'm making. Sometimes, though, it's just spontaneous. I was about to take a cake out of the oven, and had just enough time before needing to cook my dinner to fit in another simple, quick to bake recipe. And that's where these little biscuits come in. They aren't posh or particularly photogenic, but they are easy and quick to make, and taste good, which is what it's all about after all. (You could even pretend they're healthy, what with the oats and all, but no, no they're not...)


One of the nicest things about this recipe is the way it lends itself to variations so well. The recipe is Delia's originally, but once you've added what you fancy, it becomes your own. Delia suggests chocolate almond, apricot pecan, cherry flaked almond, and raisin hazelnut but I wanted dried apricots and dark chocolate (and for once, my colleagues had dark rather than milk chocolate, because these biscuits were all about pleasing myself, not someone else!). The recipe was published in Delia Smith's How to Cook, Book 1 (a lady after my own heart; biscuits and cakes get a chapter in the first book of the series, meat and fish etc. have to wait until later!!!)


As I followed the recipe faithfully (not often I can say that!) I will just give a link to the online version on Delia's website. I used 50g chopped dark chocolate, and 50g chopped unsulphured apricots, omitted the mixed spice and didn't bother with the topping. I would advise letting the mixture cool a little before addding the chocolate because mine mostly melted, and it would have been nice to have chunks of chocolate in the biscuit. 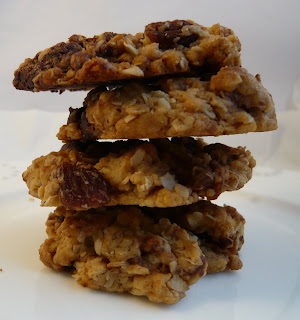 I loved them, colleagues loved them, what more is there to say?
Posted by Caroline at 17:30

These look great and I love apricots. Definitely a must try.

Always good to see something a bit different - I love the sound (and look) of these :)

They look pretty good to me. I'm generally not a Delia fan but this might help convert me ;0)

mmm chocolate and apricot - I have been caught out by not letting mixture cool before adding chocolate - but I am impatient like that - good reminder to be cool about it! ha ha

These look wonderful and I bet the unsuphured apricots added a great flavour. I love all oaty things. Good old Delia

They look delicious! I think apricot and chocolate is an underrated combination.