Fresh from the oven - No kneading required 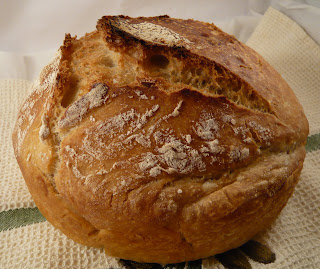 Apologies to my fellow bakers at Fresh from the oven for missing the past couple of months baking. I can't eat marzipan, so although I admired the stollen that others baked from afar, I wasn't really motivated to make it as I can't eat it. And I just ran out of time last month. But that's all in the past - this month I've been organised enough to make this no-knead bread. This month's host is Claire over at Things we make - she has a lovely blog which I suggest you go and browse! She chose no-knead bread for this months challenge, based on the original recipe published in the New York Times a while ago that has been circulating around blogs ever since. I had heard of it before, but lacking the Le Creuset cast iron pot deemed necessary for the baking, I had avoided the recipe. However, I needed to rise to the challenge set by the group and so although I still don't have a Le Creuset I do have a different option....more later. 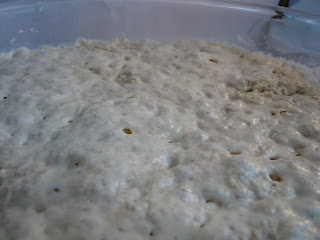 This recipe really is very easy to put together, and as Claire has given such good instructions I won't reproduce them here, but suggest you visit her post about it, here.
I have to admit that I was tempted to keep messing with the dough - it seemed very alien to me to just leave it to do its own thing for all that time. It wasn't the easiest of doughs to work with when it came to mixing it after 16 hours (the picture above is the fermentation after 16 hours, mmmm, bubbly!), and required a fair bit of flour to lubricate it and release it from the bowl, plus a very sticky scraper. I also had a little difficulty in transfering it to the cooking pot - it didn't want to be parted from the bowl it had risen in. As mentioned before, I don't have a Le Creuset (or similar) cast iron pot, but I do have a stainless steel pan with a metal (rather than glass) lid, which is oven safe. So I decided to bake the bread in this, which actually worked really well, I was very relieved indeed when the bread turned out easily as I had been imagining a horrible stuck mess that I would have to extricate bit by bit and spend ages scrubbing my pan to get it clean again! The only drawback is that oiling the pan did leave marks after baking (unsurprising really) and because the bread filled the pan it was impossible to turn upside down to check for done-ness. I left mine to bake for probably about 15-20 minutes longer than specified to get the lovely golden crust you see here. 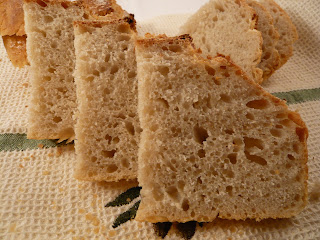 I found the bread quite difficult to slice and ended up with rather thick slices, but never mind! The bread itself was quite nice, but unfortunately, having to oil the pan to prevent it sticking meant that the base of the bread was slightly oily, which I found off-putting. I did eat it all though, so it can't have been too bad!
Great challenge, and one I'm glad I did, even if I won't repeat the bread any time soon. I think I'll stick to my usual sort of bread, but this made a nice change. I will try and remember to add a link to the roundup when it's published.

Email ThisBlogThis!Share to TwitterShare to FacebookShare to Pinterest
Labels: bread, events, Fresh from the oven, yeast

Looks great. It was such an easy recipe I think everyone has been really impressed by the results.

I too found it quite a difficult dough to work with - my cast iron pan is not quite the same now after baking it, took quite a bit of scrubbing to remove the residue oil etc. That said though I was very happy with the results. Maybe it does need a cast iron pan after all?

Your bread looks declicious. I haven't found time to participate for the last two months either.

Nothing wrong with thick slices of bread! Your loaf has a lovely texture to it - I'm impressed!

Hi, it looks lovely. I used a stainless steel pot with a lid and I didn't oil the pot. My bread still turned out wonderfully. It wasn't stuck to the pot in the slightest. I love the golden crust.

That's interesting, the other two posts I've seen on this were enthusing mightily.

You loaf looks smashing. I only added to oil the pan slightly as if you use a pan straight from the dishwasher (horrors!) it can stick. I tend to just wipe mine out between bakes, then you don't need to oil it at all. Glad you enjoyed it and thanks for your nice comments.

Your loaf looks great! The first time around I oiled the pan and found the loaf a bit greasy on the bottom, which was somewhat offputting. But the second time around I didn't use any oil and enjoyed the loaf a lot better. I also used a stainless steel pot as I don't have a cast iron one and it didn't stick at all without the oil.

It looks like you achieved a wonderful thick crisp crust - thats always something I find hard to do on homemade bread. Lovely looking texture too

But the thing is, I LIKE kneading! It's got a lovely-looking crumb.