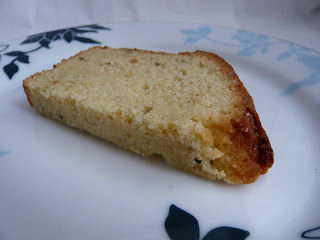 Sometimes I have a flick through cookery books that I've had for ages and ages, and suddenly a recipe that I've passed over for years and years appeals to me. So it was with this Nigella recipe. It's from How to be a Domestic Goddess, which was one of the earlier baking books I bought, when Amazon wasn't there to offer cut-price books (or if it was, it was in its infancy, and I didn't trust buying over the internet - oh the days of innocence and past!) and this was an expensive treat. Many a time I've looked through the pages, admiring the photography, imagining what the recipes would taste like. Don't get me wrong, I've cooked plenty from it too, but this recipe had always been overlooked. I did make the Madeira cake though, years and years ago. And I had problems. With hindsight, it was the oven because student houses never have great equipment. And it was my inexperience too. Now, however, I have an oven that I know and plenty more experience. It was time to repeat the recipe and forget the acrid smell that had been the result of a cascade of cake to the oven floor....... my head is hanging in shame.

So, did it work? Yes. I'm pleased and relieved to say that I had no problems whatsoever with the cake this time round. In fact, it's a rather majestic looking loaf cake, and I'm sorry that I didn't get a picture of it whole, before slicing. However, the slices show you the crumb and I'm sure you know what a loaf cake looks like! I'm talking about this cake and the Madeira cake as if they're one recipe. They aren't, and there are two separate entries in the book, but they are extremely similar, and given that Nigella has published the Madeira cake here on her website, but not the rosemary loaf cake, I'll just tell you how the recipes differ.

For the rosemary version:
Omit the zest and juice of the lemon specified for the original version. Add 1tsp vanilla extract, 2 tsp finely chopped fresh rosemary leaves just before the flour (you'll need about 2 4"/10cm stalks of rosemary) and 4 tbsp of milk where Nigella specifies lemon juice. That's it!

Nigella says the cake takes an hour to cook. Not for me it didn't. I ended up leaving it about an hour and a half, which wasn't a problem - the outside didn't burn, but be aware if you're trying to fit lots of baking into a session that this one will take longer than specified.

Taste test? This was fab. Really buttery and moist and the balance of the vanilla and rosemary flavours was lovely. I thought the rosemary was quite subtle, with perhaps more vanilla flavour, but it was really, really good. Colleagues agreed and it didn't last long. 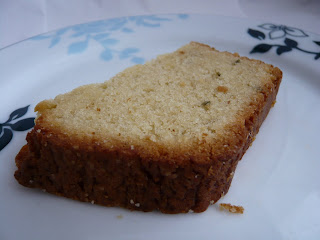 What an interesting flavour combo - looks deliciously moist too!

I have seen several Rosemary cakes before, but not tried one. This looks delish x

I've never thought of adding a herb to a cake mix before. Sounds like a really interesting combo though (lets face it Nigella hardly ever gets those wrong lol)
Great looking cake, glad you had better results this time round.

That sounds really interesting. I've never had a herbed sweet cake before. Would love to try a slice

I made Nigella's Rosemary Madeira Cake and was surprised at how great the cake actually tasted.

That looks lovely! Sometimes a simple loaf cake like that really is the best. I wonder if this is the same as the rosemary cake she has in Feast?

Thanks for your comments! I have to admit that I was really pleased with this cake - the texture is lovely and smooth and creamy and the rosemary is present but not overpowering. Don't let herbs in a cake put you off!

Foodycat, if you mean the Rosemary remembrance cake in Feast, no, it's not the same recipe. The basic proportions are similar, but there is a stewed apple used as part of the mixture. I've had my eye on that recipe too!