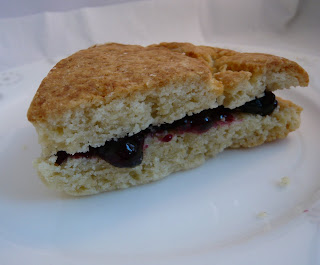 I found myself with half a tub of clotted cream that I was very loathe to waste and much as it would have been rather delicious eaten all on its own or with a few berries, I feared that I might not be able to moderate my consumption! There's something truly delicious about clotted cream, and breaking through the crust is such a pleasant sensation. Mmmmm, buttery creaminess! If you want to know more about clotted cream, visit the Rodda website, and you can find out more about the history of the product. I decided to bake this rather delicious shortcake, which I could then freeze and enjoy at my leisure. Spreading the enjoyment of the clotted cream even further if you will!

The recipe I decided to use was this one from Dan Lepard. Because I only had half the amount of clotted cream I halved the recipe (naturally!) and I also used self raising flour, omitting the baking powder specified in the recipe (sorry Dan, that's what I had to hand!). I forgot to brush with milk and scatter sugar over before baking, but I'd do that next time because a bit of crunchy sugar topping wouldn't go amiss here. Mine took a little longer to bake than specified, but perhaps my oven wasn't quite hot enough. I made one round with my half batch, not two small ones, and instead of layering the two pieces as specified in the recipe, I split mine and served it with jam. You could add whipped double cream for extra enjoyment, but my fridge is currently occupied by low fat plain yogurt :-( which wouldn't have quite the same effect!!! The jam you see is blackcurrant, which I love, but in this situation I actually preferred strawberry.
The shortcake was rich and moist and delicious and seems to keep better than the scones I usually make. I started to wonder what the difference between shortcake and scones is, generally speaking (i.e. not compared to this recipe using clotted cream) and to my untrained eye there doesn't seem to be much. Shortcake recipes seem to use a higher proportion of fat to flour and sugar, and are often baked as a large (6-7"/15-18cm) round, rather than being individual as scones are but I think that's it. Shortcake to me is a more American treat, whereas scones are more traditionally British. Feel free to correct me though! 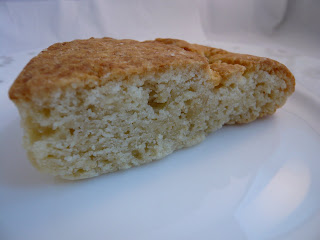 Looks yummy and the perfect thing to munch on at the weekend. I like how you baked it as one big round.

They look so tempting - totally yum.

This looks really good. I was wondering the same about shortcake and scone differences. Maybe it's adding sugar to shortcake but not to scones? Whatever, adding clotted cream sounds wonderful.

Never had a shortcake before but think I may need to try one now ;0)

wow - what a recipe; it takes too fab indulgent things and makes them even better!

If you try the recipe again, you might want to leave in a little of the baking powder - scones/shortcake usually benefit from a little extra raising agent above what's normally in SR flour.

Choclette, I usually add sugar to my scones anyway. Not a lot, but it is there!

Suelle, thanks for the tip, I'll leave a little of the baking powder in next time for a bigger rise, although I was happy with the rise, texture and taste of this shortcake.

Definitely I think scones are more British but I like them much more than shortcake. I go to this English tea restaurant here. They serve these amazing scones- these totally remind me of them. I have been searching for a recipe such as this for a long time.