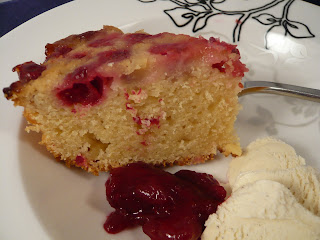 Having spent Christmas very enjoyably at J's house, she came here for New Year and I cooked for the two of us. For dessert I decided on a cake based around Dan Lepard's stone fruit yogurt cake, which I made back in October. To give it a seasonal twist I decided to use cranberries - they seem to be one of the few fruits that are still available seasonally, along with gooseberries. Thankfully (like gooseberries!) they freeze well, so I've bought a couple of bags for the freezer too.

I halved the recipe (as there were only two of us) and baked it in a 6" tin for the same amount of time specified in the original recipe. This worked really well, so I must remember for the future that an 8" cake recipe can be halved to fit into a 6" tin.
I will give the ingredient amounts I used below, but suggest you check out the link to Dan's original recipe for the method. I served the cake with a cranberry sauce made by simmering around 175g cranberries with 30g light muscovado sugar for about 20 minutes until the cranberries are soft and have mostly exploded. This made a very tart sauce, which was a good foil to the creamy vanilla ice-cream and delicious moist cake. However, if you wanted to serve the sauce on its own, I would suggest increasing the amount of sugar substantially.
I really enjoyed this cake, it's moist and has a satisfying bite, and the contrast of the tart cranberries with the relatively sweeter cake is a lovely combination.
Cranberry upside down cake
Ingredients
Enough cranberries to cover the base of your tin, around 125g for mine, I think!
12g light muscovado sugar to sprinkle over the cranberries
90g caster sugar
90g butter, softened
1 large egg
90g thick greek yogurt
1 tsp vanilla extract
40g semolina
90g self raising flour 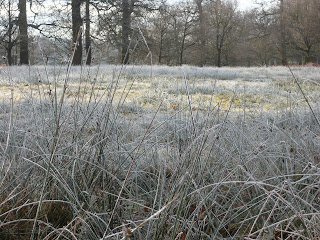 On New Year's Day we went a walk in the local nature reserve (along with half of the local population I think!) which was very cold but really rather beautiful. A lovely start to 2010. 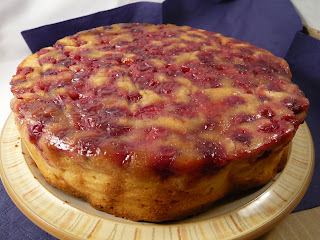 I also made a larger version of the same cake to share with colleagues before the Christmas break. They also seemed to enjoy it! You can see from the edges of the cake that the foil lining of the tin doesn't improve the cake asthetically, but it makes it much less messy to bake, and it's a breeze to line a cake tin with foil rather than parchment paper - just push the foil in and squash the creases out!
Posted by Caroline at 22:57

This looks delicious and so moist, if you were accepting orders for these then would be placing one! Lovely photo too. Happy New Year, Lucie x

This looks gorgeous and so festive.

It looks stunning and so festive.

I do love cranberries, this is a great cake!
Happy New Year!

I love upside down cakes and this one looks particularly colourful.

I keep meaning to bake something sweet with cranberries - your cake looks fab!

I have never made a cake using cranberries. It is perfect for the winter. The cake looks wonderful.
Happy New Year!