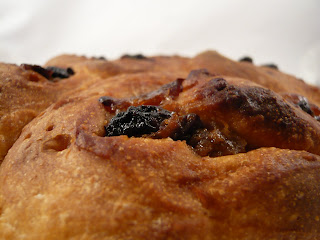 Well, it's a good job that my new year's resolutions didn't involve blogging more often or more regularly, because I most certainly would have had to call that resolution broken! Sorry about the gap, but I'm back, and with something really delicious to make up for it!

Last year I made mincemeat, and as the festive season rolled around again I decided it was time for another batch. I used the same recipe (Delia Smith's version) as last year (I've noted the quantities I used at the bottom of this post, as they differ slightly from her recipe - I like glace cherries in mine, and no nuts, plus a little more spice), but this year followed her instructions to stir as the mincemeat cooled, which resulted in no fatty white blobs (this pleased me greatly!). Sadly, with one thing and another I didn't find time to make any mincepies at all this year. In fact, writing this has made me realise that I didn't even eat any this year. Hmmm, that ought to be rectified. However, I believe that mince meat shouldn't just be for Christmas, but for all year round. (Ok, well, perhaps all winter..... even I don't think I want mincemeat in the heat of summer) And if you've got half a jar of mincemeat hanging around the cupboard, asking to be used up before it is forgotten in favour of newer flavours I would ask that you try these rather delicious rolls. These were sort of inspired by chelsea buns, but I can't ever remember eating a chelsea bun, so it was more just the shape that gave me the idea. 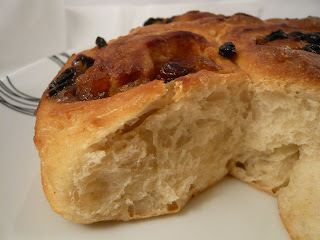 Anyway, the recipe is a milk loaf dough and as ever, I used Dan Lepard's technique for kneading the dough, which makes the whole thing no effort at all, as the short bursts of kneading fit around other things I'm attempting to do at the same time. The technique is explained well towards the end of this white tin loaf post.

For the glaze - icing sugar, a lemon

Method
- Scald the milk - bring up to the boil and then allow to cool to blood heat (so you don't kill the yeast!) This seems like a pain to do, but as Dan explains here, you need to denature one of the enzymes in the milk that would contribute to heavy bread. If you really can't be bothered, don't scald it, the results won't be that bad!!!
- Mix all ingredients together in a large bowl and leave for 10 minutes. Knead for around 10 seconds on an oiled surface, then cover and leave for 10 minutes. Repeat. After the third knead, leave for 30 minutes or so, then roll or stretch the dough to form a rectangle about 12"(30cm) long by roughly 7-8"(18-20cm) wide.
- Spread the mincemeat over the dough, leaving a small border at the edges. How much you use depends on your taste (and how much you've got left to use up!) - if you love mincemeat use a bit more and get a thicker layer, it's up to you.
- Roll up so that you've got a long thin roll rather than a short fat one (i.e. roll lengthways) and then cut the roll into seven. Arrange them cut side up in an 8" (20cm) cake tin. I lined the edges of my tin with parchment because it was loose bottomed and I didn't know if the mincemeat would leak goo onto the oven, but it didn't, so you could probably get away with a greasing of butter around the tin.
- Leave to rise until the rolls have filled out and are touching. When they are nearly at this stage (oh, the accuracy of this recipe!) preheat your oven to 200C/Gas 6 (only you know how long this will take, hence the vague instructions as to when to preheat!).
- Bake for around 30-35 minutes (although in all honesty I can't remember quite how long they took - check at around 25 minutes - I should really pay more attention....) until golden brown. Remove from the tin (this is where the loose bottom really helps!) and turn over to check they sound hollow when tapped (I agree this isn't a great way of checking, but because they're only shallow they should cook through ok).
- Leave to cool on a wire rack.
- Make the glaze to your favourite consistency - sticky/runny, whatever you want, by mixing lemon juice with icing sugar. Drizzle over your buns and enjoy!!! 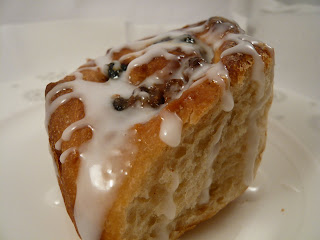 These were soft and luscious when first cooked, and the lemon in the icing contrasted well with the rich, spicy mincemeat filling, which in turn was complemented by the soft, slightly sweet dough. Yum! They don't keep particularly well though, so in the event of having any left over (as if!), freeze them and enjoy by warming through in the oven.

Mmmmmmmmmmmmm - yummeeeee!! I must try making these.

What a fantastic idea !! I have some precious mincemeat leftovers just ready !! Thank you !