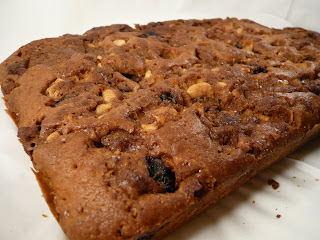 I have been admiring the rather delicious looking cakes being baked by the Cake Slice Bakers group over the past twelve months and sort of wishing that I could join in, but at the same time being thankful that I didn't need to buy a third cake tin for the third layer that many of the cakes made by the group required. The book last year was Sky High Irresistible Layer Cakes. (Or indeed, transporting the resulting delicious confection to work - nigh on impossible on a bus!) However, when Katie over at Apple and Spice (you really have to check out her blog - her cakes are amazing and really inspired me to want to join this group!) mentioned that the group was opening up the membership to new members a while ago, I decided that it was now or never and in I jumped!
The book that the group is baking from this year is 'Southern Cakes - sweet and irresistible recipes for everyday celebrations' by Nancie McDermott. This is the South of the USA, not the south coast of the UK! so a note for UK (and other non-US) readers is in order about this month's recipe - coffee cake in the USA doesn't necessarily contain coffee in any way, shape or form, but is merely used to identify a cake which is consumed with coffee. Confusing no? So I haven't left out any ingredients from this recipe...... 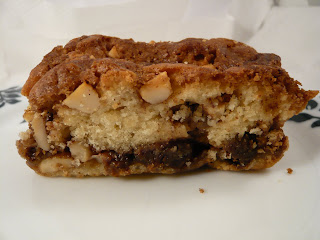 So my first recipe as a Cake Slice Baker was unfortunately one I can't actually eat unless I sub a fairly key ingredient. I therefore present Cinnamon-Cashew Coffee Cake! I really wanted to give this cake a taste and pecans and me don't mix, but luckily I can still eat cashews, so I could still get the crunchy texture the recipe is asking for. This cake was very easy to put together, which is good news as I'd left making it until the last moment through disorganisation. I decided, along with quite a few other members of the group, to make a half recipe, and baked mine for the same length of time in a 6.5x9.5" baking tin, which worked perfectly well.
I amended some of the quantities slightly - cutting down a little on the cinnamon as I'm not the world's greatest fan of cinnamon and I also converted the recipe from cups to grams. I've therefore given the recipe below so that readers who prefer metric measurements don't have to convert their own. I couldn't find a conversion for a cup of nuts though, so I guesstimated and serendipidously had about 100g nuts left in the packet, which seemed about right. I also replaced the specified all-purpose flour and baking powder with self raising flour because I prefer to use this.
Cinnamon-Raisin filling
150g light muscovado sugar
1 1/2 tbsp plain flour
1 scant tbsp cinnamon (original recipe states 3 tbsp for the full recipe, these quantities are for half)
110g raisins
100g cashews (or pecans if you can have them!), coarsley chopped
85g butter, melted
Coffee cake (without any coffee...... can you tell how much this confuses me!!!)
220g self raising flour
1 tsp vanilla extract
120ml milk (I used semi-skimmed)
110g butter, softened
100g caster sugar
1 egg
I didn't read the instructions properly and combined all of my filling ingredients together, which I wasn't supposed to do, but I can't see that it would have made much difference. Like many others, I found the batter very sticky indeed, and it was difficult to spread around the tin, but as in my recent plum oat slice, using slightly under half of the mixture for the first layer was a good move and made spreading the remaining layer over the top a little easier. Because there were two raisin/nut layers it didn't really matter if the top layer didn't quite reach the edges in some places. 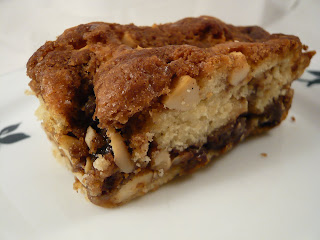 So how did it taste? Well, it disappeared in record time at work, so there must be something right about it! It smelled lovely whilst it was baking, filling the house with a warming cinnamon-y scent, just right for the autumn weather we've been having round here. The cinnamon flavour was quite strong and the texture of the cake was lovely and soft, a great contrast to the crunchy, chewy nutty raisin layer. The nuts weren't as crunchy as I was expecting, but then I've never had a cake with nuts in it before so I'm not sure if it's normal for the nuts to be quite soft rather than crispy. I suppose that might just be a feature of cashews and that pecans might be crunchier - who knows!!! I really enjoyed the cake though - it was lovely to hit a little pocket of sweet sugar - and there were plenty of them dotted throughout the cake.

Thanks for a great first recipe - I've looked through the book and am really looking forward to making more from it over the next year! Don't forget to check out the other Cake Slice Bakers posts here at the blogroll.
Posted by Caroline at 09:00

Welcome to Cake Slice and your substitution sounds delicious as well. Great job!

Yay I'm so pleased you decided to join us. Your cake looks fab and I'm glad you were able to substitute the pecans. I agree that the term "coffee cake" used to confuse me too. Sort of like the UK and our teacakes - they don't always contain tea!

This cake looks lovely - I really like cakes with nuts in. Jen

Welcome! I'm a newbie too.

What about subbing almonds in for the pecans? Cashews tend to be a softer nut. Toasting them before can add extra depth of flavor as well. If you ask me, it's a delicious cake either way.

I like that you subbed the cashews for the pecans. make it the way you like it.

welcome to the group!

Welcome to the group :)
I said no to raisins and said yes to choco chips :) You did well.

I just wanted to stop by and introduce myself- My name is Joy and I’m another one of the newbie Cake Slice bakers. I’m really looking forward to meeting other members, and I hope to have the chance to get to know you better as we bake our way through Southern Cakes :)

Your coffee cake looks delicious, and I love the substitution of the cashews- I never would have thought of that, but it sounds lovely! I'm glad you (and your lucky co-workers) enjoyed it. It was a big hit with my tasters (also known as my family) did too!

If you have a chance, I’d love for you to stop by my blog, “Hot Oven, Warm Heart,” and say hello- it’d be wonderful to hear from you!

Have a great rest of your week and a relaxing weekend!