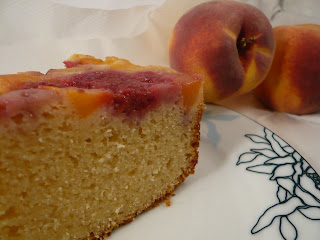 You will note that the title of this post is in fact not quite true.... raspberries obviously not being a stone fruit! However, the premise of Dan Lepard's recipe is to use up nectarines, plums or peaches past their best. I had the nectarines but I also had raspberries which were threatening to go off if I didn't use them up quickly. Hence the combination of raspberry and nectarine here. I feel that it's following the spirit of the recipe so hopefully Dan won't mind this variation! I also had the necessary Greek yogurt for this recipe languishing in the fridge, so when this recipe was published at the end of September (find the original article here on the Guardian website), it pushed it's way past everything else on the 'to bake' list and ended up at the top. And I'm so glad that it did! This is a stunner, both visually and in terms of taste. I love the way the fruit is on the top of the cake when you flip it over all juicy and inviting.

It's a little while since I made it, but from what I remember, I followed the recipe pretty closely. I omitted the lemon zest as I wanted the flavour of the fruit to come through (and I didn't have three lemons, and even if I had had the lemons I was in a lazy mood that didn't run to zesting three lemons..... sorry!). I used two or three nectarines (rubbish memory) and about 100g raspberries - the amount of fruit just covered the base of the tin, which seemed right to me. I also used demerara sugar to sprinkle over the fruit rather than caster, just because I seem to have an excess of demerara sugar at the moment.

I wondered about Dan's instruction to line the tin with foil, and just lined mine with baking parchement as usual. I understood the instruction once the cake was cooked and some of the caramelly syrup formed by the fruit juice and sugar had escaped onto the bottom of my oven..... ah well, it was only a little escape and didn't affect the cake!

The cake had a beautiful gentle peak when it was cooked, which was fine, but when it came to turning the cake onto a cooling rack, the peak meant that the base of the cake started to come apart. I quickly transferred the cake to my cupped hand and struggled to get the lipped plate you see in the pictures out of the cupboard one-handed to hold the cake and prevent the base cracking open. Luckily I succeeded (no mean feat when you're holding hot cake in one hand and attempting to wrestle a plate from the bottom of a heavy pile of plates!) and the cake didn't crack or break. 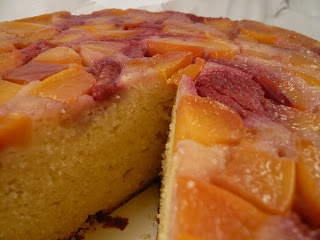 I was really pleased with the way this cake turned out - a perfect peach melba cake! The yogurt in the mixture added a beautiful smooth richness to the cake, without being over-rich as I have occasionally found soured cream to be and I will certainly be making this cake again. In fact, there's more yogurt in the fridge this very moment. I think this would be perfect with some chopped fresh peach or nectarine and either a spoonful of the greek yogurt or a little drizzle of cream.
Posted by Caroline at 07:00

Now you keep on posting all of these superb 'Dan' related goodies, I must keep a better look out on his site.
The cake looks delicious and uses two of my favourite ingredients fruit and yogurt.

The cake looks lovely and the colours beautiful. You did well holding the cake in one hand! I like using yoghurt in cakes too

I love your cake! It sounds delicious and a great way to enjoy fruits :)

My kinda cake! I love the close texture of the sponge - you always get that with a yoghurt cake and I find it delicious.