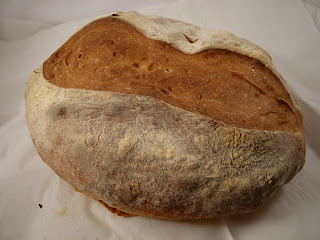 Simple white loaf
Not such an attractive picture as this one, but the picture that Dan provided for this bread was so stunning that I just had to try and make it. The article contains lots of helpful tips to make your breadmaking failsafe, so I really recommend reading it, here on the Guardian website.

So, back to the bread. I was quite pleased with the way my loaf came out - not as visually stunning as Dan's, but good all the same. Unfortunately I think I may have added a little too much water to the dough because when it came to proving the dough, it was happily expanding sideways into a flying saucer - not really what I wanted at all. So I quickly reshaped the dough into a more acceptable form and stuck it in the oven straightaway. I'm sure this is breaking some important bread-making rule, but this dough does seem pretty failsafe. I think this accounts for the large holes I had in the crumb, especially near to the edge of the loaf.

It was pleasant enough to eat, especially given the rapid method used to make it, but I wasn't quite sure about the texture - it seemed almost bouncy - I can't think of a different way to describe it. I'm not sure if this was just my flour though - I'll try a different brand next time. 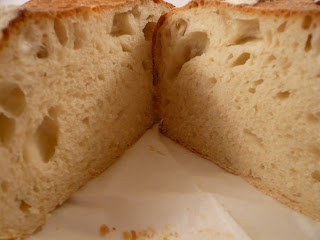 You can see that the texture is slightly uneven with some holes, especially around the edges. 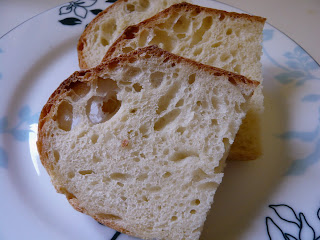 Good for lunch though, or for toast - yum! 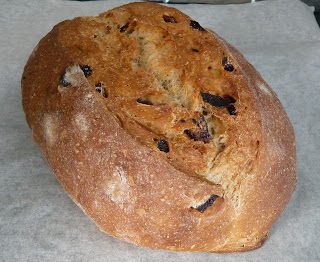 This was actually the first loaf I made according to the recipe's principles, and I was so impressed with it that I went on to make the white loaf above and have subsequently remade it too - it makes fabulous toast with lots of butter for breakfast, or a great lunch paired with cream cheese.

I thought it came out beautifully, with the gorgeous crack down the centre opening right up, and the colour was helped by the proportion of wholemeal flour I added to the recipe, along with the tray of boiling water put into the oven as Dan suggests. I don't quite know what inspired me to combine dried apricots with wholemeal flour, or even to try putting dried apricots into bread at all, but I'm really glad that I did, because this is a great loaf. I have a slightly ambivalent relationship with dried apricots - ate them a lot as a child, but recently I need to be in the right mood to enjoy them, and don't usually want more than one or two at a time if they're 'au naturel' but I'd bought some naturally coloured apricots on offer and wanted to use them. I thought wholemeal flour would be a good partner, but didn't want to go totally wholemeal, so just used 1/4 wholemeal bread flour and 3/4 white bread flour. I added 150g dried apricots to the loaf the first time, and then about 85g the second time (finishing up the same packet!) and prefer the loaf with the larger amount. This is rapidly becoming my favourite breakfast bread, thanks Dan!!! 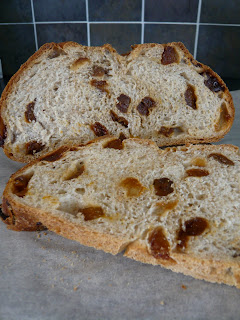