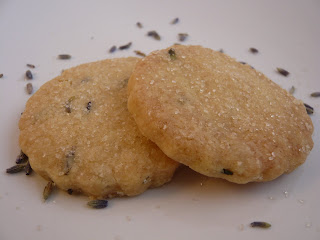 Lavender isn't a scent I particularly associate with baking, but I've seen a few recipes using it and my interest was piqued. What would lavender be like as a flavour rather than a scent? I kept an eye out for lavender in the shops because although it would be really lovely, and ideal to use dried homegrown flowers there's not a chance of me being able to do that. I really do love living in England, and in the North of it too.... most of the time. It's just that on the West side our summers are cool and damp - no sign of the barbecue summer forecast by the Met Office here (yes, I know they've now taken this back and said that their original prediction was only a 65% chance of good weather - seems like fairly rubbish odds to me, only just over 50% chance of good weather, but never mind!). Anyway, my garden is particularly wet and after heavy rain there's often standing water. Lavender bushes like to be dry, so like I say, no chance of homegrown lavender here. However, undeterred, I managed to source dried lavender flowers and set about making this recipe. I'd originally thought of cupcakes, but decided biscuits would be a good start to my lavender adventure. 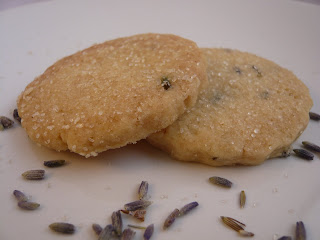 I chose a fairly basic shortbread recipe, based on one I found in a little book called '200 cakes and bakes' that I've recently acquired. I think it was a little treat to myself recently to celebrate pay-day or some other non-celebration (i.e. I just wanted a new cook book!!!). Anyway it's already bristling with post-it notes marking the pages of recipes I want to make soon so I think it was £4.99 well spent!

Method
- Place flour and semolina in a roomy bowl. Add butter and rub in until the mixture looks like breadcrumbs.
- Stir in sugar and lavender and then squeeze the crumbs together to form a ball of dough. I found it easier to make two smaller balls. It looks as if the mixture will never come together, but it does - just keep squeezing. I think it must partly be the warmth of your hands that helps bring it together.
- Form into a log, wrap in clingfilm and refrigerate for 30 minutes.

- Preheat the oven to 160C/Gas 3 and line two baking sheets with parchment paper.
- Remove the dough from the fridge and roll out on a lightly floured surface. I found the dough broke up a lot, but perservere. It was easier to work the dough if I worked it and warmed it up in my hands slightly before rolling.
- Cut out biscuits to your desired size. Mine were 2 inches (5cm) and I got about 35 biscuits 1/2 cm/ 1/4 inch thick, roughly. Place on baking sheets as you cut, and keep re-rolling the dough to get the last few out. Sprinkle with a little extra caster sugar for a lovely crunch when baked.
- Bake for 10-12 minutes until lightly golden (although mine definitely took longer than this to become light gold, probably up to 20 minutes).
- All to cool on the baking sheet (although I'm not sure why the recipe said this!).

Perfect for a little pick me up, the lavender flavour wasn't overpowering at all, as I had worried it might be. It was subtle and pleasant, and I'll be baking with lavender again, and not just because I've now got a little pot of it to use up! I'll be using the biscuit recipe again, they were light and buttery and flaky and crunchy - everything I was looking for in them!

Slightly mixed reviews at work. All but one loved them. That one couldn't bring herself to try them because lavender reminded her of the hot-water bottle that she used when she was in pain. Everyone else had no such qualms, and pronounced them a success, as did J when she visited recently!
Posted by Caroline at 18:48

i really love lavender cookies. everytime i bring it up, my friends start twitching their noses. still love it though. love their delicate scent and flavour and they're always beautiful to look at!! :) x

I just had a Lavender shortbread cookie for breakfast this morning and was thinking I need to make these. They cost me $1.75 for 2. A rip off but a great little cookie to make.

These cookies look lovely! I have a lavender bush that has just blossomed, might have to try this recipe.

I've always been a little bit wary of lavender in food; I associate it too much with perfume and room fresheners! However, the fact that all but one person loved these biscuits is making me reassess it - I guess it's all about getting the balance right so it isn't overpowering?

Maria, I used dried lavender flowers from Waitrose (Bart spices range) so I suppose you might have to dry your garden flowers first, I'm not sure.

CC, I was unsure of the flavour too, but used a scant tbsp and it really wasn't overpowering. I think next time I'll add some lavender extract I've got and see what a stronger flavour is like. As you say, room fragrance is not what I'm aiming for!!!

I can't bring myself to eat bakes with lavender added but I am pleased you did this 'on my behalf'! The biscuits look wonderful - great photo too.

I've never tried lavender in cookies but I can imagine they taste wonderful. The certainly look lovely!